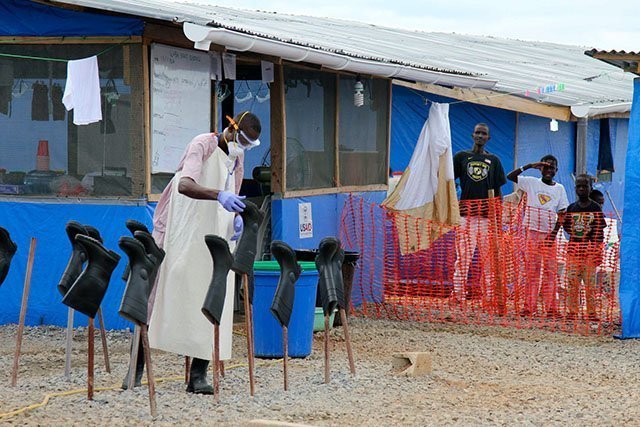 A worker disinfects boots as people look on in the "red zone" where they are being treated for Ebola at the Bong County Ebola Treatment Unit in Gbarnga, Liberia, Oct. 28. Dr. Timothy Flanigan, professor of medicine at Brown University School of Medicine and permanent deacon for the Diocese of Providence, R.I., left his wife and five kids in August and traveled to Liberia to treat Ebola victims because ìI thought I could make a difference.

VATICAN CITY (CNS) — Dr. Timothy Flanigan, professor of medicine at Brown University School of Medicine and permanent deacon for the Diocese of Providence, R.I., said he left his wife and five kids in August and traveled to Liberia because "I thought I could make a difference."

As the Ebola epidemic continues, killing thousands of people in West Africa and leaving millions of others without health care for other diseases, Flanigan spent two months working with Liberia’s National Catholic Health Council teaching staff a totally new way of treating patients: "no touch care."

"It’s strange. It goes against everything we do, but the medical system is closed down by and large because of the risk of infection," he said Nov. 4 at the end of a meeting sponsored by Caritas Internationalis, the umbrella organization of Catholic charities around the world.

Flanigan said it was difficult resisting the temptation to put his hands on his patients’ shoulders and even to listen to their hearts and lungs. Instead, to avoid catching the virus, he wore protective clothing, washed his hands continually in bleach water and asked patients to describe their symptoms and tell him where it hurts.

"We use more antibiotics that way," he said, but his patients — like his family — "expect me to be safe."

In person or by Skype from West Africa, those involved in the Catholic response to the Ebola epidemic met at the Vatican to discuss ways to coordinate their efforts, share best practices, increase Catholic aid to the hardest hit countries and begin planning for the post-epidemic recovery, including the care of children orphaned by the virus.

Msgr. Robert Vitillo, health adviser for Caritas Internationalis, told reporters that in addition to caring for the sick, with support from Catholic charities around the world, Caritas in Sierra Leone and Guinea conduct community mobilization and education projects. Caritas Liberia is about to launch a similar program.

Because the Ebola virus is spread through direct contact with the bodies of those infected, the World Health Organization, which is coordinating worldwide response to the disease, has mandated that the bodies of Ebola patients be buried without family members washing them first and only in the presence of professionals wearing protective gear. Msgr. Vitillo said that Caritas explained to WHO officials the importance for many people of having at least one relative and a member of the clergy at the burial, so official policy now allows that to happen, although they must stay at a safe distance.

Edward John-Bull, director of Caritas Sierra Leone — where, in late October, the number of new infections was increasing more rapidly than in Liberia — said he had heard stories of relatives trying to bribe health care officials to certify a deceased family member as negative for the virus so a normal funeral could be held, thus increasing the risk of infection for the family.

Throughout West Africa, speakers said, people suspected of having the virus are placed in quarantine for 21 days or in holding centers while they await the results of blood tests.

The quarantine means no possibility of working and almost guarantees quarantined families and villages must rely on food aid for survival.

Camillian Father Aristelo Miranda, who recently returned from Sierra Leone, said he visited a village that had 20 confirmed cases — 17 of whom died — and another 70 people who were suspected of having the virus. The entire village was quarantined under military guard. When anyone got a fever, the 21-day quarantine for the entire village would restart.

"The village was quarantined for two and a half months," Father Miranda said.