Catholic Church has an extensive history of missions in the U.S. - Catholic Courier 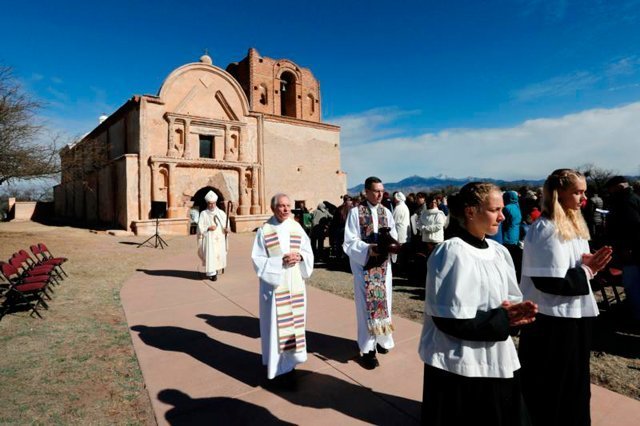 After celebrating Mass Bishop Gerald Kicanas of Tucson, Ariz., walks with his crosier outside the mission at Tumacacori National Historical Park in Tumacacori, Ariz., Jan. 10. The Mass was part of the park's Kino Legacy Day marking the 325th anniversary of the Jesuit missionary's first visit to an O'odham village there.

WASHINGTON (CNS) — There is an extensive history of Catholic missions in the U.S.

Though the original 13 British colonies in what is now the U.S. largely had Protestant populations, Catholic missionaries helped shape the economic, political and religious values as other parts of the territory were settled.

Religious orders began to establish missions in Spanish Florida as early as the 16th century as a way of attracting members of Native American tribes to Catholicism.

Dominicans founded missions in other parts of the South, the Jesuits began setting up theirs in the Great Lakes and Mississippi Valley regions in the 17th century, and Franciscans began building theirs in California in the 18th century.

Many Catholic scholars consider St. Junipero and other North American missionaries — such as Jesuit Father Jacques Marquette — to be founding fathers in U.S. history, nearly as much as George Washington, John Adams and Thomas Jefferson.

"While our nation state did emerge in a particular place, our continent has a complex and deep history, one that is as Hispanic and Catholic as it is Anglo and Protestant," said Steven Hackel, a professor at the University of California Riverside and author of "Junipero Serra: California’s Founding Father."

Like the U.S. Catholic home mission dioceses in the 21st century, the primary responsibility of the early American missionaries was to bring their religion to the inhabitants of the land.

By the time the Jesuits began to make their settlements in the Great Lakes region, they believed that humanity was all one and that the original revelation was God had been delivered to everyone on earth, but somehow the message had gotten lost, muddled or confused by many, said Tracy Leavelle, an associate professor at Jesuit-run Creighton University in Omaha, Nebraska, and author of "The Catholic Calumet: Colonial Conversions in French and Indian North America."

"So they looked for what they called ‘natural religion’ in native peoples, the vestiges of that original revelation," Leavelle told Catholic News Service. "They thought that was something they could work with. So, they were bringing them back to God after they had been lost. I mean, that was their view of what they were doing."

Cities, rivers and mountains throughout California can trace their names to St. Junipero, the missionaries and the missions, many of which are still active churches.

San Gabriel Mission is considered the mother church of Los Angeles, home of the largest Catholic archdiocese in the country in terms of Catholic population.

Not only did the missionaries in these missions bring new religious practices to the native population, they also introduced them to agricultural, economic and political practices, Hackel said.

When Pope Francis canonized St. Junipero last September, he said a missionary’s life is exciting and brings joy and that sharing the Gospel is the way to keep experiencing the joy it brings and keeps the heart "from growing numb from being anesthetized."

Catholics in the U.S. and other parts of the world are indebted to St. Junipero and thousands of other witnesses who lived their faith and passed it on, the pope said during the canonization Mass in Washington.

The pope acknowledged that some people objected to his sainthood cause because of questions about how then-Father Serra had treated the native peoples of California and about the impact Spanish colonization had on the aboriginals throughout the Americas.

Some groups objected to the canonization because they said the missionaries eradicated the culture of the indigenous people they encountered.

"Mission is never the fruit of a perfectly planned program or a well-organized manual," Pope Francis said. "Mission is always the fruit of a life which knows what it is to be found and healed, encountered and forgiven."