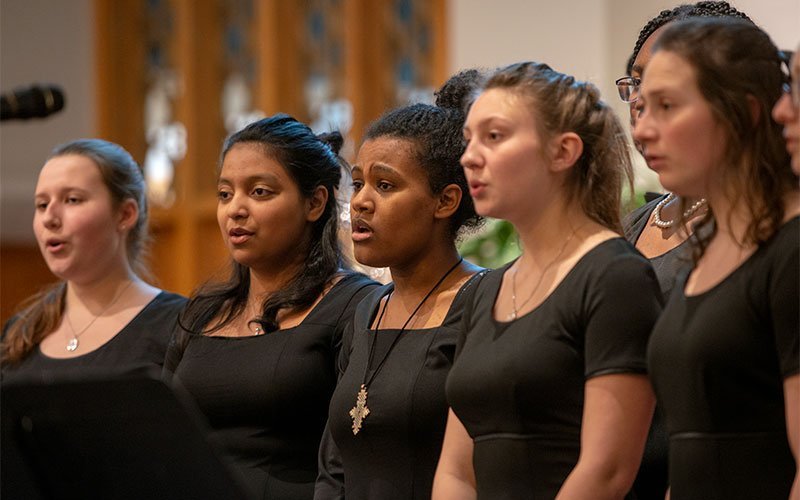 HENRIETTA — For the man who famously declared “I have a dream,” a gathering held Jan. 17 at Guardian Angels Church may well have rated in his eyes as a dream come true.

The spirit and vision of Dr. Martin Luther King Jr. was on full display that evening, as folks representing various religious and ethnic backgrounds filled most of the church for the 12th-annual Martin Luther King Day Celebration. With a theme of “Love Overcomes,” the public event featured speeches, music and skits in honor of the famed civil rights activist. In attendance were speakers and dignitaries representing the Rush-Henrietta Central School District, the towns of Henrietta and Rush, and the two towns’ Interracial Clergy Council.

A strong sense of harmony and goodwill marked the 90-minute program, with speakers paying tribute to King’s tireless efforts toward unity and love rather than division, hate and violence brought on by racism. The speakers implored audience members to treat each other equally, be inclusive, build bridges rather than walls, and be sensitive to the plight of those who continue to be adversely affected by racism and poverty. Quotes by King were recalled several times during the program, as were the struggles that he and his supporters endured during the civil rights movement in the 1950s and 1960s, as well as the transformative social progress that their efforts spawned.

The importance of King’s contributions also is acknowledged by the U.S. Conference of Catholic Bishops, which in November 2018 approved the statement “Open Wide Our Hearts: The Enduring Call to Love, A Pastoral Letter Against Racism.” According to that letter, “The leadership of the civil rights movement, especially that of Rev. Martin Luther King, Jr., invited ecumenical and interreligious cooperation, as was seen when Catholics, Protestants, and Jews marched together. That spirit is integral to the fight today, and in some communities, the success of this effort will very much depend on this kind of collaboration.”

Among those who attended the Jan. 17 program was Deacon Tony Mercadel, deacon emeritus at St. Marianne Cope Parish, which, along with Guardian Angels, comprises Good Shepherd in Henrietta and St. Joseph in Rush. Deacon Mercadel was one of the founding organizers of the celebration in Henrietta and Rush that has been held annually at various churches near the time of Martin Luther King Day. Deacon Mercadel, who is African-American, asserted that he lives by a code that God loves us all.

“So, we have to love everybody too,” he told the Catholic Courier, adding that this philosophy “definitely” lines up with King’s priorities.

After the formal program concluded that night, participants signed a petition in the refreshment area pledging to live out King’s ideals throughout the year. Meanwhile, Sister Sheila Stevenson, RSM, called the event “amazing,” saying she was especially pleased at the large number of young people who were on hand. She added that she’d like to see more unifying events throughout the year.

“Are there other ways we can come together, other times?” said Sister Stevenson, who serves as the first-year pastoral administrator of St. Marianne Cope Parish.

The celebration occurred on the heels of a local controversy involving race that eventually became national news. On Jan. 4, Jeremy Kappell, a meteorologist for WHEC TV-10 in Rochester, used a racial slur while pronouncing King’s name during a live broadcast. Despite his claim that the word he used was unintentional and the result of garbled speech, Kappell — who is white — learned two days later that he had been fired. Since then, widespread debate has ensued over whether the firing was justified.

Acknowledging the divisiveness brought on by the Kappell controversy, Sister Stevenson felt that the Jan. 17 event at Guardian Angels was timely because “something like this pulls us in the same direction,” she said.

Tags: Life Issues, Monroe County East
Copyright © 2023 Rochester Catholic Press Association, Inc. All rights reserved. Linking is encouraged, but republishing or redistributing, including by framing or similar means, without the publisher's prior written permission is prohibited.