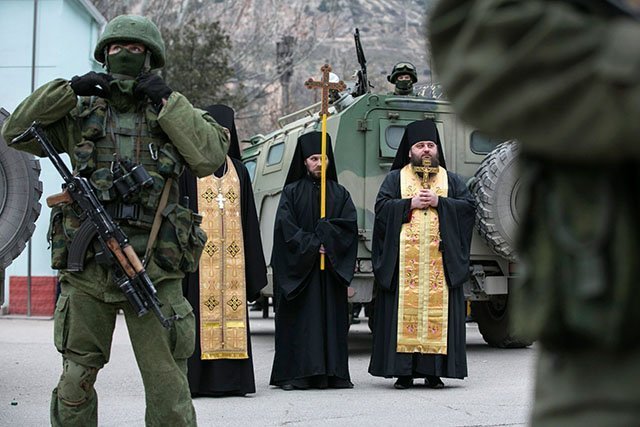 Orthodox clergymen pray next to armed servicemen near Russian army vehicles outside a Ukrainian border guard post in Ukraine's Crimean region March 1. Catholic leaders in Crimea say Ukraine has the right to determine its own future, and they urge prayers for peace.

Bishops called for prayers for peace, but a priest in the naval port of Sevastopol said the families of Catholic troops serving with Ukrainian and Russian forces were "deeply confused and worried" about the military confrontation in the Crimean peninsula.

Father Jerzy Ziminski, rector of the St. Clement, Pope and Martyr Parish in Sevastopol, told Catholic News Service that he had had no contacts with Russian commanders in the city, but said he had been "treated politely" and allowed through by occupying Russian units when he visited Ukrainian troops March 3 in their local barracks.

He criticized ethnic Russians who were staging independence demonstrations in the streets.

"They were sitting here like cowards, like rats under a broom — but as soon as the Russian army arrived, they went out into the streets," he said. "What’s the point of being here if you can only live behind a cordon, supported by a foreign army from beyond the Kerch Strait, and only occasionally appearing as an assembled rabble?"

Meanwhile, Bishop Bronislaw Bernacki of Odessa-Simferopol, whose diocese includes the autonomous republic of Crimea, said Catholics believed "every nation has a right to decide about its own future," and were asking Christians worldwide to "fast and pray for peace."

"The Catholic Church is deeply concerned about the evolving situation in our country, which is now one step from an open war that may involve a larger area," Bishop Bernacki told the Italian bishops’ conference news service, SIR, March 3.

"Policy changes must take place without external interference. Seeing how this fundamental rule of international conduct has now been betrayed, we urge all nations of the world to work together with Ukraine to bring peace and understanding."

Auxiliary Bishop Jacek Pyl echoed the call for prayers for peace in a statement released March 5 by the Catholic charity Aid to the Church in Need.

"With our prayer we reach out to all the people without concern for their religion, political views or ethnic background," he said.

"We pray that the people, who for tens of years live in peace — do not start fighting today and that the bloodshed of the kind we have seen in Kiev Maidan may be avoided here," he added, referring to violence in Kiev’s Independence Square that led to the ouster of Ukrainian Prime Minister Viktor Yanukovych.

In late February, pro-Russian gunmen seized key buildings in Simferopol, where Bishop Pyl is based, and blockaded nearby Ukrainian bases. On March 1 Russia’s parliament approved the use of military force in Ukraine.

The priest said parish life was continuing normally, although more people had attended Mass and received the sacrament of reconciliation since the Russian intervention.

After Russian troops entered Crimea, Major Archbishop Sviatoslav Shevchuk of Kiev-Halych, head of the Ukrainian Catholic Church, appealed to European Union leaders and international church bodies to show solidarity against Russia’s "invasion of Ukraine’s sovereign territory in violation of all agreements," and warned that the disruption of peace and stability in his country could "destabilize the whole global security system."

He added that the "deep and sincere wish" of Ukrainians was for "fraternal and friendly relations with Russia," and said he counted on foreign churches not to "be indifferent."