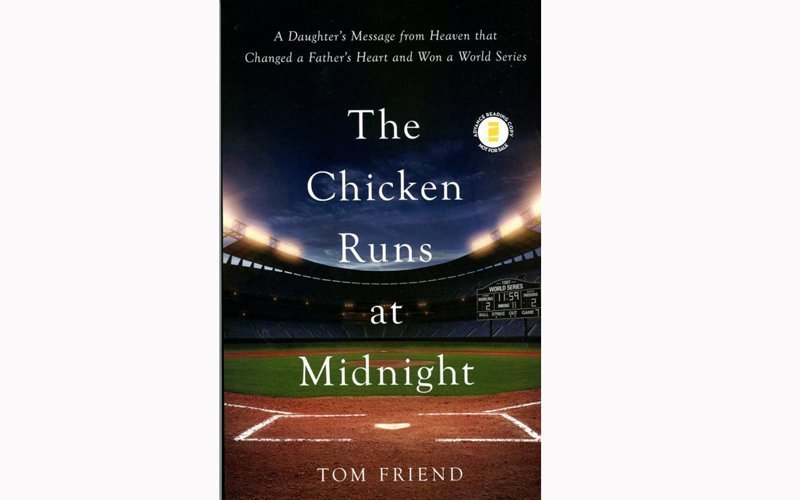 This is the cover of "The Chicken Runs at Midnight: A Daughter's Message From Heaven That Changed a Father's Heart and Won a World Series," written by Tom Friend. The book tells the story of strong-willed coach Rich Donnelly and his equally strong-willed teenage daughter Amy as she was battling brain cancer while her dad's team was making a playoff push. (Photo by CNS)

WASHINGTON (CNS) — Longtime baseball writer and broadcaster Tim Kurkjian has called it “the greatest baseball story ever told.” And one of its central characters is a Catholic who never played an inning in the big leagues, but got to coach for 30 years in the majors.

“The Chicken Runs at Midnight” tells the wildly improbable story of the strong-willed coach, Rich Donnelly, and his equally strong-willed teenage daughter Amy as she was battling brain cancer while her dad’s team was making a playoff push.

To make a great story short, it’s not the happiest of endings. She died in 1993, but the chicken indeed did run at midnight.

Donnelly, in a phone interview with Catholic News Service prior to the book’s publication by Zondervan in early October, talked about his faith, how he strayed from it — and how he regained it.

“I was a ridiculous Catholic,” said Donnelly, now 72.

“Besides being a priest, I don’t think there was anyone more religious in the world,” he said, recalling his youth: “Say your morning prayers when you wake up, say a prayer to St. Jude, the patron saint to helpless causes — which is me — say three decades of the rosary, go to morning Mass , do the Stations of the Cross, make a May altar in your room when you are 8 and keep in there until you are 17.

“I would pray to God all day. I’d walk my hometown of Steubenville, Ohio. It had 14 Catholic churches. I felt if I didn’t have a visit (when passing by), that was like a sin. So that’s what I did,” Donnelly continued. “When I was 8, 9 and 10 I celebrated Mass myself. I got a load of DiCarlo’s Italian bread. I made little hosts up, I had an imaginary congregation. I knew all the prayers in Latin — I was an altar boy — so I did all the Latin prayers by myself.”

Donnelly also became a standout baseball player from the tutelage of his father, who trained his sights on the boy after Donnelly’s older brother, a promising pitcher, died of cancer while still playing in the minors. The lad thought swearing was uncouth, and proclaimed he would never swear once he got into the minors.

He also never thought he would have sex before marriage. Or cheat on his wife. Donnelly admitted his focus on baseball took focus away from his family, which by then included four children, including Amy, his second child and first daughter.

“I was all Catholic-ed out when I was 16,” Donnelly told CNS. “There wasn’t much to do, so I went in a different direction, which was bad.”

He added, “My second wife, Roberta, she and Amy got me back in the baseline. I was at second base (metaphorically), and (instead of running to third) I was running to left field. I was going nuts and being wild. They got me thinking: When was I happiest? When I was a kid, when I was going to church, when I was saying my prayers.”

Donnelly said he thought that going to church while being active in baseball was a sign of weakness — until he went to church as a coach, and found one of his players at the same Mass.

It was that player, Craig Counsell — the Catholic manager of the playoff-bound Milwaukee Brewers — who was nicknamed “Chicken” due to his batting stance. And it was Counsell who scored the winning run in extra innings for the Florida Marlins in Game 7 of the 1997 World Series right around midnight — a fact pointed out to Donnelly by one of his sons, who was a Marlins batboy, as the rest of the team was celebrating on the field.

Yet as remarkable as all that was — especially as it had seemingly been prophesied by Amy years earlier when her dad was coaching another team, a club that didn’t even have Counsell on its roster — it nearly pales to Donnelly’s return to his Catholic faith.

“I prayed to God for funny things: ‘Put a priest into my life like the priest (he had) when I was growing up,'” Donnelly told CNS. “I got connected … in my hometown. Holy Family (in Steubenville). Msgr. Jerry Calovini.” The priest, he added, is “a baseball nut. He’s my confessor, he’s my adviser … someone who understands me.” He added, “In the winter, I go to Mass pretty much every morning with Msgr. Jerry.”

Donnelly also credits his second wife, Roberta, for his return to the fold. “When you ask for stuff, you might get more than you asked for,” he said. “She’s incredible. And she has become a biblical scholar, my pastors have told me. She teaches biblical classes to pastors! They give her a talk (to do) to three or four pastors. She writes notes and notes about the Bible and tries to translate what it means.”

Retired from baseball, Donnelly — who has beaten cancer twice himself — is not one to sit still. “I’m a world-class racquetball player. I play racquetball five days a week against guys who are in their 20s and 30s. I toss batting practice every day. I’ve been blessed. I don’t drink, smoke, use drugs. I never have and I never will. I got into racquetball. People tell me, ‘You’re not 70, you’re 50.’ But I can tell I’m 72 in the middle of the night!”

Donnelly also has a speaking tour pegged to the book’s release. Plus, “I got a lot of grandkids,” he said. “I spend a lot of time with them.”

Curiously, going to games doesn’t interest him. After three decades of big-league coaching — 17 of them under manager Jim Leyland in Pittsburgh, Florida and Colorado — sitting in the stands is boring to Donnelly, while coaching by comparison is “a fast-paced chess game.”

However, he’ll waive that policy should Leyland — whose brother is a priest in Ohio — ever be elected to the National Baseball Hall of Fame. “Jim is my best friend in baseball,” Donnelly said.

Editor’s Note: More information about “The Chicken Runs at Midnight: A Daughter’s Message From Heaven That Changed a Father’s Heart and Won a World Series,” written by Tom Friend, is available at the publisher’s website, www.zondervan.com.