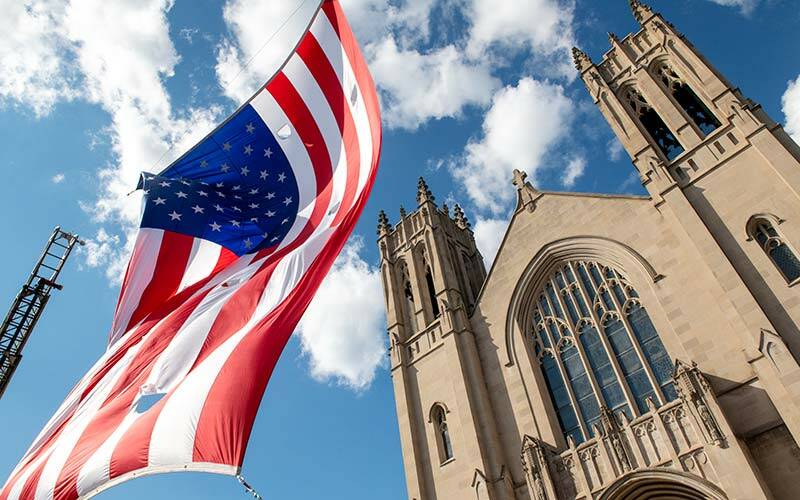 The Catholic Courier won a total of 23 awards, including an award for Best Newspaper, from the Catholic Media Association for work published in 2021.

Videographer/Video Producer of the Year: Chief Photographer Jeff Witherow received an honorable mention for his videography from 2021.

“The somber tone of the photo package’s subject is highlighted by the photographer’s thoughtful and varied choices to show both the grandeur and small details of this Sept. 11 event,” the judges wrote. “Particularly, the shot with the flag and cathedral against the sky, and a shot showing police officers’ caps are gorgeous examples of the photographer’s expert handling of scope and emotion.”

Witherow’s photo gallery of the first day of school for students at Catholic schools throughout the Diocese of Rochester received second-place honors.

“The photographer’s adept eye at using the rule of thirds is very successful to engage the viewer and emphasizes the lively feeling of the photos’ subject,” the judges commented.

The judges said, “the variety of camera angles (inside a tunnel, shot from a grassy field up towards children playing) work well to engage the viewer’s eye.”

“The production was diverse and thoughtful,” the judges wrote. “Smooth captions and fantastic layout. Links are effectively built into text. Excellent use of graphs, graphics and heat maps. The video is a nice walking tour and gets the pastor in a prominent place visually.”

“The piece is just excellent,” they added. “The story is very large and this production has clearly been assembled for some time. It is thoughtful and thorough and well-polished.”

Best Multimedia Package — Depiction of Religious Life: Latona, Capellazzi, Witherow and Staff Writer Jennifer Burke received an honorable mention for their multimedia project on the deacon and priest ordinations from 2021.

“This multimedia Lenten guide is beautifully organized, with tabs linking to resources for Ash Wednesday, Holy Week and other aspects of the season,” the judges commented. “Short embedded videos, written stories, livestreams and event listings all work together for an inclusive, informative and participatory experience.”

Best Web and Print Package: Latona, Capellazzi and Witherow won first place in this category for their city violence multimedia project and the story on city violence that appeared in the Courier’s October 2021 issue.

“A multitude of diverse web elements enhance the print package, including multiple videos, an array of relevant photos and infographics,” the judges wrote.

“This was a great advertisement,” the judges said. “The red background with white/black words was a bold choice and made for an eye catching piece.”

“I also really liked the playfulness of the smiling model acting like she is holding the Advent calendar and website,” one judge added. “The ad clearly lays out what they are promoting and all the different options.”

Best Coverage — Disaster or Crises: Latona won third place for his series of stories on the trend of violence in the City of Rochester and what Catholics can do to reverse it.

One judge commented, “I admired the ambition of this package and how nationwide concerns about increases in violence were made more local, approachable and put into context.”

Best Feature Writing — Non-Weekly, 6-Plus Full-Time Staff Members: Burke received an honorable mention for her feature story on the Christ the Redeemer statue on the grounds of Notre Dame Retreat House in Canandaigua.

Best In-Depth News/Special Reporting – Non-Weekly, 6-Plus Full-Time Staff Members: First-place honors went to Burke for her in-depth reporting on the safety and morality of COVID-19 vaccines.

“This story clearly and effectively addressed Catholics’ questions about how COVID-19 vaccines were developed and tested, and why the Vatican said it was morally acceptable for Catholics to receive the vaccines,” the judges wrote. “The piece conveyed scientific explanations in straightforward language and addressed misconceptions about the vaccines.”

Best Reporting on a Special Age Group — Children and Teens Younger than 18: Burke received second place for her feature story on students from Rochester’s Holy Cross School who raised money to buy toys for City of Rochester children.

“This is a story that puts a smile on your face,” the judges said. “The voices of the children are clearly heard, and their innocence shines through.”

Best Reporting of Social Justice Issues — Rights and Responsibilities: Second-place honors went to Latona, Burke and Witherow for their stories and videos on the Nourish New York food program.

“Well-sourced reporting on an important and growing social justice concern – food insecurity,” the judges said. “The reporting did a good job of connecting the issue with the Catholic faith and the mission to feed the hungry.”

The judges said, “The rule of thirds is applied well, with all points of interest at key places, especially the ball.”

Best Photograph — Catholic Education: Witherow received two honorable mentions in this category, one for a photo of a St. Rita School, Webster, student working on a computer, and one of a photo of a field-day event at St. Michael School, Penn Yan.