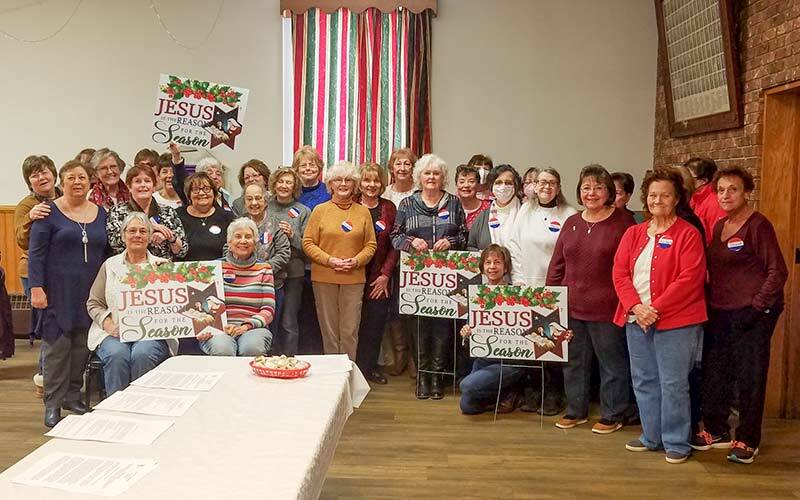 The Catholic Daughters of the Americas Court Theresa 806 is based out of St. Francis and St. Clare Parish in Waterloo and Seneca Falls. (Photo courtesy of Sara Ryan)

Barbara Robinson was “worried sick” when complications from a broken hip forced her to spend 53 days in the hospital in 2020. Her husband, Bob, was battling Parkinson’s disease, and she didn’t know how he’d manage without her.

Robinson’s fears were short-lived, however.

“The Catholic Daughters jumped in,” she recalled.

Robinson’s fellow members of the Catholic Daughters of the Americas’ Court Theresa 806 brought meals to her husband and checked on him every day.

“I never felt so taken care of, so loved. I was just overwhelmed with that, because I knew they were all good people, but until something happens, you don’t realize how somebody’s got your back,” Robinson said, noting that the women took care of her again in June 2021 when her husband passed away.

The members of Court Theresa are a tight-knit group, agreed Sara Ryan, the court’s regent. The court, which will mark its 100th year in 2023, is based out of St. Francis and St. Clare Parish in Waterloo and Seneca Falls but also has members from Our Lady of Peace Parish in Geneva. More than 75 women belong to the court, although approximately 30 attend each meeting. At least 10 women joined the court in 2021, and new members are always welcome, Ryan added.

“We want to welcome people, and we want their ideas,” she said.

One of the new ideas the court recently embraced involves building a stronger bond with the children of St. Francis and St. Clare Parish, she said. Since January, the Catholic Daughters have been praying for the parish’s confirmation candidates by name each day. And on April 1, they planned to serve a macaroni and cheese dinner for the candidates before the teens’ Living Stations of the Cross that evening. The group also hopes to host an ice cream social for the children in the parish’s faith formation later in the year.

Also new this year is the court’s Divine Mercy Prayer Group, which is a group of women who will spend time in prayer with dying individuals, at the request of those individuals or their families. Catholic Daughters also honor their own deceased members by providing an honor guard at members’ funerals.

“By being there we show the family that we care, too, and that we want them to feel our sympathy,” Robinson said.

Caring for others has been one of the hallmarks of the Catholics Daughters of the Americas for decades, Ryan said. These days, the members of Court Theresa hold three major fundraisers each year — a ziti dinner, a sale of homemade apple pies and a sale of Christmas signs — and use the proceeds to support local charitable organizations. In 2021, the Catholic Daughters also used a portion of their fundraising proceeds to support Catholic schools in the Finger Lakes region.

The fundraisers also double as great ways to build camaraderie among the Catholic Daughters, remarked Laurel Callahan. Prior to joining Court Theresa 20 years ago, Callahan had recognized women she saw frequently at Mass but did not really know.

“When you work together with people on the different projects, you get to know them better,” Callahan said.

One of those projects is the apple-pie sale conducted each October. Catholic Daughters spend several days together peeling bushels of apples, baking more than 130 pies from scratch and packaging the pies to sell.

“Some of the gals brought friends with them to do the peeling. They sat around the tables for a couple days peeling apples and talking and getting to know some of the women. We picked up a couple of new members after that,” Ryan said.

The close friendship shared among Catholic Daughters is as attractive to new members as the group’s charitable efforts, Ryan and Robinson agreed.

“That’s an experience I didn’t expect to have, but they’re so caring, and they check in, and that’s a big draw to me,” Robinson said.