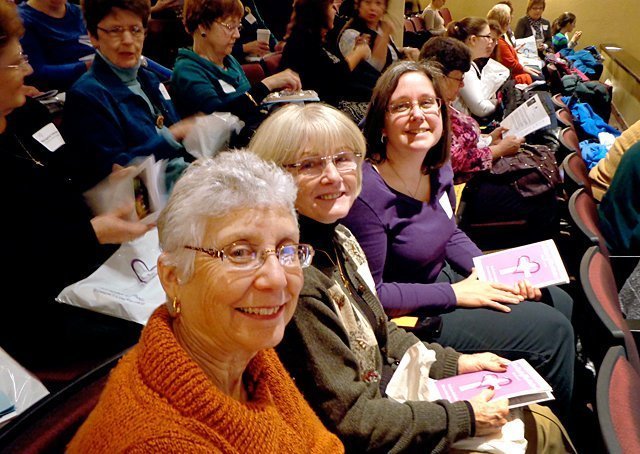 Kathy Peters (from left) and Janet Brown, members of the Catholic Daughters of the Americas, are joined by Gretchen Micio during the March 2015 Rochester Catholic Women’s Conference.

The Finger Lakes region is home to nearly 200 members of the Catholic Daughters of the Americas belonging to four different chapters, called courts, based at four local parishes.

Regardless of the size of its roster, each court shares the same motto of unity and charity, and the Catholic Daughters take that motto seriously, according to Terry Reape, regent of Court St. Michael.

"Our philosophy is to raise money to give it away, which is an awesome thing to do," she said.

The members of Court St. Michael hold three bake sales and a candy sale each year, with each typically netting at least $1,000. Those proceeds are used to support local charities and projects to benefit the needy in the area, Reape said. This year the members of Court St. Michael also worked with the local Kiwanis club to collect baby items for Care Net Pregnancy Center of Penn Yan, she added.

The members of Court Blessed Trinity put together Christmas baskets of food for the needy each year and this year also plan to distribute similar baskets around Easter, noted the court’s regent, Pat Younglove. The court also provides a scholarship each year for a graduating high-school senior who is an active parishioner and "an upstanding citizen," and supports diocesan seminarians with donations and letters of encouragement, she added. The members of Court Theresa make monthly donations to food cupboards, hospice programs and programs to feed needy youths, and members recently began offering a free weekly pancake breakfast that is open to all, according to the court’s regent, Teresa Dendis.

"We share our bounty with as many people as we can," Dendis explained.

The members of Court Gleason raise funds for local causes through bake sales, rummage sales and various other fundraisers, noted Regent Beverly DiSanto. They also contribute money to St. Joseph the Worker to offset the costs of heating the parish hall during their meetings, she added.

Members of the other courts support their own parishes and fellow parishioners in a variety of ways. The women of Court Teresa visit the area’s nursing homes twice a month to pray the rosary and play bingo with residents and host parish receptions twice a year. The members of Court Blessed Trinity visit with and bring Communion to the homebound and those hospitalized or in nursing homes and host a St. Patrick’s Day celebration for the parish. They also put on a celebration for children making their first Communion and provide them with rosaries or missalettes.

"We do things that are faith-based and spiritual as well and come together as a group and pray for each other," Reape added. "Our motto is unity and charity, and the charity part is obviously taken care of with the fundraisers, but we’re also a very spiritual group and we have some of the best women you will have ever known."

The Catholic Daughters make time for fun social activities together, such as Court Gleason’s annual mystery ride or Court St. Michael’s recent trip to a shrine for St. Marianne Cope.

"We’re just a group of friendly women that get together and have a laugh or two and do a lot of work and help those in need. I love being a part of something that matters," DiSanto remarked.

A similar passion for the group has kept Dendis involved with the Catholic Daughters for three decades.

"It’s just an absolutely marvelous ministry. I think it’s important for the life of the parish, because we rejuvenate the people to be active in a lot of things in the ministry of the church," she said.

"It helps me develop my own capacity as a Catholic woman and it reinforces my Catholic faith," Younglove added.

Dendis and Reape both noted that the organization has been plagued by a misconception that it is only for elderly women, which they say simply is not the case. In fact, Court Teresa holds half of its monthly meetings at midday and the other half in the evening to accommodate both retired and working women, and Court St. Michael has members that span several generations.

"It’s extremely multigenerational. I have a woman who is just 30 and a woman who just celebrated her 96th birthday. Each one of them brings their own perspective and unique abilities to the group," Reape said. "I think the dynamics of having a group where you can bring spiritual Catholic women together of all ages to share experiences and faith and love of God and family and church is just an amazing thing."