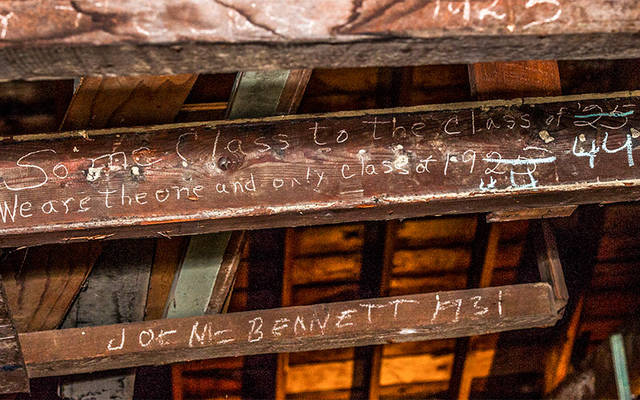 The attic at Holy Family School in Elmira contains messages from students dating back decades. (Photo by Rick Bacmanski)

Historically speaking, Catholic education in the Southern Tier features a combination of young and old.

Three schools — All Saints Academy in Corning, St. Agnes School in Avon and Holy Family Catholic School in Elmira — date back to the 19th century. They are joined by two comparative newcomers: St. Mary Our Mother School in Horseheads and Elmira Notre Dame High School, both of which were founded in the 1950s.

Here are brief histories of the five schools:

Located at 158 State St. near downtown Corning, All Saints Academy offers prekindergarten through eighth grade. Its principal is TJ Verzillo.

Known as St. Mary School for most of its history, the Steuben County facility is the oldest existing Catholic institution in the Southern Tier, having been established in 1855. For the school’s first five years, classes were held in the basement of St. Mary Church before the first school building opened in 1860. Seven years later, the Sisters of Mercy arrived at St. Mary School to take over teaching duties. A new, larger building was constructed in 1881, and additions were built in 1911 and 1960, respectively.

St. Mary School was renamed All Saints Academy during a series of consolidations beginning in the early 1970s.

St. Agnes School is located at 60 Park Place, on the north side of a traffic circle in downtown Avon and adjacent to the village park. The school offers prekindergarten through sixth grade, and its principal is Elizabeth Jensen. As the only diocesan Catholic school in Livingston County, St. Agnes draws students from many surrounding villages and towns. The school’s slogan is “Education with Heart and Soul.”

St. Agnes’ roots extend back to 1875 when the Sisters of St. Joseph established the first school in a wooden building that had once served as the church for St. Agnes Parish. In 1908, the school’s current brick structure was erected. More recently, in January 2019, St. Agnes School conducted a dedication ceremony to celebrate significant upgrades to its library and technology center.

Holy Family opened in 1898 as St. Mary School, only two years after Elmira’s St. Mary Southside Parish — formerly a member of the Diocese of Buffalo — became part of the Rochester Diocese. The school has been located at 421 Fulton St. throughout its history. Its principal is Paula Smith, who is in her first year in the position.

For many years the Chemung County school featured Sisters of St. Joseph on its faculty. In 1986, its name changed from St. Mary to Holy Family Primary School (prekindergarten through third grade) as part of a consolidation with other local Catholic schools. In 2009, it became Holy Family Elementary School (pre-K through fifth grade) via another consolidation, and in 2012 the school added a sixth grade with the closing of Holy Family Middle School.

The school has been located for all of its nearly 61 years at 811 Westlake St., near the busy intersection of Route 17 and Route 86 in Chemung County. Offering prekindergarten through sixth grade, its principal is Jean Yorio.

Although coeducational Catholic high-school education had existed in Elmira since 1930, the 1955 opening of Notre Dame marked the city’s first Catholic high-school building. It opened at its present site at 1400 Maple Ave., on the city’s south side. The school was founded by the Sisters of Mercy and has been staffed by many members of that order over the years. Notre Dame’s principal is Deborah Franklin.

Serving grades nine through 12 for all of its history, Elmira Notre Dame expanded its offerings in 2012 to include seventh- and eighth-graders. Independently operated, it is the only Catholic high school in the Rochester Diocese outside Monroe County. Its facilities have been bolstered in recent years by two major capital campaigns that produced a new science wing in 2005 and new auditorium in 2017.