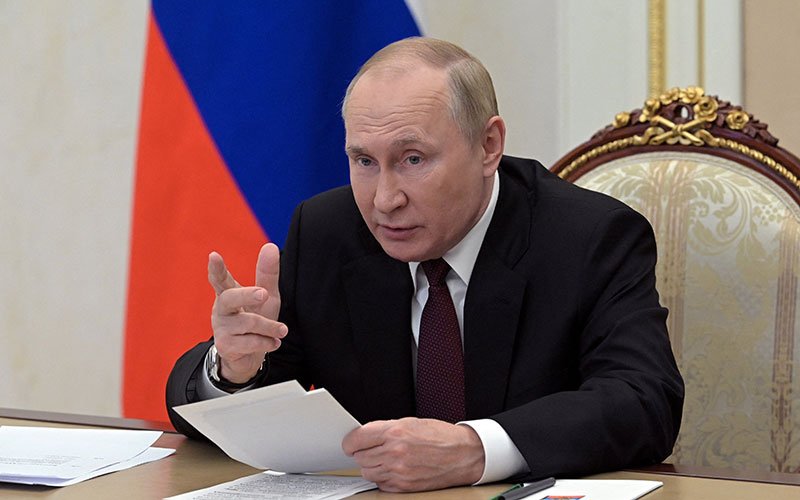 Russian President Vladimir Putin addresses heads of security and intelligence agencies of the Commonwealth of Independent States via a video link in Moscow Oct. 26, 2022. (CNS photo by Sputnik, Alexei Babushkin, Kremlin via Reuters)

In an Oct. 26 letter to Biden sent by the Maryknoll Office for Global Concerns, the organizations condemned Russian President Vladimir Putin’s threat to use nuclear weapons in Ukraine and urged Biden not to respond in kind if such weapons are used.

“We urge you to show great restraint, and to do everything in your power to de-escalate the conflict, to seek dialogue with Russia, and take immediate, concrete steps toward nuclear disarmament,” the letter said.

Susan Gunn, director of the Maryknoll Office for Global Concerns, said in a statement that “to work for peace in times of conflict requires imagination and faith.”

“We hope President Biden is inspired by his Catholic faith, to see beyond the boundaries of race, religion and nation to keep pursuing diplomacy and dialogue, and not get caught in an escalation of arms but rather keep turning attention to the care for our common humanity that makes us all brothers and sisters on this one Earth,” she said.

The letter expressed concern that Putin’s threat to use nuclear weapons is the most significant since the Cuban missile crisis in 1962.

It also cites statements from Pope Francis on the threat posed by nuclear weapons. It particularly pointed to the pope’s Oct. 2 comments during the Angelus at the Vatican where he expressed concern about the “risk of nuclear escalation” that would give “rise to fears of uncontrollable and catastrophic consequences worldwide.”

The correspondence also explains that the nuclear threat is “the single greater moral issue” facing Biden because any use of nuclear weapons “would hasten climate disaster.”

The organizations said they would welcome a meeting with Biden to discuss their concerns and the necessity to pursue diplomacy to end the war in Ukraine.