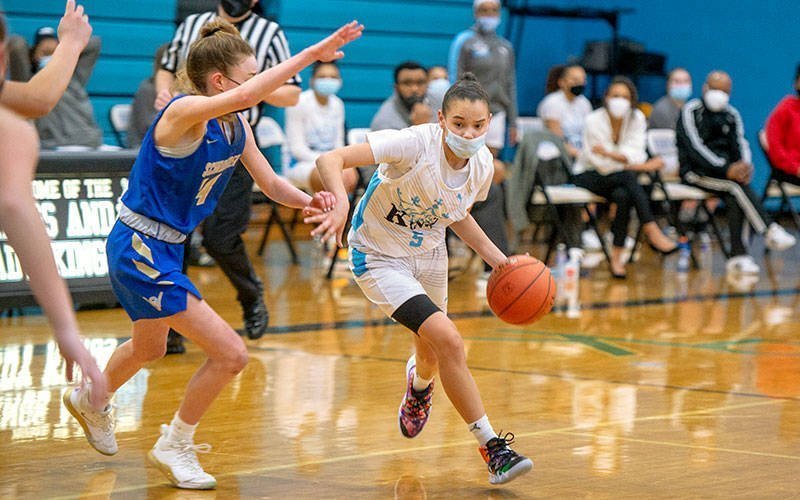 Bishop Kearney’s Amaia Jackson carries the ball in the first half of the March 10 girls basketball sectional semifinals game against Webster-Schroeder. (Courier photo by Jeff Witherow)

Despite schedule adjustments stemming from the coronavirus pandemic, Catholic high schools in the diocese still managed to find success during the recently concluded winter sports season.

No state-championship tournaments took place this winter due to safety concerns, and some high-school sports began their seasons late and had to complete sectional playoffs within an abbreviated time period and with limited tournament fields. In the case of Section 4, where Elmira Notre Dame is located, all sectionals were cancelled completely.

Even so, many noteworthy accomplishments emerged from the season. Among them are the following:

• Bishop Kearney girls’ basketball was stopped just short of a Section 5 Class AA title. The Kings, seeded No. 1 in Section 5 Class AA, won 63-55 over No. 8 Victor in quarterfinal action March 8 and went on to a 60-55 semifinal win over No. 4 Webster Schroeder March 10. BK was halted in the March 12 championship contest by No. 6 Penfield, 54-51, finishing its season with a 9-1 record.

• Elmira Notre Dame girls’ basketball ended up with an 8-1 record despite not having sectionals. With a 73-28 win over Spencer-Van Etten on March 4, the Crusaders closed out their year on an eight-game winning streak.

• In boys’ bowling, Re’Shaun Beason of Bishop Kearney/Rochester Prep had the high series of 1,426 at the Section 5 Class C tournament Feb. 26. He also posted the second-high game of 266.