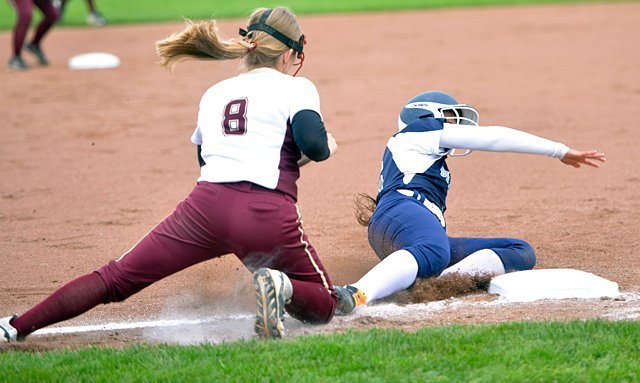 During the May 27 Section 5 Class A1 softball final, Mercy’s Olivia Ortega slides safely into third under the tag of Pittsford Mendon’s Hannah Trumble.

McQuaid notched several come-from-behind wins — including one in the Section 5 title game — to reach the state Class AA baseball semifinals. Williams, meanwhile, recorded four top-three finishes at the state track meet, winning one event, after leading his Knights to the Section 5 Class AA title earlier in the spring.

The Knights, seeded No. 5 in Section 5 Class AA, turned in four straight comeback victories in the post-season.

After a 13-3 win over No. 12 Gates Chili May 19 in sectional first-round action, they won 3-2 over No. 4 Webster Thomas May 22 in quarterfinal play by scoring in the sixth and seventh innings to overcome a 2-1 deficit. Next was a 12-8 decision over No. 8 Victor May 24 in the semifinals as a seven-run fourth inning erased an 8-3 hole.

In the final May 27 against No. 6 Rush-Henrietta, the Knights trailed 2-0 entering the seventh and were one strike from elimination, but won 3-2 in eight innings to claim the sectional crown. Then in state Class AA quarterfinal play June 3, McQuaid defeated Clarence of Section 6, 5-4 in eight innings, after trailing 4-2 entering the fifth.

McQuaid’s season ended June 9 with a 7-1 loss in the state semifinals to Massapequa of Section 8. Its final record was 17-6.

Those victories came on the heels of McQuaid’s first-place team finish at the Section 5 Class AA meet May 27. Williams was a triple winner, taking the 100, 200 and 400; and Rooney prevailed in the 400 hurdles.

The top-seeded Crusaders cruised to the Section 4 title, winning 11-1 over No. 2 Union Springs in the Class C final May 27 as Jordyn Fargo hit a first-inning grand slam home run and Izzy Milazzo tossed a four-hitter.

Notre Dame had reached the final by winning 7-1 over No. 8 Sidney in quarterfinal play May 23 and 9-0 over No. 4 Bainbridge-Guilford May 26 in the semifinals behind a no-hitter from Milazzo.

The team’s undefeated season was thwarted by Sandy Creek of Section 3, 6-3 in 10 innings, in state quarterfinal action June 2. Notre Dame had a final record of 21-1 and was the defending state Class C champion.

The Monarchs, seeded No. 6 in Section 5 Class A1, won the sectional title over No. 5 Pittsford Mendon, 19-9, May 27 as Gabrielle Schlehr smacked a three-run homer.
Earlier in sectionals, Mercy won 13-0 over No. 11 Eastridge May 19 in first-round play, 8-5 in eight innings over No. 3 Irondequoit May 23 in the quarterfinals, and 8-4 over No. 10 Spencerport May 26 in the semifinals.

Following its sectional title triumph over Mendon, Mercy won 15-2 over Pittsford Sutherland in a state qualifier May 30. The Monarchs (14-9) then fell to Williamsville East of Section 6, 8-3, in the state Class A quarterfinals June 2.

‚Ä¢ McQuaid’s Craig Eichas placed sixth at the Section 5 boys’ golf tournament May 20 and 22. By finishing in the top nine with his two-round total of 156, Eichas qualified for the state tourney June 4-5 where he tied for 59th place among 99 golfers.