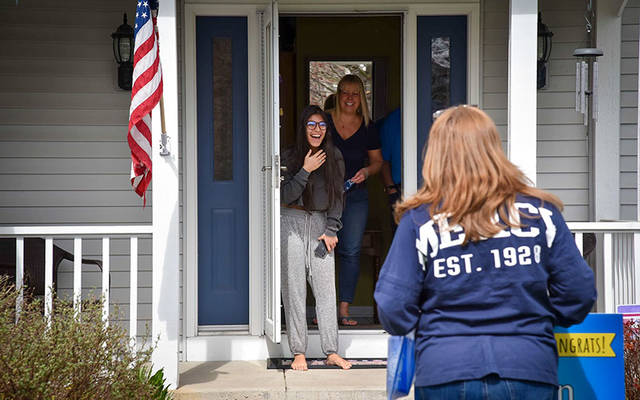 Lisa Costello, counseling coordinator at Our Lady of Mercy School for Young Women, surprises senior Keelan Crowley with a Class of 2020 sign at her home May 1. (Photo courtesy of David Carro)

When Gov. Andrew Cuomo announced that schools in New York state would continue with online learning for the remainder of the 2019-20 academic year, the Catholic high schools in the Diocese of Rochester started planning alternative ways to recognize the Class of 2020.

The seniors at Aquinas Institute in Rochester were scheduled to receive their diplomas as a class on June 6. Now each Aquinas senior and his or her immediate family will be given a designated time that day to arrive at the school for a personal ceremony, as outlined in a letter to seniors and their parents from Aquinas President Anthony Cook and Principal Ted Mancini. The letter also stated that the school’s senior ball has been tentatively rescheduled for Aug. 7, and a traditional senior Mass and picnic is being planned for Aug. 8.

“We remain hopeful that our seniors will be able to gather together and celebrate as an entire class before they begin their new journeys in the fall,” the letter stated.

In early April, administrators hand delivered “Proud Home of an Aquinas Senior” yard signs to each of the 127 seniors, and senior class meetings were conducted using the video-conferencing platform Zoom.

“Our seniors have been on top of our minds since distance learning began, and are even more so now that we know we will not return to campus this school year,” Meredith Kallfelz, communications and enrollment coordinator at Aquinas, said in an email to the Catholic Courier.

Kallfelz said Aquinas also has created a special Instagram account to highlight their graduates. A faculty member also is putting together a senior testimony video.

William Geraci, principal of Bishop Kearney High School in Irondequoit, has been meeting with the senior class advisers, students and parents to come up with ways to celebrate the school’s 52 seniors.

“It has been challenging to do things for seniors in real-time,” Geraci told the Courier.

The Class of 2020 was scheduled to graduate during a June 6 ceremony at Roberts Wesleyan College. Instead, a senior weekend, which includes a senior ball, picnic, yearbook distribution and graduation, is being planned for July 10-12 at Roberts Wesleyan, Geraci said. He noted that the school also is considering alternative plans should they not be able to gather in July.

The seniors also have stayed connected through social media, Zoom meetings and Google Hangouts. Members of the senior class also received “Proud Home of a Bishop Kearney Senior” lawn signs to display in their front yards.

The Class of 2020 at McQuaid Jesuit High School in Brighton was scheduled to graduate June 7 at the Eastman Theater. Instead, the senior class will be provided with a bunch of surprises on that day, according to Sean Mullen, the school’s director of communications.

“And we don’t want to ruin those surprises,” Mullen told the Courier in an email.

In addition to the surprises, a prayer service will be conducted via Zoom on the evening of June 7. Mullen said that McQuaid also has secured the Eastman Theatre for Aug. 9 for its rescheduled graduation.

The faculty and staff also presented the seniors with “McQuaid Graduate 2020” lawn signs.

In honor of the Class of 2020, Elmira’s Notre Dame High School has joined schools throughout the country by turning on their stadium lights every Friday evening from 8 to 9 p.m. as part of the #BetheLight campaign. Banners with photos of each of the school’s 46 seniors, created by the local organization Multi Media services, also align the fence of the football stadium. On May 22, the seniors were invited back to campus in groups of 10 to receive their caps and gowns, and see their friends and check out their banners.

Notre Dame seniors also were presented with “Home of a Notre Dame High School Senior” lawn signs., and the school also is recognizing its 2020 graduates by highlighting a different senior each day on Facebook.

“What they have been tasked with is to come up with some fun ways of celebrating the seniors, in light of the fact that they are not seeing one another face to face and that they are missing out on so many of the wonderful celebrations that are so commonly associated with the spring of senior year,” Kilbridge explained.

Kilbridge said while some of the things that the team has organized are still a surprise to Mercy’s 152 seniors, some of the things team members already have done included putting together a video of the seniors and visiting them at their homes and putting up lawn signs with their names and Our Lady of Mercy 2020 on them.