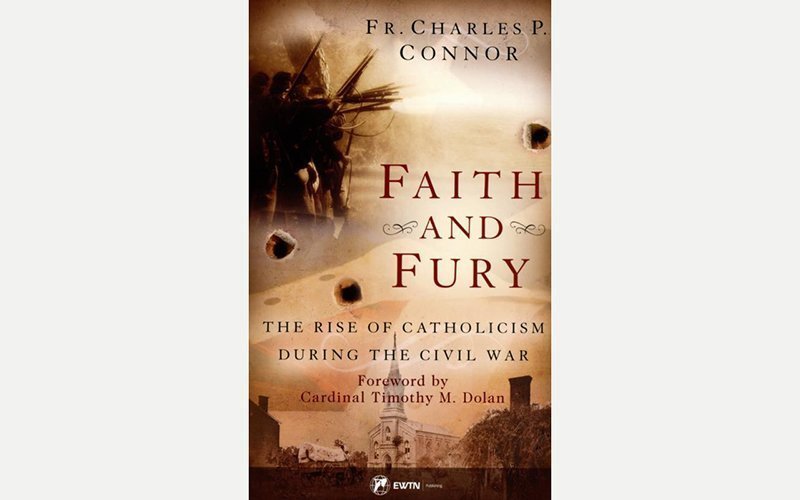 This is the cover of the book "Faith and Fury: The Rise of Catholicism During the Civil War" by Father Charles P. Connor. The book is reviewed by Nancy L. Roberts. (Photo by CNS)

“Faith and Fury” aptly describes the atmosphere that 19th-century American Catholics must have experienced. Then, waves of Irish and German Catholic immigrants invigorated the church and also encountered nativist rage and violence from the Protestant majority.

Debates about slavery’s morality swirled everywhere, not only in the halls of government but also in the churches. There was no respite from sharply divisive conflicts and moral soul-searching. When war finally came in 1861, Catholics on both sides, convinced of their righteousness, implored God to grant them victory.

These are just a few of the fascinating strands that this readable introduction to 19th-century U.S. Catholic history weaves together. The author, Father Charles P. Connor, is a professor of theology and church history at Mount St. Mary’s Seminary, Emmitsburg, Maryland, who has written many well-received books about U.S. Catholic history. He adroitly balances storytelling and scholarship in his account of this most turbulent period.

Then, the United States was a Protestant nation and many considered Catholics to be inferior. While some, such as New England Unitarians, had a more favorable view of Catholics, they were not the norm. As Father Connor explains, “Catholics belonged to a church intent on destroying individual freedom; they were thought to be anti-intellectual, filled with superstitious beliefs, and, on the whole, an alien and foreign presence.”

Anti-Catholicism reached a fever pitch in 1834, when an angry mob burned down Mount Benedict Catholic girls’ school in Charlestown, Massachusetts (near Boston). Anti-Catholicism, directed at the growing number of Catholic immigrants, eventually led to political activism, as nativists sought to limit immigration and naturalization of foreigners (Catholics).

As the number of Catholic immigrants soared, Father Connor writes, “they were seen only as the strange Catholic foreigners whose ecclesial body was set upon depriving America of her rights and liberties, and whose pope was all too ready to assume command either from Rome or perhaps from America’s own shores.”

On the eve of the Civil War, despite such opposition, Catholics had succeeded in establishing a strong foothold in the United States, “developing institutions and producing notable bishops, priests, religious and laity.”

In the sectional differences that seethed over the issue of slavery, Catholics figured prominently on both sides.

It was a practicing Catholic, Chief Justice Roger Taney of Maryland, who handed down the decision in the 1857 Dred Scott case, one that was cheered by Southern slaveholders. Yet as early as 1815, St. Elizabeth Seton, founder of the Sisters of Charity, noted in her diary her efforts to give first Communion instruction to poor black children in Emmitsburg, Maryland.

And Father Stephen Badin, the “apostle of Kentucky” and the first priest ordained in the United States, was ministering to slaves on the frontier as early as 1805. Father Connor cites a letter the evangelist wrote in which he lamented that slaves were treated “almost like animals,” and fed and clothed “meagerly.”

Yet popes had long and vigorously decried the institution of slavery, as did Pope Eugene IV in 1435 in a papal bull, “Sicut Dudum.” But as Father Connor shows, the American bishops themselves succumbed to social mores and indeed, many themselves owned slaves, as did prominent lay Catholics. Still, both clergy and laypeople also made efforts to manumit their slaves. In his will, Archbishop John Carroll of Baltimore directed the manumission of his “black servant Charles” and bequeathed him the sum of $50.

When the shooting war began, Catholics took an active role on both sides, sometimes in direct conflict with their co-religionists. One of the more dramatic examples given is of the “Montgomery Guards” of the First Virginia Infantry. Before they went to battle, they had the pikes they carried blessed by Bishop John McGill at St. Peter’s Cathedral in Richmond. They went on to Bull Run to battle New York’s Irish Catholic 69th Regiment.

Dedicated chaplains both North and South ministered to the fighting men. In one of the book’s most compelling chapters, Father Connor recounts the stories of several priests who volunteered to serve the soldiers’ spiritual needs.

One was the “priest poet of the South,” Father Abram J. Ryan. Born in Hagerstown, Maryland, in 1838 to Irish immigrant parents, he tended the sick and dying in New Orleans, Knoxville, Tennessee, and Augusta, Georgia, eventually settling in Mobile, Alabama. He became well known for his poems, especially “The Conquered Banner.”

No less heroic were religious sisters, who could often be found nursing the wounded and dying right on the battlefields. The communities of the Sisters of Charity, the Sisters of Mercy, the Sisters of St. Joseph and the Sisters of the Holy Cross all took a major role in addressing the human cost of war. Not only did they alleviate suffering, they also demonstrated the value of the Catholic faith to those who had lapsed, sometimes inspired new converts, and broke down entrenched hostility that for some soldiers had been lifelong.

For those unacquainted with Catholic history in the Civil War era, “Faith and Fury” is an excellent starting point. Well researched and engagingly written, it shows both the strengths and weaknesses of Catholicism in this difficult phase of American history.

Roberts directs the journalism program at the University at Albany, SUNY, and has written/co-edited two books about Dorothy Day and the Catholic Worker.