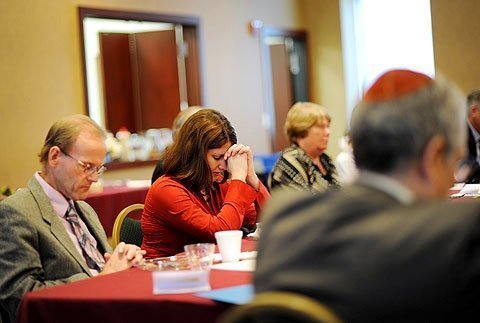 Meghan Robinson (center) and Father George Heyman (left) bow their heads in prayer during a Sept. 21 luncheon to celebrate the 15th anniversary of the signing of the Rochester Agreement.

GATES — Make no mistake about the reunion-like atmosphere at the luncheon marking the 15th anniversary of a groundbreaking interfaith agreement: There is still work to be done, even among longtime friends, several speakers noted.

The anniversary of the Rochester Agreement — in which the Rochester Board of Rabbis, the Jewish Community Federation of Greater Rochester and the Roman Catholic Diocese of Rochester committed to working together on issues of mutual concern — prompted Rabbi Alan Katz to suggest a new assessment of progress in the community, including how the Catholic and Jewish faiths are being taught in each others’ schools.

"Are traditional stereotypes still in the curriculum or are more accurate modern realities presented from a basis of shared learning and knowledge?" Rabbi Katz asked at the Sept. 21 gathering. "Perhaps this group needs to reconvene at least to ask the questions of the educators."

Others wondered how young people would be able to experience firsthand accounts of the Holocaust, now that many survivors are deceased. Yet several speakers also celebrated the educational experiences brought about by the agreement.

"Were it not for this historic document, I’m not sure that we would have the cross communication and sharing that we have today, and that so many of us have come to value," said Roberta "Bobbie" Borg, who signed the agreement in 1996 as the president of the Rochester Jewish Community Federation. "But there is room for growth on all fronts, and I look forward to future programming that brings our two religious communities to even greater understanding of each other."

The Rochester Agreement was made possible by two other documents: the 1965 Declaration on the Relationship of the Church to Non-Christian Religions Nostra Aetate, which rejected anti-Semitism and religious discrimination; and the 1993 diplomatic Fundamental Accord between the Vatican and state of Israel, which established diplomatic relations between the two states, sweeping away a major obstacle to dialogue.

Soon after, some area leaders suggested that the local faith communities could adapt the accord to Rochester’s interfaith dialogue; the resulting agreement was signed May 8, 1996.

It committed Catholic and Jewish leaders to upholding freedom of religion and conscience; combating anti-Semitism, racism, anti-Catholicism, and religious intolerance; promoting mutual understanding and respect for human life and dignity; promoting a deeper knowledge of and respect for each other’s history, traditions and sensitivities; creating a society free from violence and prejudice; and promoting combined work by Catholic and Jewish agencies and groups.

The need for a new generation to engage in the work of interfaith dialogue was highlighted as diocesan officials introduced Meghan Robinson, who was recently appointed diocesan liaison for ecumenical/interfaith relations. Bishop Matthew H. Clark also noted the absence at the luncheon of Rabbi Judea Miller and Father Joseph Brennan, both now deceased, who were pioneers in local interfaith cooperation.

"The work we have achieved and into which we continually commit ourselves was made possible by those who have gone before us," Bishop Clark said.

* Interfaith pilgrimages by Catholics and Jews to Israel in 1998 and to Rome in 2005.

* Study groups of Catholic and Jewish clergy and educators, including an annual study of a Hebrew text by the Commission on Christian-Jewish Relations. This year the commission will study the Gospel of Matthew in the context of Jewish understanding.

* An international conference on the Holocaust and the churches, which is planned for this spring at Monroe Community College.

* The signing in other communities of agreements modeled on the Rochester Agreement, which is believed to be the first Jewish-Catholic agreement of its kind in the nation.

* Virtual and in-person exchange programs at area schools, such as the participation by several Catholic schools in the International Book-Sharing Project, in which students from a U.S. Catholic school discuss a book with students from a Jewish school in Israel. This month, a delegation of Israeli educators also will visit Rochester, where they will tour a Catholic church and learn about Christianity.

* The annual Brennan Memorial Interfaith Lecture, which began in 2009.

* Establishment of the Brennan-Goldman Institute for Jewish-Catholic Understanding and Dialogue at St. Bernard’s School of Theology and Ministry in Pittsford. Named for Father Brennan and Isobel Goldman, the former community-relations director for the Jewish Community Federation of Greater Rochester, the institute has funded a variety of programs to promote greater understanding.

In 2009, the institute hosted the Bettina and Erwin Pearl Bearing Witness Institute, presented by the Anti-Defamation League, through which Catholic educators, parish faith-formation staff and youth ministers studied the Holocaust and its implications for the future. This fall the Brennan-Goldman Institute is presenting a three-part series on "The Way We Were: Christians and Jews in the Early Years," with talks scheduled for 7 p.m. Oct. 23 and Nov. 13 at St. Mary Church, 15 St. Mary’s Place, Rochester.