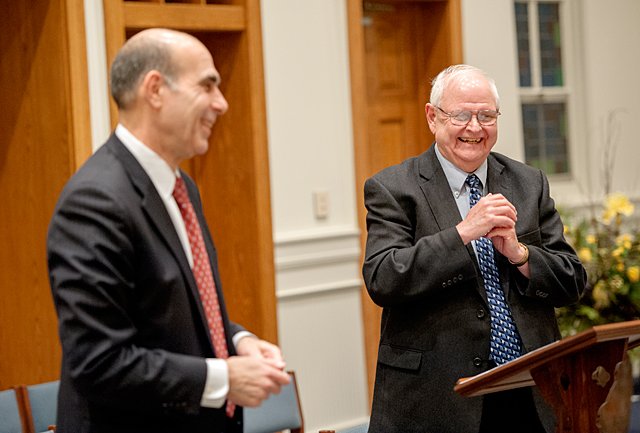 MENDON — Behold How Good It Is.

That sentence is the title of a book released last fall by local Catholic and scholar Dr. Joseph Kelly, but it also captures the essence of a presentation Kelly and Larry Fine, executive director of the Jewish Federation of Greater Rochester, recently made on Catholic-Jewish relations in the Greater Rochester area. More than a dozen people gathered at St. Catherine of Siena Parish in Mendon on Jan. 19 to learn more about the history and fruits of the local relationships between Catholics and Jews.

The evening presentation was part of a discussion series the parish hosts each year, according to parishioner Jack Clarcq, who coordinates the series with Sister of St. Joseph Ruth Maier, pastoral associate at St. Catherine. The next discussion, which will take place in March, will focus on local Catholic-Muslim relations and will be led by Bernard Grizard, director of the Diocese of Rochester’s Office of Parish and Clergy Services, and Dr. Muhammad Shafiq, executive director of the Hickey Center for Interfaith Studies and Dialogue at Nazareth College in Pittsford.

The time felt right for the discussion series to focus on local interfaith efforts, Clarcq told the Catholic Courier.

"We just felt at a time when everything is fractured in this country and we have animosity all over the place, it’s time to talk. If we don’t start doing all this stuff locally, we’re not going to make a difference," Clarcq said.

The Rochester region is unique because a number of people have worked hard to make a difference via interfaith efforts, Kelly explained during the Jan. 19 discussion. Official relations between local Catholics and Jews currently are very good, but that wasn’t always the case, both in Rochester and beyond, he said. Fine said that when he was growing up in Chicago, the temple he attended was right across the street from a Catholic church, but relations between the two communities were not great.

"At least twice a year the boys from Our Lady Gate of Heaven would come across the street and beat us up. Why? Because they’d been taught that we killed Christ," Fine recalled. "Some of the teachings of the Catholic Church were really painful before Nostra Aetate."

Nostra Aetate is a document that came out of Vatican II in October 1965 and began to change the way Catholics and Jews viewed each other, said Kelly, a retired professor of religious studies at Nazareth College and professor of Hebrew studies at St. Bernard’s School of Theology and Ministry. This document condemned the teaching that Jews were responsible for killing Christ, decried anti-Semitism and promoted the importance of interfaith dialogue.

"It is remarkable that it was produced and remarkable that it has garnered so much fruit in the past 50 years," Kelly said. "The relationship between Jews and Catholics at the official level has been wonderful for the last 50 years, but the challenge is to get it down to the people in the pews. We still have a lot of people in the pews, both Catholics and Jews, who don’t realize it was published and don’t realize what a remarkable document it is."

Nostra Aetate set the stage for the 1993 Basic Accord between the Vatican and Israel, which in turn led to increased interfaith dialogue in the Rochester region, Kelly said. This dialogue bore fruit in the form of The Rochester Agreement, which was signed in 1996 by leaders of the Diocese of Rochester, the Rochester Board of Rabbis and the Jewish Community Federation of Greater Rochester. Believed to be the first of its kind in the United States, this document called for its signatories to work together to educate the community about each other’s faith and to publicly denounce acts of intolerance.

In the wake of this historic agreement, local Catholics and Jews have taken pilgrimages together to Israel and Rome, worked together on a number of educational efforts and developed solid friendships based on mutual respect. The biggest challenge interfaith activists now face is bringing awareness of the agreement to the people in the pews, Kelly said.

"We want to continue this legacy," he said. "We want to have a future even brighter than the past, even though the past was quite bright."

Tags: Antisemitism, Monroe County East
Copyright © 2023 Rochester Catholic Press Association, Inc. All rights reserved. Linking is encouraged, but republishing or redistributing, including by framing or similar means, without the publisher's prior written permission is prohibited.