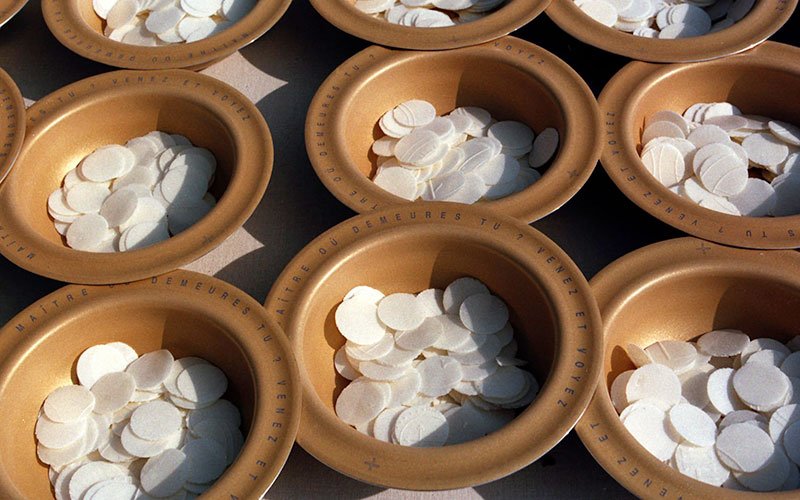 Pelosi not ‘to be admitted’ to Communion over her abortion stand

In a June 6 open letter, the Catholic bishops of Colorado asked those Catholic legislators “who live or worship in the state” and voted for Colorado’s Reproductive Health Equity Act “to voluntarily refrain from receiving holy Communion.”

They urged this action “until public repentance takes place and sacramental absolution is received in confession.”

“The burden from their decision does not rest upon the shoulders of priests, deacons or lay extraordinary ministers of the Eucharist,” they wrote. “It rests upon the consciences and souls of those politicians who have chosen to support this evil and unjust law.”

The Reproductive Health Equity Act is considered one of the nation’s most permissive abortion measures. Gov. Jared Polis quickly signed it into law April 4 just after it finally passed the state House and Senate.

It permits on-demand abortion for a full 40 weeks of a pregnancy; allows abortion based on discrimination of sex, race or children with disabilities such as Down syndrome; and removes the requirement that parents of minors be notified if their minor receives an abortion.

It also enshrines in law that “a fertilized egg, embryo, or fetus does not have independent or derivative rights” under state laws and prohibits any regulation of abortion based on concerns regarding the health of the woman or baby.

“The recently concluded 2022 legislative session was difficult for many Coloradans who watched in dismay as their state legislators rushed one of the most extreme abortion bills in the country through the chambers of the Capitol and to Governor Polis’ desk for his signature,” the prelates wrote.

As the bill moved ahead in the Legislature, “there was a strong outcry against it,” they said. “Thousands of people wrote to their lawmakers. Over 350 people testified against RHEA (Reproductive Health Equity Act) in the House and more than 215 testified against it in the Senate into the early hours of the morning.”

The four prelates were among hundreds of people who offered testimony in opposition to the bill in hourslong hearings on it.

Some lawmakers who supported the bill said it “is designed to make our state an abortion destination and ‘safe haven,'” they said. “They expect pregnant mothers to come flooding in from surrounding states for abortions if Roe v. Wade is overturned. It causes us profound sadness and distress to know that some Catholic legislators voted for this.”

“We have a strong desire to discuss the spiritual and cultural impact of laws like RHEA with politicians of both parties who say they are Catholic and who represent people in our state,” the bishops continued. “As their shepherds we want to ensure that they understand the church’s teaching on receiving holy Communion and the proper spiritual disposition for doing so.

“Efforts have already been made to speak with several of these lawmakers, but unfortunately, very few of them have accepted the invitation to meet.”

By their public votes, the bishops wrote, it was clear several Catholic lawmakers believe “pre-born babies are worth less than those who have had the gift of being born, according to this morally bankrupt logic.”

The bishops thanked Sens. Barbara Kirkmeyer, Kevin Priola and Jim Smallwood and Rep. Andres Pico, who are Catholic and voted “to protect the unborn and against allowing our state to strip them of their God-given right to life.”

“Voting for RHEA was participating in a gravely sinful action because it facilitates the killing of innocent unborn babies, and those Catholic politicians who have done so have very likely placed themselves outside of the communion of the church,” they wrote.

The prelates quoted from “The Mystery of the Eucharist in the Life of the Church,” a 26-page statement approved by the body of bishops last November.

It did not call for barring Catholic politicians who support abortion from Communion, but it was addressed to all Catholics in the United States and explained “the centrality of the Eucharist in the life of the church.”

“To receive the body and blood of Christ while in a state of mortal sin represents a contradiction,” Colorado’s bishops wrote, quoting the document. “The person who, by his or her own action, has broken communion with Christ and his church but receives the Blessed Sacrament, acts incoherently, both claiming and rejecting communion at the same time.”

“Moreover,” the bishops said, “receiving the Eucharist in a state of mortal sin is sacrilegious because it is ‘a failure to show the reverence due to the sacred body and blood of Christ.'”

“Finally,” they said, “when other Catholics see public figures receiving Jesus in such a spiritual state their resolve to be faithful to the Gospel can be weakened. A Catholic politician or public figure leading or encouraging others to do evil is a failure to respect the souls of others and is what the church defines as ‘scandal,'” as the document stated.

“We pray that this letter and our request to refrain from receiving Jesus in the Eucharist spurs sincere reflection and conversion in the hearts of those who have participated in allowing this grave act of injustice to become law,” they said.

This request was not one they made “lightly,” they said, but was made out of their “duty to safeguard the faith and care for the souls of all the faithful — including these politicians.”

“We are always willing to engage in conversation with any Catholic politician to whom this applies,” they concluded, “and we want you to know that we regularly pray for all who hold public office.”