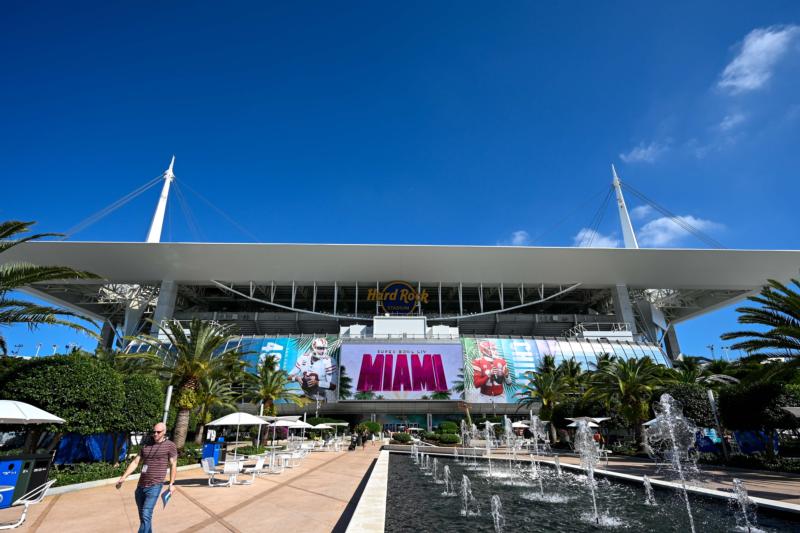 A man walks alongside a fountain outside Hard Rock Stadium in Miami Gardens Jan 28, 2020, where the San Francisco 49ers and Kansas City Chiefs will compete in Super Bowl LIV . CNS photo by Douglas DeFelice-USA TODAY Sports via Reuters)

WASHINGTON (CNS) — The Super Bowl isn’t just about football. For many, it’s about the wings, chili, sliders, chips and dips consumed during the game.

And for Catholic leaders of the cities from the two competing teams in this year’s matchup — San Francisco and Kansas City, Missouri — it’s about food bets on the game’s outcome.

The bishops also are praying for safe travel, good sportsmanship and play without injury for all involved, the Missouri diocesan website pointed out.

This is not the first bet this football season for Archbishop Cordileone, who was coaxed into a friendly wager during a Jan. 17 interview on Relevant Radio’s “Drew Mariani Show” just two days before the NFC Championship game between the Green Bay Packers and the 49ers, which secured San Francisco’s spot in this year’s Super Bowl.

On the segment, the archbishop and Green Bay Bishop David L. Ricken said if their teams lost, they would contribute to the other’s Catholic Charities agencies and also send along local food. Archbishop Cordileone suggested that Bishop Ricken could send him some cheese, while he offered to send Dungeness Crabs and sourdough bread.

Archbishop Cordileone said he came to San Francisco just a year before the city’s team was in the Super Bowl in February 2013. The 49ers lost to the Baltimore Ravens, 34-31. When asked if the 49ers’ wins this season had energized the city, the archbishop said: “Sports has a way to do that, to unify people.”

One possible edge for the Chiefs is that Pope Francis was given a jersey of the team’s quarterback, Patrick Mahomes, by Bishop Johnston when he was at the Vatican for his “ad limina” visit with the pope in mid-January with bishops from Iowa, Kansas, Missouri and Nebraska.

Archbishop Cordileone, at the Vatican during the last week of January, with other bishops from California, Nevada and Hawaii, did not present the pope with a reciprocal 49ers jersey of quarterback Jimmy Garoppolo, but instead gave the pontiff a hand-bound copy of the score for the Mass of the Americas, a Latin Mass the archbishop celebrated Nov. 19 at the Basilica of the Shrine of the Immaculate Conception in Washington.

The previous time there was a Super Bowl wager between Catholic leaders was during the February 2018 matchup between the Philadelphia Eagles and the New England Patriots when Archbishop Charles J. Chaput of Philadelphia and Cardinal Sean P. O’Malley of Boston, waged $100 donations to aid the poor in their archdioceses. They also threw in both Philadelphia cheesesteaks and Boston lobsters. The Eagles won that Super Bowl, 41-33.

This year’s Super Bowl is expected to be a close game, with the 49ers known for their defense and the Chiefs, who haven’t been to a Super Bowl in 50 years, known for their offense. The Chiefs are the favorites, but just barely, so the two church leaders will have to pay close attention.

Viewers will have to pay close attention too because both teams have the same color scheme — red and gold. But for this matchup, the Chiefs will wear red jerseys with white pants, while the 49ers will wear their away uniform of white jerseys with gold pants.