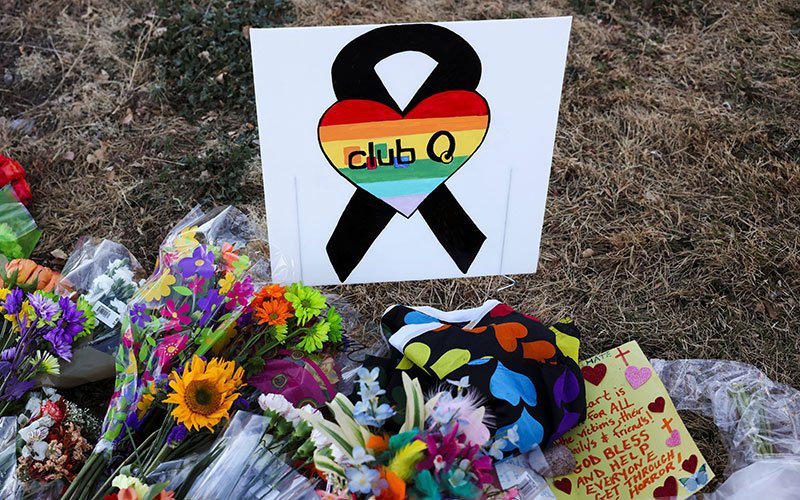 A makeshift memorial in Colorado Springs, Colo., is seen Nov. 20, 2022, after a mass shooting at Club Q, a LGBTQ nightclub. At least five people were killed and 25 others injured by a 22-year-old gunman who entered the nightclub just before midnight Nov. 19 and immediately opened fire. The shooting lasted just minutes before patrons confronted and stopped the suspected shooter, identified as 22-year-old Anderson Lee Aldrich. (CNS photo by Kevin Mohatt, Reuters)

WASHINGTON (CNS) — Catholic leaders have condemned the Nov. 19 attack on an LGBTQ nightclub in Colorado Springs, Colorado, that killed at least five people and injured at least 25.

Seven of those wounded were in critical condition.

The church leaders — the archbishop of Denver, leaders of religious orders and congregations, and a Catholic outreach group to members of the LGBTQ community — also prayed for those impacted by the attack and urged for an end to hate crimes and use of language that condemns those in the LGBTQ community.

The suspected gunman, 22-year-old Anderson Lee Aldrich, faced murder and hate crime charges Nov. 21, a law enforcement official told The Associated Press, adding that the suspect used an AR-15-style semiautomatic weapon in the attack at Club Q before he was subdued by people at the club.

On its Facebook page, the club thanked the “quick reactions of heroic customers that subdued the gunman and ended this hate attack” within minutes of the alleged gunman opening fire after entering the club shortly before midnight Nov. 19.

It also noted that a drop-in center was set up at a nearby hotel with counseling services available all week. Outside the club, a makeshift memorial was filled with flowers and stuffed animals.

Denver Archbishop Samuel J. Aquila said he was “saddened by this tragic and senseless act.”

In a Nov. 20 statement, he said that “while the motives remain unclear, what is clear is that evil incidents like this have become far too common in our society. The random acts of killing innocent human beings must be condemned by a civil society.”

Similarly, Bishop James R. Golka of Colorado Springs, issued a Nov. 21 statement calling the nightclub shooting “especially troubling” since the shooter “appeared to target members of the LGBTQ community.” He said anytime “specific members of the population are targeted for violence, we should all be concerned.”

The bishop also spoke against gun violence and mentioned the anxiety and pressure many are feeling since the pandemic and urged anyone struggling to contact a priest or minister from their church or Catholic Charities of Central Colorado.

The U.S. Conference of Catholic Bishops retweeted the bishop’s message and said they joined him and “the community of Colorado Springs in lamenting this violent act and praying for all those impacted.”

Mark Joseph Williams, a clergy abuse survivor, responded to the Colorado bishop’s tweet by pointing out that when he addressed the U.S. bishops Nov. 15 during their fall general assembly in Baltimore, he had asked them to walk with all the abused.

He said he now asks Bishop Golka “and his brother prelates to walk w/ our LGBTQ brothers and sisters. It is our faith. God loves all.”

Outreach, a new initiative of Jesuit-run America Media that provides resources for LGBTQ Catholics, similarly issued a statement on its website Nov. 20 praying for those who died, those who were wounded and for the LGBTQ community in Colorado Springs.

It said the “motive for this terrible attack on LGBTQ people remains unclear” but also pointed out that it took place “the day before Transgender Day of Remembrance, a day when we commemorate transgender people whose lives were lost in acts of violence.”

The night of the attack, Club Q was planning to host a drag show to mark the day of remembrance.

The Outreach statement stressed that while a motive remained unclear, what is clear, it said, is “the effect that stigmatizing language has on the safety and well-being of LGBTQ people.”

“Language that seeks to reject, condemn, isolate, blame or target LGBTQ people should be rejected, especially by religious leaders,” it said, adding that such language “leads only to further harassment, beatings and violence.”

“Churches and other religious institutions are called to stand on the side of all who are in any way persecuted, including LGBTQ people,” the Nov. 20 statement said.

Violence toward LGBTQ community must stop

Paulist Father René Constanza, president of the Paulist Fathers, also condemned not only the attack but harmful rhetoric toward those in the LGBTQ community.

“Violence targeting our LGBTQ sisters and brothers must stop,” he said.

In a Nov. 21 statement, he said “rhetoric that dehumanizes and disrespects the inherent dignity of those who identify as LGBTQ is unacceptable, including that espoused by members of our own Catholic Church and other faith communities.”

He also said gun violence “needs to be more seriously dealt with by our civil leaders.”

The priest said it was time for society “to address the anger, contempt, and indifference that fuel violence against all people because of their sexual orientation, skin color, race or religion.”

“No place for hate crimes in our nation”

The general council of the Adrian Dominican Sisters based in Adrian, Michigan, similarly responded to the shooting saying their “hearts ache” for those who were killed and those injured and offered “deep condolences to family and friends who are mourning the loss of their loved ones.”

“There is no place for hate crimes in our nation nor for the angry and venomous language that often precedes such evil acts — whether committed against members of the LGBTQ+ community or people who are Black, Indigenous, Latino or Asian American, or because of a person’s religious faith,” the sisters said.

Grieving the loss of life

Likewise, the Redemptorists of the Denver province grieved the loss of life and injuries inflicted and said they extended their prayers “for the well-being of the LGBTQ community in Colorado Springs as it faces the trauma of this attack and the pain it incurred.”

The order’s members, based in Chicago, said in a Nov. 21 statement that they recognized that “LGBTQ people are especially vulnerable to an inordinate and unwarranted amount of violence in the world,” and pledged to work against such violence and discrimination and help those who suffer from it.

The Redemptorists said the shooting was reminiscent of when 49 people were killed and 53 more were injured at the Pulse nightclub in Orlando, Florida, in 2016.

At the time, they said, bishops and Catholic leaders spoke out against the tragedy but when they did “very few mentioned the victims as members of the LGBTQ community.”

Joining in demonstrations and vigils in support of LGBTQ people

New Ways Ministry, a Maryland-based Catholic advocacy outreach group for LGBTQ people, said in a statement that it joined “millions of Catholics in the U.S. and worldwide who mournfully pray over the tragic loss of five lives in the recent shooting at Club Q.”

The group also called on “every bishop to condemn such violence in all its forms. Such a message can deter future perpetrators, and it also expresses pastoral support to LGBTQ people in their communities.”

New Ways Ministry also urged bishops and Catholic leaders “to join in the many demonstrations and vigils in support of LGBTQ people, which will emerge over the coming weeks.” It stressed that all Catholics “should redouble their efforts to end discrimination against LGBTQ people by supporting equality initiatives and laws.”

This view was echoed by Johnny Zokovitch, executive director of Pax Christi USA, who called on Catholic leaders in U.S. dioceses, parishes, universities and schools “to make clear both their condemnation of violence against members of the LGBTQ community and their efforts to end discrimination against LGBTQ people.”