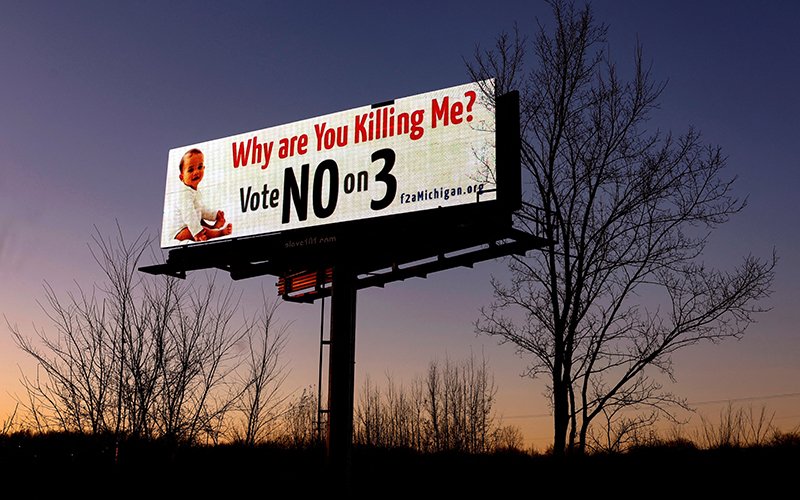 A Michigan billboard against Proposal 3, a ballot measure to codify a right to an abortion, is seen along I-75 outside of Detroit Nov. 6, 2022. Voters approved the measure in the Nov. 8 midterm election. (CNS photo/Evelyn Hockstein, Reuters)

Bring truths of the Catholic faith to the polls

These ballot measures were the first time voters faced the opportunity to weigh in on abortion laws since the Supreme Court’s June Dobbs decision that overturned Roe v. Wade, the1973 case that legalized abortion nationwide.

Catholic bishops in states where these votes took place expressed disappointment and renewed their commitment to keep up the fight to end abortion and to provide support to women and families in need.

“Abortion is now legal in Michigan at an unprecedented level, and millions of lives are at stake,” wrote Detroit Archbishop Allen H. Vigneron in a letter to Catholics posted on the archdiocesan website Nov. 9.

“We awake today to the news that Proposal 3 has passed, altering our state constitution to allow for unregulated and unsafe abortion on demand in Michigan,” he wrote, saying that people of faith are “deeply saddened by this grave assault on the dignity and sanctity of unborn, innocent human life.”

The archbishop called the measure an “unjust and perverse law” and pointed out that in the last several months pro-life advocates in the state had “worked tirelessly to spread the truth about Proposal 3, imploring voters to make an informed decision at the ballot box.”

“I offer my deepfelt gratitude to all who prayed, spread awareness, voted and otherwise worked against this proposal,” he said, “and I share in their sorrow at the outcome.”

He asked Catholics to join him in prayer about this issue and to renew their “commitment to accompanying women and families in need, with greater resolve than ever,” pledging to ” continue our efforts to build a culture of life in which abortion is unthinkable, all families receive the support they need, and the dignity of all people is recognized.”

In October, the Michigan Catholic Conference released a letter to Catholics in the state, urging them to reject Proposal 3 and describing the measure as “the most extreme proposal concerning abortion this state or country has ever seen.”

The measure, also known as the Reproductive Freedom for All Amendment, modifies the state’s constitution to remove restrictions on abortion in the state and eliminate other pro-life laws.

“As citizens and pastors in Michigan, we call your attention to an immense threat to the dignity of human life on this November’s ballot,” the bishops wrote, pleading with Catholics to vote against it.

The California Catholic Conference had similarly urged Catholics to vote against that state’s abortion measure, which was called Proposition 1.

On its website, the Catholic conference — the public-policy arm of the state’s bishops — said the measure “would enshrine the explicit right to abortion in our state constitution, setting a nationwide precedent. It is the most egregious expansion of abortion this country has ever seen.”

It also said the measure was the first time in California when “voters are being asked to vote for unrestricted late-term abortion, ending any real chance for California to protect unborn life in future laws.”

The measure came to the state’s voters after state legislators in 2019 passed a law guaranteeing “reproductive rights.” After the Dobbs decision, the measure’s supporters said the constitutional amendment was needed to provide more protections for abortion.

In September, Bishop Christopher J. Coyne of Burlington, Vermont, wrote to Catholics in the state, urging them to vote against the abortion measure and instead to promote laws and policies that “directly confront the reasons why people choose to have an abortion.”

He said there are “many problematic implications of this proposed addition to Vermont’s constitution. The most problematic, however, may be the explicit intent of our state’s lawmakers by this amendment to create the strongest legal precedent for keeping abortion on demand for any stage of pregnancy, even late-term pregnancies, for any reason.”

In other state ballot measures, Kentucky voters rejected a constitutional amendment that said there was no right to abortion in the state, while Montana voters rejected a measure to approve the Born Alive Infants Protection Act requiring doctors to try to save the life of infants “born alive at any state of development.”

In Montana, in urging voters to support the measure, the state’s Catholic conference issued a statement in September saying it was “the epitome of commonsense legislation” and was needed to “safeguard those infants who, through no fault of their own, are born into some of the most difficult and challenging circumstances imaginable.”

The bishops said the measure reiterated a similar law passed by Congress in 2002 and would go a step further, noting that the previous law did not “provide specific measures for enforcing protection of these helpless infants and failed to specify that a born-alive infant is entitled to medically appropriate care and treatment.”

Kentucky’s Catholic bishops, who urged voters to vote yes on Amendment 2, said in a Nov. 8 statement that they were disappointed that voters rejected the measure but stressed that “this is not the end of the debate or of the need to work diligently to increase respect for the dignity of each and every human life.”

“We pray that the defeat of the amendment will not lead the courts to assume the role of determining public policy on abortion. The General Assembly is the proper venue to settle such deeply divisive issues,” the bishops added in the statement posted on the website of the Kentucky Catholic Conference.

They said that while the measure’s defeat “is cause for sadness,” they also saw the vote as a “call to redouble our efforts at ensuring that every Kentuckian has the support they need to thrive.”

The prelates pledged to renew their commitment “to work with legislators to pass laws that protect the unborn, support women and families, and respect human life and dignity in all stages of life.”

Tags: Abortion, Election News
Copyright © 2022 Catholic News Service, Inc. All rights reserved. Linking is encouraged, but republishing or redistributing, including by framing or similar means, without the publisher's prior written permission is prohibited.