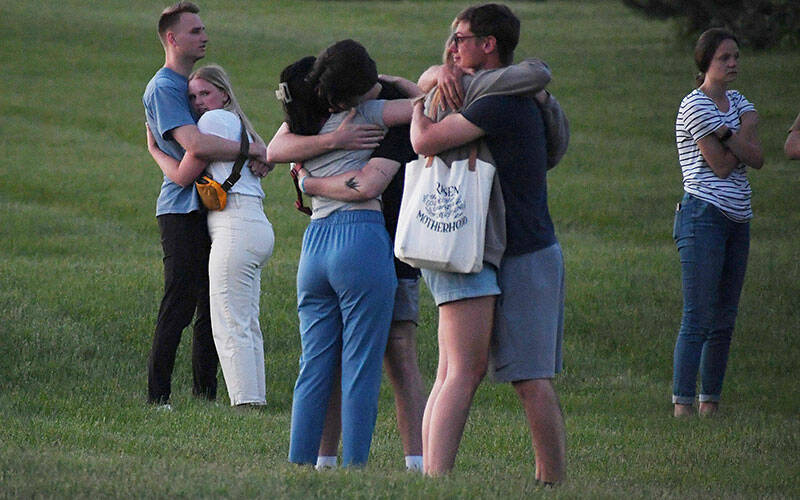 Survivors in Ames, Iowa, hug their family members and friends at the Cornerstone Baptist Church parking lot after a shooting June 2. Two women, both college students, were killed by a lone shooter who turned the gun on himself. (CNS photo by Nirmalendu Majumdar/USA Today Network via Reuters)

WASHINGTON (CNS) — In the wake of recent mass shootings that have devastated local communities and the nation at large, several U.S. bishops, women’s religious orders and Catholic organizations have called for stricter federal gun control measures, while state Catholic conferences have rallied behind local measures attempting to curb the spate of gun violence.

In Albany, N.Y., a few hundred miles from the May 14 shooting at a Buffalo supermarket where a teenager armed with an AR-style rifle killed 10 people, the New York State Catholic Conference backed a package of gun-reform bills announced May 31 by Gov. Kathy Hochul and other state Democrats.

One of the bills, to increase the minimum age required to buy a semi-automatic rifle from 18 to 21, was passed by state legislators June 2.

“This is something that the conference thinks makes a lot of sense, and I think that it is something a large part of society can take a look at and say, ‘This will help,’” said Dennis Poust, executive director of the New York State Catholic Conference.

In an interview with The Evangelist, Albany’s diocesan newspaper, Poust noted that school shootings in Sandy Hook, Conn.; Uvalde, Texas; Parkland, Fla.; and at Columbine High School in Colorado were all carried out by teenagers or young men between the ages of 16 and 20.

He also said changes to gun legislation that many people thought would occur after those mass shootings never happened.

A May 31 memorandum of support by the state’s Catholic conference for the proposed New York gun-reform legislation points out that “no package of legislation could possibly entirely remove the risk of mass shootings, especially when laws vary from state to state. However, the comprehensive approach undertaken by the Legislature and governor here is an important step in the right direction.”

“We must not let Buffalo and Uvalde fade into memory, as has happened with other mass shootings, without strong action to protect our children and all our citizens from this societal evil,” the conference added a day before yet another mass shooting took place in Oklahoma.

The conference also thanked New York’s governor and state legislators for “leading the way in addressing this urgent issue” and urged lawmakers to pass these measures.

Several other state Catholic conferences across the country have similarly supported gun-control measures in recent years.

The day after a teenage gunman with an AR-style rifle opened fire May 24 on two adjoining classrooms in the elementary school in Uvalde, Texas, that left 19 children and two adults dead, the Minnesota Catholic Conference, more than 1,000 miles from the rural Texas town, appealed to the state’s governor and its lawmakers to work across the aisle on a school-safety measure.

Although the legislative session had just ended, the public-policy arm of the state’s bishops tweeted May 25 that there should be a special session to “pass school-safety legislation that protects all students from gun violence.”

“This is something we can do immediately (to) protect our students … and it is time to get it done,” the Catholic conference tweeted.

Jason Adkins, executive director and general counsel of the Minnesota Catholic Conference, said the group was advocating for a permanent state funding stream for student safety for public and nonpublic schools in the state.

“This is something for which legislators should be able to find common ground now. Certainly, the money is there. The bills introduced are a starting point, and hopefully our elected leaders will focus spending the surplus on creating safer learning environments, as schools are repeated targets of violence,” he told The Catholic Spirit, archdiocesan newspaper of St. Paul and Minneapolis.

A May 26 statement by Archbishop Bernard A. Hebda of St. Paul and Minneapolis reiterated the need for a special session to pass this measure.

The archbishop said “no legislation can stop the manifestation of evil,” but stressed this bill was “an important, commonsense first step to helping schools increase security staff, enhance building security, and strengthen violence prevention programs and mental health initiatives.”

“Passing this legislation now,” he said, would give schools time during the summer to evaluate security measures and services to keep kids safe “and then begin the implementation process.”

Ohio, Maryland and Texas bishops speak out on gun laws

In Ohio, Catholic bishops have issued statements against proposals to change the state’s law to expand locations where a person can use a gun in self-defense and opposing a measure to allow concealed handguns to be carried in churches. Members of the state’s Catholic conference also testified in support of a proposal to curb gun violence.

This year, the Maryland Catholic Conference supported legislation, which passed, to ban Marylanders from building so-called “ghost guns” — guns without serial numbers that can be bought online and assembled at home.

Jennifer Allmon, executive director of the Texas Catholic Conference of Bishops, said in a May 26 statement that the Uvalde tragedy was “still so very raw” but the conference wanted to reiterate “that the bishops have advocated for common sense legislation to reduce gun violence in previous legislative sessions and will continue to do so next session.”

On the federal level, Congress is attempting to pass a gun-control measure called the Protecting Our Kids Act, which is likely to pass in the House but then faces a divided Senate, where it needs 60 votes for passage.

In a televised speech June 2 from the White House, President Joe Biden pleaded with Congress to pass what he said are “rational, commonsense measures” to curb gun violence, saying it is time to put an end to the “carnage” and loss of American lives.

The president called for the ban on assault weapons and high-capacity magazines to be reinstated and said the minimum purchasing age for semi-automatic weapons should be raised from 18 to 21.

He also called for a strengthening of background checks and red-flag laws aimed at keeping guns away from those with mental illness. He also urged a repeal of the immunity that shields gun manufacturers from liability.

Mass shootings viewed as both a health and moral crisis

Many of the steps he urged Congress to take also were emphasized in a June 1 letter to congressional leaders from Mercy Sister Mary Haddad, president and CEO of the Catholic Health Association. She described the recent mass shooting as part of a “profound health, economic and moral crisis.”

She said the organization of Catholic hospitals and care facilities recognized “the challenges of coming together to pass gun and community safety legislation,” but stressed that “continued failure to take any meaningful action is unconscionable.”

“We therefore urge you to work expeditiously to come together and pass meaningful legislations so that we can make our communities safer and healthier,” she said.

Another mass shooting results in increased calls for action

On the day this letter was sent, a facility on a Catholic hospital campus in Tulsa, Okla. — St. Francis Health System’s Natalie Medical Building — was the site of another mass shooting, where a gunman killed four people, including the doctor who had treated him for back pain.

In response, the CHA echoed its call for Congress to enact stricter gun laws, adding in a June 2 tweet: “We are saddened to hear of yet another mass shooting, this time in Tulsa at one of our member health systems.”

Catholic Charities USA similarly tweeted June 2 a plea for “elected officials to take concrete action to help prevent the scourge of gun violence in this country.”

In late May, the group stressed that thoughts and prayers in the wake of mass shootings is not enough.

“We know that faith without works is dead, and prayer without action will not bind the wounds of those who suffer.,” it said. “Along with countless Catholic voices, we join the call to our elected officials to take concrete action to help prevent the scourge of gun violence in this country. As faithful people of goodwill, we can and must do more to protect our sisters and brothers.”