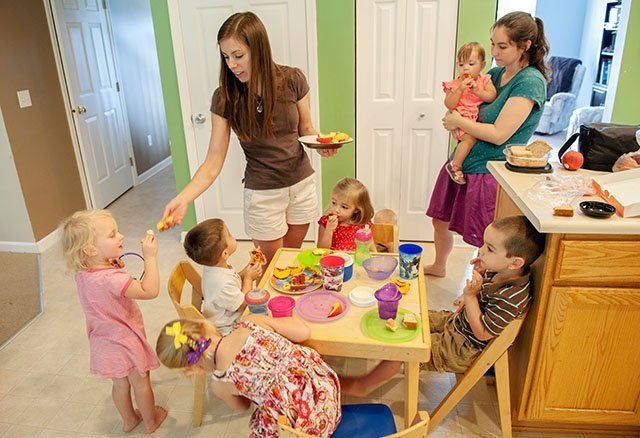 Kids enjoy their snack time with some help from Shauna Walczak (center) and Samantha Richards (right) during a meeting of the Catholic Moms of Rochester group at the Macedon home of Anne Bohn Sept. 10.

Birthday cards with pictures of the Blessed Mother that have been lovingly colored and glued? Check.

It was fitting that for the first-ever meeting of Catholic Moms of Rochester, the group decided to throw a birthday party for an inspirational mom: Mary. The party took place Sept. 5 and marked the feast of the Nativity of the Blessed Virgin on Sept. 8.

The group is not affiliated with a parish or the diocese, but is open to Catholic moms in the area. The aim is to mix faith and fun, said founding moms Sarah Gutekunst of Irondequoit, a parishioner of Holy Cross in Charlotte, and Shauna Walczak of Rochester, a parishioner of St. Pius Tenth Parish in Chili, who met through the group St. Thomas Aquinas Homeschoolers of the Rochester Area.

During its first gathering, the children painted their handprints on a sign for the group, prayed a decade of the rosary, decorated cards and sang happy birthday.

Just before they blew out the candles, 4-year-old Aiden Richards had a question.

"Why is Mary 2 years old?" he asked, after counting the two candles.

Gutekunst said the roots of the group are in a Catholic moms group she was involved with in northeastern Ohio. She had moved to Ohio from Texas and wanted to make friends. Last October she moved to the Rochester area and again felt a lack of connection.

"It was the longest winter of my life, living in an apartment and not really knowing anyone," said Gutekunst, who is mom to London, 7, and Reese, 3.

Now that she has moved into a house, she said she decided to try starting a moms group modeled after the Ohio group. The local group has a full slate of activities for stay-at-home moms and evening and weekend activities for those who work outside the home during the day. Gutekunst said she hopes to include several social Mom’s Night In programs as well. Although the group is named Catholic Moms of Rochester she said the group welcomes Catholic dads.

"Mary is saying, ‘You saw what it could be. Now let’s make it happen,’ " Gutekunst said of the group.

Already, the group’s membership has grown to 24 moms, thanks in part to the social website Meetup. Additionally, when she was out and about, she ran into another mom, Samantha Richards, at a local park and then at Mass, and then later at the market. It was enough for a friendship to form.

"I feel like God was bringing us together," said Richards, whose children are Aiden; Ben, 2; and Brenna, 14 months. Like Gutekunst, Richards lives in Irondequoit and attends Holy Cross.

"I think my faith helps me to get through my day," Richards said. "I look up to Mary when it’s rough and I see what she had to do for Jesus and everybody."

Walczak said she used to be able to set aside time for her faith, but these days she tries to pray throughout her day.

"Being a mom has really changed my perspective on using my faith to get through my day," said Walczak, who is a mom to Grace 2 1/2 and Augustine, 1.

She said she used to set aside time for prayer, but that’s a luxury she is no longer afforded.

"I’ve learned to pray in the moment," Walczak said.

She said she recently heard an inspirational quote that sums up how she feels: "When you change how you look at things, you change what you look at."

"Just keeping that in mind and looking at everything as a blessing," Shauna said.

Gutekunst said when she doesn’t take time for faith, she finds herself less patient and more inclined to gossip.

"I almost feel like I have no choice but to depend on my faith, because I wouldn’t get through my day without it," Gutekunst said.

EDITOR’S NOTE: For details on the Catholic Moms of Rochester, visit www.meetup.com/Catholic-Moms-of-Rochester.