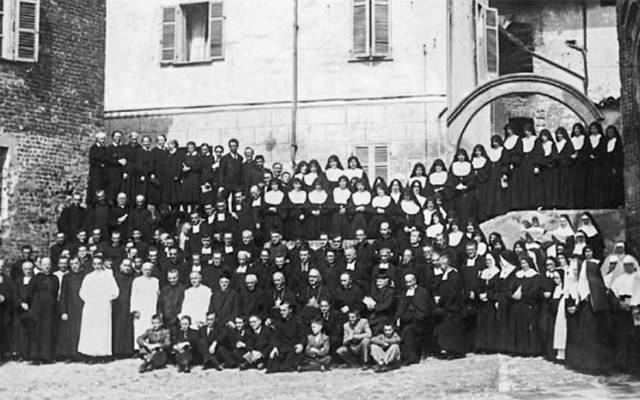 Priests and religious gather for a photo during a reunion in the northern Italian village of Lu in 1946, more 60 years after their mothers began praying for vocations to come from their own families. (Photo courtesy of the Mothers of Lu)

This quote is frequently attributed to Pope St. Pius X, and it sums up the sentiment driving the formation of a new group that recently started in the Diocese of Rochester.

The Mothers of Lu is a group of local Catholic mothers who have committed to praying for vocations to religious life to come from within their own families. The group was inspired by the example of a group of women from the small village of Lu, located in northern Italy, who in 1881 became frustrated with the lack of priests in their region, explained Janene Loughran, one of the founding members of the local group.

“They decided to take matters into their own hands ‚Ä¶ and started praying together for vocations to come straight from their own families. The result was over 300 priests and religious within about 65 years,” Loughran added.

Father Peter Van Lieshout, pastor of St. Peter Parish in Ontario County, shared this story at a June picnic for St. Thomas Aquinas Homeschoolers of the Rochester Area, and by July the local Mothers of Lu group was up and running, said Loughran. She founded the group with fellow Catholic mothers Shauna Walczak and Nancy Jo Bohrer, and by mid-September there were approximately 30 mothers in the group.

“This isn’t something that we just take lightly,” Loughran said. “What we’re offering back to God belongs to him to begin with.”

The mothers meet on the first Tuesday of each month at 7 p.m. at St. Jerome Church in East Rochester. They spend an hour in adoration before the Blessed Sacrament, then pray a rosary together. After that a local priest will either give a reflection or, if he is not able to attend, he will provide one and the group will read if after praying the rosary. The meetings will conclude with a recitation of the Mothers of Lu prayer followed by some social time.

“I think one of the most beautiful things about it is that we’re not just praying for vocations from our families, but we’re also asking that our families be a place where we can allow our children to properly discern their vocations,” Walczak remarked. “We fully realize that God has already called them to vocations. (We’re) just creating an environment where they can properly discern what that call is.”

The group’s founders initially received some feedback from mothers who thought it wasn’t their place to pray for their children to become priests, but Walczak said the group is not trying to force vocations. The women are not simply praying that their sons become priests. They are praying that their children will listen to God and be open to his plan for them, whether that plan includes the priesthood, religious life or married life, said Loughran.

“It’s all in cooperation with what God’s plan is,” she explained.

At the same time, Loughran said she has told her six children how important priests are to Catholic life.

Bohrer said she initially was hesitant when Loughran asked her to help start the group.

“It took me a day or so to say yes, and I approached it as, I really want to work on virtues and have our family be an atmosphere where my sons and my daughter can truly discern their vocation, whatever that might be,” she recalled.

One July morning during daily Mass, however, God showed her that she shouldn’t be afraid to let her sons grow up to be priests and to serve on the altar with Christ, she said.

“That was a real moment of conversion in my own heart,” said Bohrer, who belongs to St. Peter Parish.

The mothers recognize that it takes courage to contemplate or even support the priesthood at a time when newspapers and news broadcasts regularly include stories of alleged sexual abuse of children by priests. Yet it’s precisely because of the current social climate that such a focus on vocations is necessary, Walczak maintained.

“I think this is especially timely,” she said. “It’s a beautiful submission to God’s will. It’s a testament to the fact that regardless of what’s happening, we just need to always leave as much room as possible for God’s will to be done.”