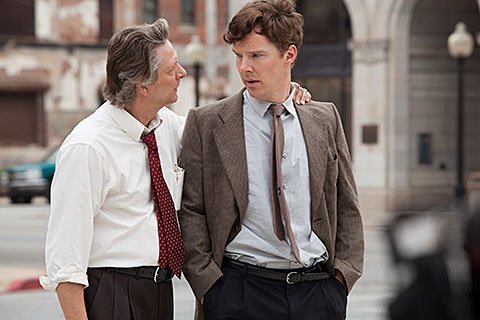 NEW YORK (CNS) — Somewhere Norman Rockwell must be spinning in his grave.

The artist, known for his beloved paintings of traditional American life — including images of happy families gathered around the dinner table — would be horrified at the dysfunctional goings-on in "August: Osage County" (Weinstein).

The unspeakable antics of the relatives at the heart of this grim comedy — all of whom excel at being unhappy — would not be out of place on "The Jerry Springer Show."

Based on the Pulitzer Prize-winning play by Tracy Letts (who also wrote the film’s screenplay) and directed by John Wells ("The Company Men"), "August: Osage County" is a brutal assault on the senses as, one by one, each family member rises and falls. Here, the ties that bind are more like nooses around various necks, and reconciliation takes a back seat to retribution.

As Violet, the cancer-stricken matriarch of the Weston clan, Meryl Streep chews up the scenery with profanity-laced tirades fueled by a steady diet of alcohol, cigarettes and pills. She is vicious and manipulative, a bewigged spider drawing not-so-innocent victims into her tangled web.

Violet’s three daughters also assemble, and we learn about their many woes. Long-suffering Ivy (Julianne Nicholson) has never left home and is fed up serving as her mother’s primary caregiver. She’s secretly in love with shy Charles (Benedict Cumberbatch), her first cousin — he’s Mattie Fae’s son — and they plan on running off together.

The flighty Karen (Juliette Lewis) arrives from Florida with her pot-smoking fiance Steve (Dermot Mulroney), a smooth talker who has been married thrice before.

And then there’s Barbara (Julia Roberts), Daddy’s favorite and Mommy’s nemesis, who moved away to Colorado with her husband Bill (Ewan McGregor), and teenage daughter Jean (Abigail Breslin). Turns out, Barbara’s marriage is on the rocks, and her 14-year-old is a mess, smoking dope and fooling around with sleazy Steve.

No sooner has the tribe gathered than Beverly is found — at the bottom of a nearby lake, a suicide. His death forces long-suppressed emotions and secrets to the surface, and the post-funeral family dinner is a nightmare of accusations and assaults: "truth-telling," as Violet calls it.

To elaborate further would spoil the twists and turns of the story. Suffice it to say that a happy ending for this depressing lot is most unlikely, and a whole lot of good food — as well as people — wind up on the dining room floor.

Viewers will sympathize with Barbara when she declares, "Thank God we can’t tell the future, or we would never get out of bed."