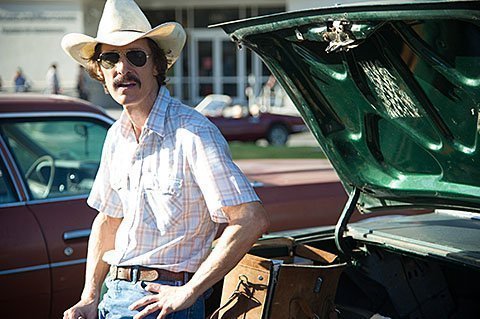 NEW YORK (CNS) — The onset of the AIDS epidemic in the 1980s, with its devastating impact on victims and on society as a whole, provides the backdrop for the drama "Dallas Buyers Club" (Focus).

Based on a true story, the movie charts the odyssey of Ron Woodroof (Matthew McConaughey), a macho Texas cowboy whose life is turned upside down when he unexpectedly tests positive for HIV in 1985.

Director Jean-Marc Vallee ("The Young Victoria"), working from a screenplay by Craig Borten and Melisa Wallack, re-creates a sordid world of sex, drugs, and general decadence. Couple this seamy milieu with a graphic portrayal of the ravages of AIDS — a skeletal McConaughey lost 50 pounds for the role — and the result is, by any standard, a tough film to watch.

Despite all the sinful behavior on display, there is a worthy (and Christian) message underlying the proceedings, one that condemns bigotry and uplifts compassion for the suffering. Yet the fact that immorality of various stripes is consistently given a pass in the script precludes endorsement even for a mature and restricted audience.

An electrician by trade, Woodroof moonlights as a rodeo cowboy. His devil-may-care lifestyle, characterized by an addiction to cocaine and rampant unprotected sex, has begun to take its toll.

An accident at work lands him in the hospital, where Dr. Eve Saks (Jennifer Garner) discovers he is HIV-positive, with 30 days at most to live. Awash in disbelief and in a homophobic rage, Woodroof storms off.

As his condition worsens and he is ostracized by friends, Woodroof must confront his destiny, and refuses to accept his apparent death sentence. He discovers that, while there is no cure for AIDS, experimental treatments abound to relieve its symptoms and prolong life.

With the U.S. Food and Drug Administration, in his view, overly cautious about approving new drugs, Woodroof heads south to Mexico. There, alternative medicines help him. So he decides to smuggle some of them across the border — regrettably, dressed as a priest — to share with others in need.

Together, Woodroof and Rayon establish a "buyers club" whose members pay monthly dues for access to experimental drugs, smuggled in by Woodroof in a variety of disguises.

At first a money-making enterprise, the club transforms Woodroof. He gains solidarity with his fellow victims as his deep-seated prejudices disappear.

The scheme is very popular, and soon incurs the wrath of pharmaceutical companies, the FDA and the Internal Revenue Service. Woodroof, undeterred, is ready to take his fight to the courts.

Predictably for a product of contemporary Hollywood, "Dallas Buyers Club" fails to condemn sexual excess of any kind. It also promotes acceptance, not only of people as individuals but of their actions, even when those actions — whether heterosexually or homosexually oriented — are incompatible with the moral teaching of Scripture and sacred tradition.