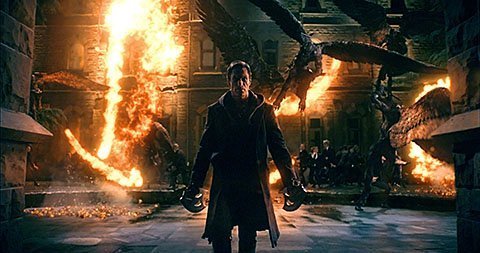 Aaron Eckhart stars in a scene from the movie "I, Frankenstein." The Catholic News Service classification is A-III -- adults. The Motion Picture Association of America rating is PG-13 -- parents strongly cautioned. So me material may be inappropriate for children under 13.

NEW YORK (CNS) — Overblown but mostly harmless, the gothic actioner "I, Frankenstein" (Lionsgate) does little to offend but equally little to command audience interest. Tricked out with a surprising amount of Catholic imagery, it otherwise fails to make much of an impression.

Mary Shelley’s classic novel provides only the premise — and, of course, the tormented main character, played by Aaron Eckhart — for this dark fantasy. The substance of the story, such as it is, comes from co-screenwriter Kevin Grevioux’s graphic novel.

This source apparently endows Dr. Frankenstein’s unholy creation not only with unwanted life but with unwelcome immortality as well. Accordingly, after some 18th-century exposition, and 200 years of self-imposed exile, he pops back up to do battle in the age of cellphones.

Here he once again gets mixed up in the fairly straightforward good-vs.-evil struggle at the heart of the post-Shelley mythos. As we know from the first glimpse of it we were given back in the era of powdered wigs, this contest pits an armed band of angels-turned-animated gargoyles, led by their queen, Leonore (Miranda Otto), against the hordes of hell under the earthly command of a well-tailored demon prince by the name of Naberius (Bill Nighy).

Though they stop short of explicitly acknowledging the primacy of the pope, the gargoyles — who can also take human shape — are unmistakably Catholic. They live in a cathedral, refer to their weapons, which must be blessed before being employed, as sacramentals and honor their fallen by hanging each departed angel’s scapular on the wall.

They also claim to be taking their marching orders directly from St. Michael the Archangel, whose aid, in a moment of crisis, Queen Leonore can be heard invoking via the familiar prayer that was once recited at the end of every Low Mass. Another scene finds the same character assuring Frankenstein — who prefers to go by the name Adam — that "all life is sacred."

And all combat, in director and co-writer Stuart Beattie’s adaptation of Grevioux’s book, is gore-free: Defeated angels return to heaven in beams of light, while dispatched demons explode into, well, great balls of fire. So, despite some idle metaphysical speculation that might confuse the poorly catechized — does Adam have a soul or not? — and despite the elements listed below, "I, Frankenstein" is likely acceptable for mature adolescents.

The film contains constant but bloodless violence, brief images of a gory wound and a single crude term. The Catholic News Service classification is A-III — adults. The Motion Picture Association of America rating is PG-13 — parents strongly cautioned. Some material may be inappropriate for children under 13.