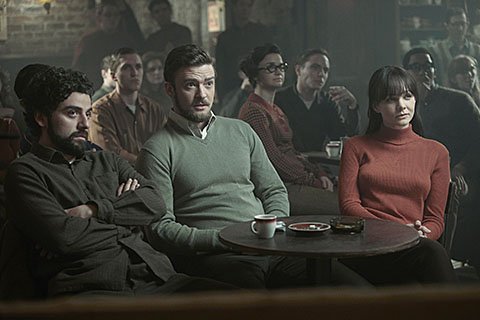 Oscar Isaac, Justin Timberlake and Carey Mulligan star in a scene from the movie "Inside Llewyn Davis." The Catholic News Service classification is O -- morally offensive. The Motion Picture Association of America rating is R -- restricted. Under 17 requires accompanying parent or adult guardian.

NEW YORK (CNS) — The trials and tribulations of a 1960s folk singer are chronicled in "Inside Llewyn Davis" (CBS), a dark comedy-drama set amidst the moody music scene of New York City’s Greenwich Village in the early years of that turbulent decade.

Brothers Joel and Ethan Coen ("No Country for Old Men"), who directed and wrote the screenplay, were inspired by the life of genre legend Dave Van Ronk (1936-2002). Aesthetically, the product of the siblings’ collaboration is an absorbing, atmospheric odyssey with hummable music.

Regrettably, however, their script is chock-full of filthy dialogue and, worse still, freighted with misguided values concerning the sacredness of human life and the gift of sexuality.

It’s 1961, and Llewyn Davis (Oscar Isaac) is down on his luck. His musical partner has committed suicide, leaving Llewyn professionally adrift, struggling to find a new niche as a solo act. He has cut the eponymous album — the title of which mimics that of Van Ronk’s seminal 1964 recording, "Inside Dave Van Ronk" — but it’s going nowhere.

Winter has set in, and Llewyn, without money or even a warm coat, is on the streets. As he searches for gigs, he relies for shelter on the kindness of his pals all over Manhattan, his ex-girlfriend, Jean (Carey Mulligan), among them.

Jean is in love with her musical partner, Jim (Justin Timberlake), but she’s carrying Llewyn’s baby. Jean wants out, as does Llewyn, so he arranges for her to have an abortion.

We learn that Llewyn has made such arrangements before for other girlfriends. He is staggered to discover, however, that one of them did not go through with the destruction of her baby after all. Consequently, he has a 2-year-old child out there, somewhere.

While this brief pro-life moment is refreshing, the revelation does not appear to change Llewyn’s self-absorbed ways, nor does it convince him to persuade Jean to change her mind.

Llewyn’s edgy musical style is out of step with the more popular, clean-cut folk singers. So he decides on a change of venue.

Neither the Windy City nor his newfound companions turn out to be what Llewyn was hoping for, though, and he soon finds himself back in his original down-and-out situation. To the strings of the ballad "Fare Thee Well," our antihero must choose between a bleak future in music or a mundane job with a steady paycheck.

For all but one of his offspring, by contrast, there is no future to worry about.

The film contains a benign view of abortion, promiscuity and contraception, drug use, pervasive profane and crude language and some sexual banter. The Catholic News Service classification is O — morally offensive. The Motion Picture Association of America rating is R — restricted. Under 17 requires accompanying parent or adult guardian.