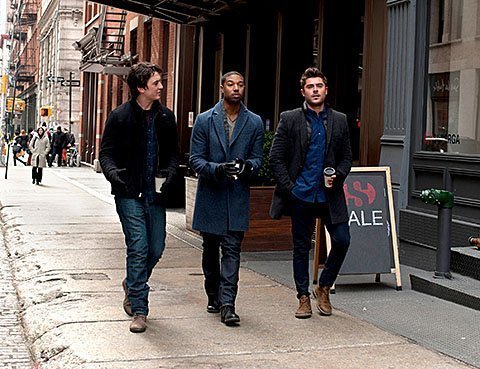 Miles Teller, Michael B. Jordan and Zac Efron star in a scene from the movie "That Awkward Moment." The Catholic News Service classification is O -- morally offensive. The Motion Picture Association of America rating is R -- restricted. Under 17 requires accompanying parent or adult guardian.

NEW YORK (CNS) — "That Awkward Moment" (Focus) is, sad to say, not much more than a collection of smutty moments.

It presents itself as a quip-filled romantic comedy populated by pretty people including Zac Efron, who is frequently seen nude, as commitment-phobic Jason.

Jason and his friends, all in their 20s, have upscale jobs and shabby-chic apartments in the Murray Hill neighborhood of New York City. They long for near-daily sexual encounters with women they meet in bars, but flee at the first sign of stability.

Eventually they arrive at some form of maturity and wisdom, but the film takes an ugly approach before getting them there.

All women are prey; all men are stereotypes. Jason’s friend Daniel (Miles Teller) is a fast-talking Jewish man with honesty issues. His other pal, Mikey (Michael B. Jordan), who is struggling with unfaithful wife, Vera (Jessica Lucas), is an African-American who drowns his troubles in 40-ounce bottles of malt liquor.

Writer-director Tom Gormican fills the story with jokes about the functions and malfunctioning of the male anatomy.

The "perfect" girl in this misogynistic world is promiscuous, jokes easily about sex acts, and admires, or at least tolerates, dishonesty in men.

Jason finds his perfect woman in sensitive Ellie (Imogen Poots). Ellie loves him despite his mistaking her at first for a prostitute, and his later abandonment of her after her father dies. Daniel finds love with the potty-mouthed Chelsea (Mackenzie Davis), while Mikey’s issues with Vera are never fully resolved, unless the "message" is supposed to be that women are as untrustworthy as men once they manage to get married.