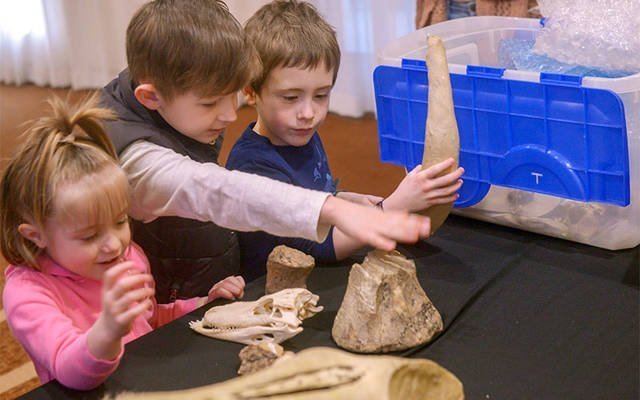 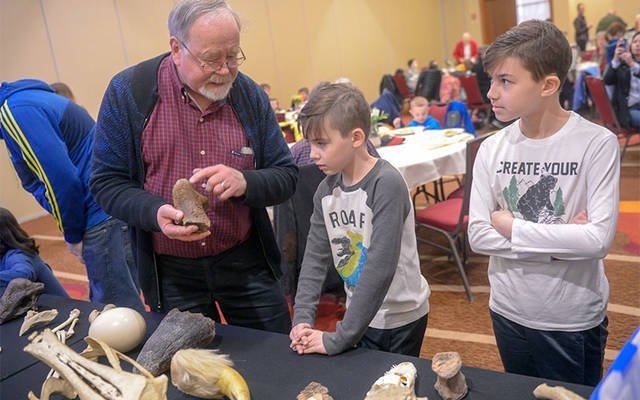 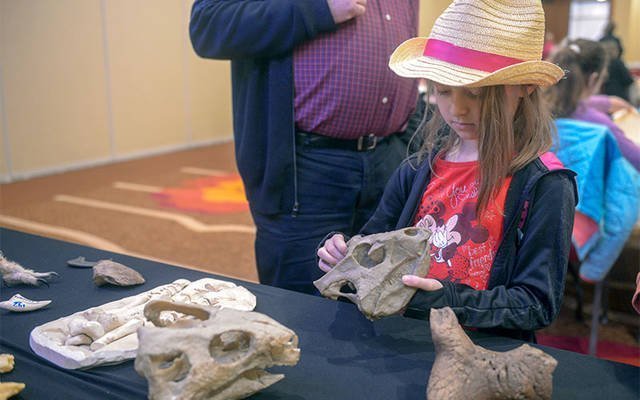 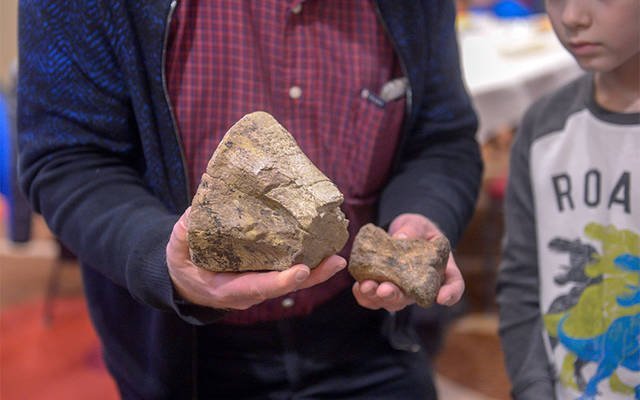 Peter Dodson, a Catholic paleontologist, holds some of the dinosaur fossils that were on display prior to his March 30 presentation at Auburn's Hilton Garden Inn. (Courier photo by John Haeger)

PITTSFORD — What do dinosaurs have in common with the Catholic Church?

Both count Peter Dodson among their biggest fans, for one thing. An accomplished paleontologist and a committed Catholic, Dodson is a professor of vertebrate paleontology and veterinary anatomy at the University of Pennsylvania. He traveled to the Diocese of Rochester in March to talk with more than 150 local Catholics about the connection between faith and fossils, noted Deacon Dennis Donahue, new-evangelization coordinator at Auburn’s St. Mary Parish as well as Ss. Mary and Martha Parish.

Deacon Donahue, who coordinated Dodson’s visit in conjunction with officials from St. Bernard’s School of Theology and Ministry, said the paleontologist’s presentations were well-received by people of all ages. Dodson spoke to 70 middle-school students March 29 at Siena Catholic Academy in Brighton and to 35 younger children March 30 at Auburn’s Hilton Garden Inn, where the children had the opportunity to touch some of the fossils Dodson has unearthed over the years.

Adults also had the chance to touch a fossil — a vertebrae more than 150 million years old — after listening to Dodson’s March 28 presentation at St. Bernard’s as well as a March 29 talk at the Auburn hotel. The talks geared toward adults focused more intently on the alleged conflict between science and religion.

These days there’s a popular misconception that science and religion contradict each other, Dodson said, noting that he was unaware of this belief when he embarked on his scientific career path. A lifelong Catholic, Dodson had never noticed any potential conflict between science and religion, so he was taken aback when he attended a seminar during which a respected evolutionary biologist put forth what Dodson termed “an atheist manifesto.”

“He said that this is what evolution shows us: There is no God, there is no soul, there is no life after death, there is no such thing as free will. (He said) a scientist who believes in God is a hypocrite, and you must check your brains at the back of church,” Dodson recalled.

The speaker maintained that the number of evolutionary biologists who believed in God could be counted on one hand, and Dodson, feeling stunned and alone, left the seminar and spent the next few days “in a funk.” Later, however, Dodson realized that no studies had ever been conducted to back up the speaker’s claims.

“He set me on a course of study and investigation and learning and engaging in this topic,” said Dodson, who later became the founding president of the Philadelphia Center for Religion and Science.

Decades of study have reinforced Dodson’s initial belief that science and religion are not at odds with each other. In fact, a later survey showed that approximately 40 percent of scientists hold some sort of religious beliefs, he said.

“It’s the atheists in science that make the most noise, but understand that religious belief is not going to go away,” Dodson said.

The field of science actually developed in western Europe because of religious beliefs, not in spite of them, he added.

“Modern science is a fruit of western Christianity. Until the Enlightenment, virtually all scientists were persons of faith, and doing science was an act of worship, and exploring creation was praising the creator,” Dodson said.

Science and religion actually complement each other, Dodson said, noting that one of his heroes, Rabbi Jonathan Sacks, likens the two fields to the two sides of the human brain and heart.

While science is a “tremendously valuable human enterprise,” it does not tell people how they ought to live their lives or treat their neighbors, Dodson said. And the Bible does an admirable job of showing people how to get to heaven but is not meant to be a scientific manual, he said.

“So what then of the dinosaurs? I say that dinosaurs are one of the jewels of creation,” Dodson said. “God loved dinosaurs, and like all creation, dinosaurs give praise to God, so remember the works of the Lord are trustworthy and the heavens declare the glory of God.”