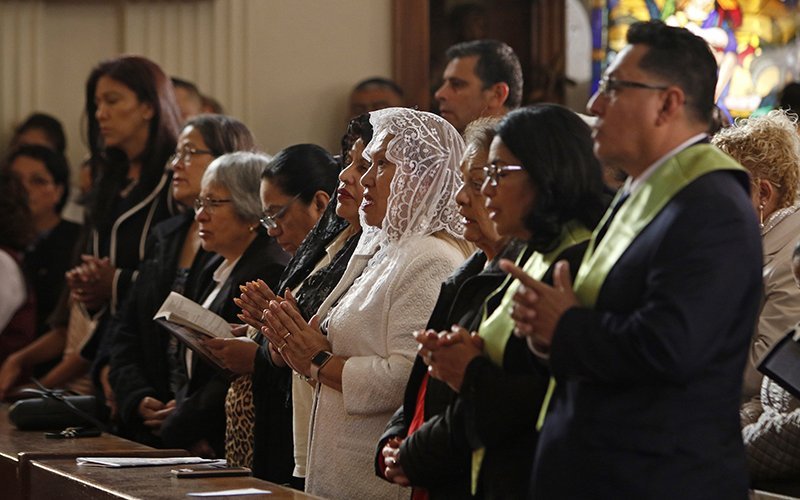 Worshippers pray during a Spanish-language Mass Oct. 14, 2018, at Our Lady of Loretto Church in Hempstead, N.Y., a parish in the Diocese of Rockville Centre, N.Y. (CNS photo/Gregory A. Shemitz)

Parenthood, always a work in process

Almost from the time he was born at a Catholic hospital in the San Fernando Valley, our son was destined to practice the Catholic faith.

After all, his mom, a born and raised Catholic, started teaching at the parish preschool when he was just a year old, and for the next 40 years worked primarily in parish and diocesan liturgical and music ministry. His dad, a convert to the Catholic faith, has spent 30 years (and counting) working for the Catholic press.

In addition to weekly Mass, both parents’ work involved a lot of time at Catholic parishes, schools and weekend events, many for which their son dutifully accompanied them with remarkably little fuss.

That was partly because he enjoyed traveling, but also because it gave him an awareness of and appreciation for the cultural and demographic differences within our local church (which, given the size of the Archdiocese of Los Angeles, can be significant).

At the risk of sounding heretical, that’s one reason we are grateful that our son is a product of public school education, save for his first few years in Catholic school.

It has always been our parental belief — our conviction really — that our own public school experience helped us appreciate the diversity in our community, particularly the different expressions of faith and culture and the goodness present in all of God’s creation.

Our son has happily embraced that diversity, and those who recognize that quality have embraced him. As a teen, by virtue of his Spanish-speaking skills, he was invited to join his high school’s Latino Club, proudly becoming its one and only blue-eyed Anglo, and made friends throughout his school with students of all races, cultures and faith backgrounds.

During the pandemic, when many churches were closed for extended periods, he has missed those personal connections with his parish community, and being able to lector (a ministry in which he excels), and receiving the Eucharist.

But he remains, in every spiritual sense, a fully, consciously and actively practicing Catholic, watching the weekly livestream Mass from the Cathedral of Our Lady of the Angels, softly reciting the assembly’s responses.

Most of all, he is a good, kind and loving young man. He does not broadcast his Catholic faith to the world except by his actions, showing compassion and respect for those less fortunate, and doing what he can to make the world a better place.

So how, as parents, did we nurture our son’s strong belief in Jesus? Was it being so involved in faith-related activities? Did we insist that he believe what we believe, and practice what we practice?

Not at all. All we required was that we attend Mass as a family until he was an adult, and then he’d be free to choose his own course — which he has, seeking to model the teaching of Jesus in his life as we have in ours.

That means, sometimes, that we need to acknowledge when and how we have fallen short; to make amends, as best we can; and to recognize that in our world, in our church and even in our Catholic workplaces, people don’t always act as Jesus would have them act.

And that may be the key. As parents, it doesn’t really matter how involved you are in the life of the Catholic Church; it’s how you live your life in the context of that faith — especially in showing love, respect, kindness and compassion for others — that sets the tone for how your children live theirs, well into their own adulthood.

Or, as the Book of Proverbs declares: “Train the young in the way they should go; even when old, they will not swerve from it” (22:6).