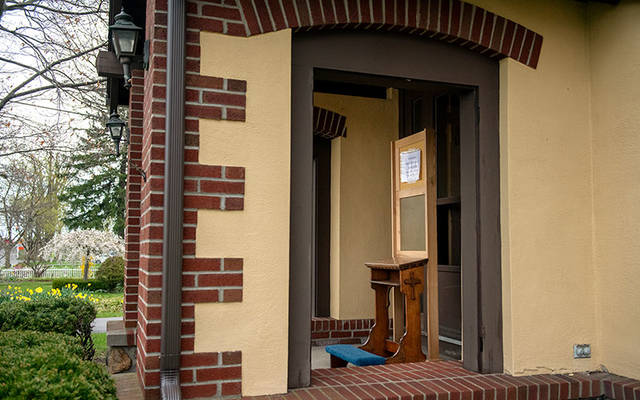 To encourage social distancing, Father Peter Matola has set up a temporary confessional outside of the rectory at St. John the Evangelist Church in Spencerport. (Courier photo by Jeff Witherow)

Although local Catholics currently are unable to attend Masses at their parish churches or gather for Bible studies or youth-group meetings, parish staff members and volunteers have found creative ways to continue offering many such opportunities online via websites, social media and videoconferencing platforms.

Still, some church activities cannot be done online, and among them is the sacrament of reconciliation, explained a March 17 letter from Bishop Salvatore R. Matano to priests, pastoral administrators and parishioners in the Diocese of Rochester.

“Confessions must be made individually and may never be heard via social media or by telephone,” the bishop’s letter states.

Yet, noting that the sacrament of confession is a great comfort in times of uncertainty, the bishop wrote that priests should make themselves available for confession regularly, while taking precautions to limit potential for spreading the novel coronavirus.

“Priests are to use only those spaces that have a screen with a cloth separating the priest and the penitent as much as possible, to prevent airflow,” Bishop Matano stated. “If this is not feasible, priests are to move to a larger space and set up a screen ‚Ä¶ preserving discretion.”

Priests throughout the diocese have found various ways to carry out the bishop’s directive, hearing confessions regularly while maintaining both the privacy required for the sacrament and the safety of penitents and confessors.

In mid-March Father Peter Van Lieshout, pastor of St. Peter Parish in Phelps, Clifton Springs and Shortsville, set up a makeshift confessional on the front porch of the parish rectory in Clifton Springs. He then filmed a short video explaining how to use the confessional and posted the video on the parish’s website.

In the video, Father Van Lieshout said he is available to hear confessions each weekday between 5:30 and 6 p.m.

“What I want you to do is pull up in your car in front of the rectory, and then stay in your car until it’s your turn for confession, so that gives the person in front of you, the penitent, enough personal space to be able to make their own confession,” Father Van Lieshout explained in the video.

Once the previous penitent is done, he continued, “You’re going to come up the steps of the rectory and just ring the doorbell — that lets me know inside that you’re here, that there’s a penitent here — and then check out the set-up we’ve got.”

After ringing the bell, penitents walk to the rectory’s front window. A confessional screen has been set up in front of the window, and another cloth has been hung on the other side of the screen, inside the window. These screens prevent possible contagions from spreading between the penitent and Father Van Lieshout, who hears confessions from inside the rectory. A trifold wooden screen set up perpendicular to the confessional screen outside also helps protect the privacy of penitents.

Over in Wayne County, Father Symon Peter Ntaiyia has not moved his parish’s confessions outdoors, but remarked that he did hear one confession from his car. Father Ntaiyia, who is pastor of the cluster of St. Katharine Drexel and St. Maximilian Kolbe parishes, said he was in his car in Macedon recently when someone asked if he could receive the sacrament of reconciliation. Both Father Ntaiyia and the penitent, standing several feet from the car, were wearing face masks, and Father Ntaiyia heard the confession through his rolled-down window.

This is not the norm, however, the priest said. Those wishing to receive the sacrament should contact Father Ntaiyia through the St. Katharine Drexel or St. Maximilian Kolbe parish offices to make an appointment. He said he is using a room in the parish center to hear confessions because it is large enough to allow the confessor and penitent to observe the requirements of social distancing while still maintaining privacy.

Several other parishes throughout the diocese have moved the sacrament of reconciliation from the confessional into larger spaces, for similar reasons.

“We need to look for ways to avail ourselves and not have people have to wait for a sacrament that is possible. Unlike Communion, this is possible without endangering anyone,” Father Ntaiyia said.