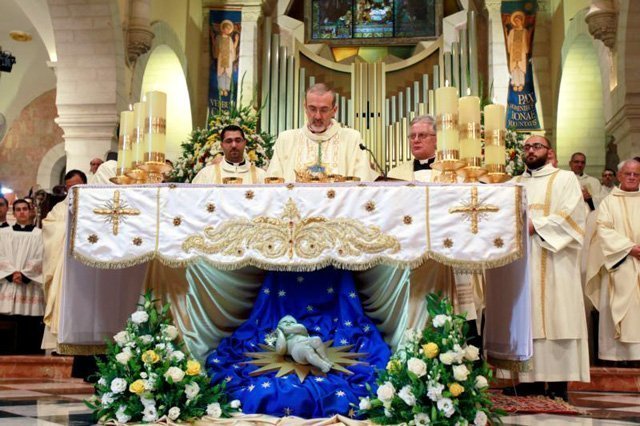 Archbishop Pierbattista Pizzaballa, apostolic administrator of the Latin Patriarchate of Jerusalem, celebrates Christmas Mass at the Church of the Nativity in the West Bank town of Bethlehem.

BEIRUT (CNS) — Lamenting the exodus of Christians from their ancestral homelands, Catholic patriarchs of the Middle East pleaded for peace and security in their annual Christmas messages.

In separate statements, the prelates shared their anguish regarding the persecution and uprooting of Christians from the region.

Cardinal Bechara Rai, patriarch of Maronite Catholics, appealed to the international community to work to end terrorism "that is killing and displacing families and depriving them of their rights and dignities" He made the comments in his message from Bkerke, the patriarchate north of Beirut.

He also called upon the U.N. Security Council "to work seriously to find political solutions to the wars, aimed at bringing comprehensive and lasting peace and the repatriation of refugees back to their homelands."

In his message, Syriac Catholic Patriarch Ignace Joseph III Younan called attention to "our beloved brothers and sisters of Syria and Iraq … deprived of the Christmas joy, having endured the horrible consequences of war, violence, and all kind of persecutions." They suffered "all this hardship" because of their Christian faith and their willingness "to persevere in faithfulness to Jesus the Savior," he added.

Patriarch Younan reiterated that Christians were "uprooted from their lands and driven out unjustly from their homes by barbarian terrorists, in Mosul and the Plain of Nineveh, Iraq," referring to the exodus of some 100,000 Christians — among them more than 60,000 Syriac Catholics — when the region was overtaken by Islamic State militants in 2014.

"How would they welcome Christmas, but in tears and anxiety for their future!" the patriarch wrote.

Regarding his visit in late November to the recently liberated Christian villages in the Nineveh Plain, Patriarch Younan said "there is still a lot to do" to inspire confidence "to our eradicated and exiled community" to return to their ancestral land.

"We have to keep hoping that the local government and international leaders will expel the terrorists and restore peace and security," he said, emphasizing that this is a basic condition for the return "of our uprooted people."

"We hope the same for all the inhabitants of war-torn Aleppo, the second largest city of Syria, after being liberated and reunified," he added.

Patriarch Younan expressed his appreciation for the "praiseworthy efforts of many Catholic politicians in the West who would disagree with the official policy of their government in dealing with the plight of Christians in the Middle East."

"We need the honest and courageous solidarity of elected people, like Congressman Chris Smith of New Jersey, to speak up on behalf of Christians and other minorities who have been oppressed, abused and up-rooted by jihadists who kill innocents in the name of their religion, either in Iraq, Syria, Egypt and Nigeria."

Before Christmas, Smith, R-New Jersey, visited Irbil, in the Kurdistan region of northern Iraq to meet with Christians who had fled Islamic State forces.

The patriarch said it is "quite evident that our people have been persecuted because of religious hatred and forgotten because of the political opportunism of the powerful of this world."

Patriarch Younan, a native of the Syrian province of Hassake, served for 14 years as bishop of Our Lady of Deliverance Syriac Catholic Diocese of the U.S. and Canada, which is based in Newark, New Jersey. He was elected patriarch in January 2009.

Melkite Catholic Patriarch Gregoire III Laham, in his message, stressed that "today in the Middle East, the cradle of Christianity, the Christian presence is threatened … by wars that have given rise to this terrifying exodus, especially of Christians."

"This is a prayer for the peace of Christmas to protect our suffering countries, especially Palestine, Iraq and most especially our beloved Syria," the Syrian-born patriarch wrote. "I continue to repeat my motto: give us peace and security, because that is the warranty and condition for Christian resistance, presence, role and witness."

Patriarch Laham urged the region’s Christians to stay in their homelands, stressing that "our presence here is of great, global and historical significance! We are not asked to sacrifice our families, though we must struggle to remain here despite dangers, difficulties and hardships."

"If Christians emigrate," Patriarch Laham added, "it is as though Christ were leaving his country and homeland."

From Baghdad, Iraq, Chaldean Patriarch Louis Sako, wrote: "Amidst the concerns and worries of Iraqis, Syrians, and people of the Middle East, in which children and civilians are victims of a harsh war, millions of persons are displaced from their homes, driven out of their lands and are living in tragic conditions, after the destruction of their towns’ infrastructure."