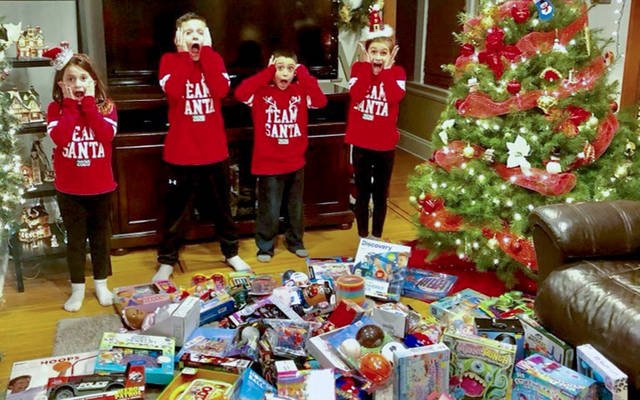 Gia Masters (from right) poses with the toys she was able to purchase with donated funds. With her is her brother, Mikey, and her cousins CJ and Sami Urban. (Photo courtesy of Luz Segnini)

A baby doll, a toy truck and a skateboard. Mr. Potato Head, Nerf toys and a giant rainbow-colored Slinky.

By mid-December, 9-year-old Gia Masters was very excited about the toys on her list.

On the surface, that doesn’t seem remarkable. After all, traditionally December is the month when children around the world spend hours crafting lists of toys they’d like Santa to bring to them.

Gia’s list, however, was not full of toys she was hoping to find under her family’s Christmas tree on Dec. 25. Instead, her list was a record of all the toys she, with help from her younger brother, Mikey, and their cousins, CJ and Sami Urban, had purchased for other children in Rochester. They sent the toys to work with Gia’s father, Mike Masters, who is an officer with the Rochester Police Department, and Masters and his colleagues handed them out to children they met through the course of their work.

“My dad gets a bag and he drives around and he gives them to people who need them, or even people who don’t need them. We just want to spread some Christmas cheer,” Gia told the Catholic Courier.

The toy giveaway was not the first foray into community service for this group of children, all of whom attend Holy Cross School in Charlotte. Last year they collected cans and bottles and used the money they got from redeeming the 5-cent deposits to purchase coloring books and other children’s items for UR Medicine’s Golisano Children’s Hospital, according to Gia and Mikey’s mother, Luz Segnini.

“This year we thought it would be a better idea to do something different because we found a slug in one of the cans when we were returning them, and that was just gross,” Segnini recalled with a laugh.

This year, the children decided to do chores around their house so they could each earn $20 or so, and use that money to buy toys for the children Masters meets while he’s on duty. Gia decided to make a video appeal to family members, asking if they’d like to contribute to the project, and one of those relatives posted the video on social media.

“Everybody saw it. Some people sent us money, and some people gave us some toys,” Gia explained.

Gia, Mikey, CJ and Sami took the money they’d collected and went on a shopping spree at Target and 5 Below.

“We picked out toys that we thought we might like, even though we were giving them to the kids,” she said. “When we laid all the toys out, I was so shocked and excited, because I couldn’t believe how many toys we got.”

The pandemic kept the cousins from helping Masters deliver the toys, so they’ve had to be content with the photos Masters has shown them of some of the children and their new playthings.

“I was so excited to see them, because I knew they were so happy. That made me happy, and that made the police officers happy as well,” Gia said.

Segnini and Masters are happy, too, and proud of all four of the children. They are all kind children, and regularly do things for others in their community, Segnini said. The kids recently made cards for nursing-home residents, and Sami also raised money to buy goodies and food for nurses at Rochester General Hospital. The family also had planned to make sandwiches for people at the House of Mercy around Christmastime, Segnini said.

“We try to always do things with them that help them understand that it makes other people happy when they do things like this,” she said. “We try to instill in them that they are very lucky, and they should give more than they take. We’re always trying to teach them that it’s a good feeling to make other people smile and be happy.”

Gia appears to have taken that message to heart, as she is “a ray of sunshine for everyone,” according to Annalise Stark, her fourth-grade teacher at Holy Cross.

“She is polite, kind and compassionate to all those around her. She is a friend to everyone in the classroom,” Stark said.

Gia’s classmates have been supportive of her efforts to help others in the community, and many of these children are involved in charitable works of their own, Segnini said.

“It’s just a testament to how the parents in this community are raising their kids, and how giving they are,” she remarked.