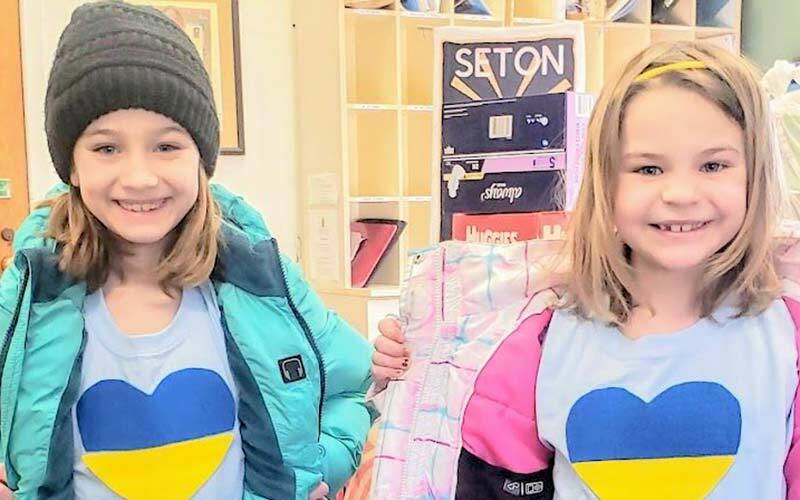 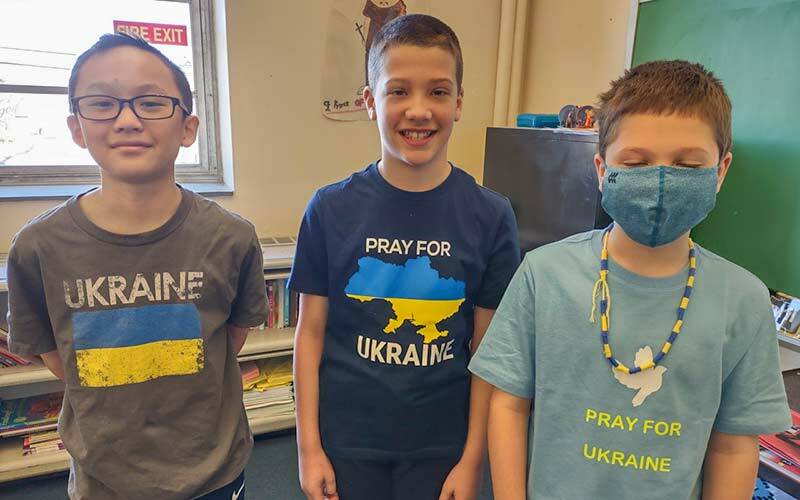 Raising more than $14,000 last month in a one-day fundraiser for Catholic Relief Services was just the tip of the iceberg in Catholic-school students’ efforts to aid Ukrainian refugees

Soon after Russia’s Feb. 24 invasion of Ukraine, students at Catholic schools throughout the Diocese of Rochester began wondering what they could do to support relief efforts. A group of fifth-graders at Brighton’s Seton Catholic School began making bracelets and selling them to fellow students during their lunch period. They quickly raised more than $150, according to Patricia Selig, Seton’s principal.

Students and their families also gathered supplies for ROC Maidan, the charitable arm of the Ukrainian Cultural Center of Rochester. The organization was collecting new socks, underwear, sleeping bags, medical gloves, diapers and baby wipes, toothbrushes and feminine-hygiene products for people in war-torn Ukraine. Over the course of one week, students and their families sent in enough donations to fill three minivans and a Jeep “from top to bottom and front to back,” Selig said.

The St. Rita School community also gathered three carloads full of donated items for ROC Maidan’s effort, according to Elizabeth Jensen, principal at the Webster school. A member of the school community is involved with the Ukrainian Cultural Center and spearheaded the quickly organized collection, and school families responded generously, Jensen said.

Supporting such charitable causes has a larger ripple effect than families may realize, Selig wrote in a March 11 note to parents.

“The compassion you are showing teaches and reinforces to your children the precious gift of selfless giving, and it is evident when they take the initiative to ask what else they can do to help,” she wrote.

Children at other schools have found ways to care for the emotional needs of the Ukrainian people. Students at St. Ambrose Academy made cards that were sent to the Ukrainian Cultural Center, noted Christine Deutsch, principal at the Rochester school. Students at St. Mary School in Canandaigua, meanwhile, drew and displayed colorful pictures of sunflowers — Ukraine’s national flower — as symbols of solidarity and hope for peace.

“Around it are praying hands with the background colors of the flag. The students wrote messages like, ‘We are praying for you,’ ‘God bless you’ and ‘God please help,’” Lacey said.

Students at several other schools, including St. Joseph School in Penfield and Seton Catholic School, have incorporated prayers for peace in Ukraine into their daily routines.

“We began using our morning prayer to pray for the people of Ukraine. Prayer is a powerful way help for any hard situation,” Selig said.

Tags: Catholic Schools, War in Ukraine
Copyright © 2022 Catholic Courier, Inc. All rights reserved. Linking is encouraged, but republishing or redistributing, including by framing or similar means, without the publisher's prior written permission is prohibited.