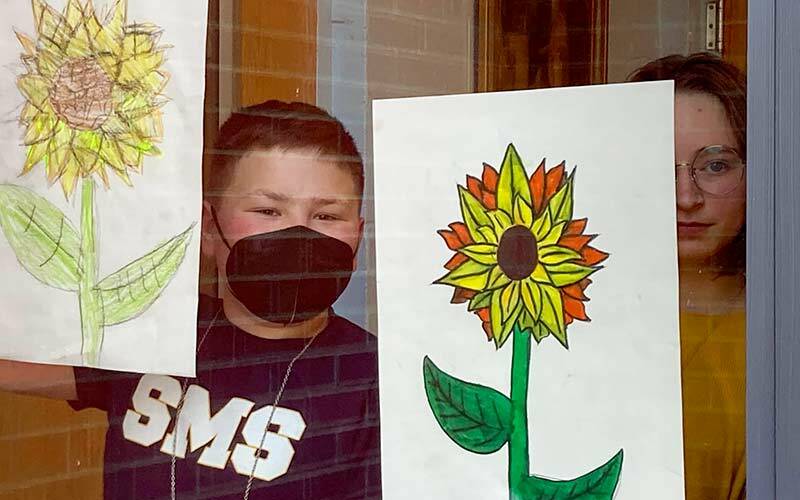 Hundreds of Catholic-school students around the Diocese of Rochester set aside their uniforms earlier this month in favor of donning blue and yellow apparel.

On March 4, the students showed their support for the people of Ukraine by wearing blue and yellow, the colors of Ukraine’s flag. In return for the privilege of dressing out of uniform, the students and their families made monetary donations to Catholic Relief Services and its efforts to help Ukrainian refugees.

The students raised more than $14,000, according to Christine Merle, coordinator of curriculum and instruction for the Diocese of Rochester’s Catholic schools. Schools were asked to send monetary donations directly to CRS but to tell Merle the total amount of each school’s donations so she could keep a running tally. Some schools did not provide that information to Merle, however, while other schools asked families to donate to CRS online rather than sending cash or checks into school, so the actual amount donated is likely closer to $15,000, she said.

All of the diocesan elementary schools participated in the fundraising effort, as did Nazareth Elementary School and Aquinas Institute in Rochester; McQuaid Jesuit High School and Our Lady of Mercy School for Young Women in Brighton; Bishop Kearney High School in Irondequoit; and Tyburn Academy of Mary Immaculate in Auburn. Students in all corners of the diocese responded enthusiastically to the appeal, Merle said. Students at Brighton’s Seton Catholic School, for example, raised $3,983, she said.

Mary Ann Lacey, principal at All Saints Academy in Corning, said she wasn’t surprised by the speed and generosity with which her students and those throughout the diocese responded to the appeal. Catholics are called to put their faith into action by serving others, and Catholic schools have an important role to play in this mission, she said.

“The pope stated that Catholic education gives soul to the world,” Lacey said. “It touches your heart when the students come with a smile on the face and tell you, ‘This is all my money, and I’m praying too.’”

Tags: Catholic Schools, War in Ukraine
Copyright © 2023 Rochester Catholic Press Association, Inc. All rights reserved. Linking is encouraged, but republishing or redistributing, including by framing or similar means, without the publisher's prior written permission is prohibited.