Catholic-school students study saints, teach others about them - Catholic Courier 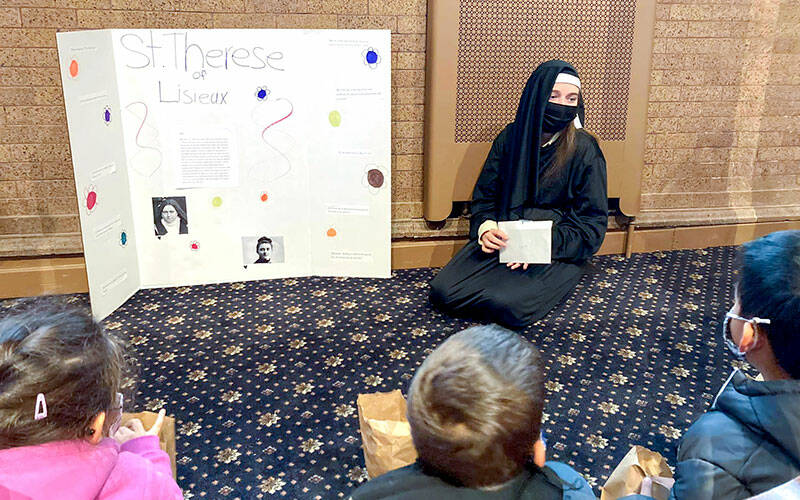 Addison Zubrzycki, a student at St. Mary School in Canandaigua, plays the part of St. Therese to teach younger students about the saint. (Photo courtesy of Lisa Milano)

In October, many of the students at both schools spent several weeks researching the lives of saints and preparing presentations on saints of their choosing. In early November, they dressed up as those saints and taught fellow students about them.

Sister Orman said she was impressed with the way her seventh- and eighth-grade students eagerly shared what they’d learned with St. Mary’s younger students.

“They were sharing about their faith and what they’ve learned. They don’t get that opportunity very often,” she noted.

When they’d started researching saints back in October, some of Sister Orman’s students had chosen saints whose feast days fell on their birthdays, and some had chosen saints who shared their names, while others chose saints who were the patrons of hobbies they enjoyed. Each student researched three saints before choosing one saint to focus on for the project.

“They put together a one-page, first-person narrative, so they had to talk as if they were the saint, and they made the trifold boards with their information on the saint,” she explained. “They always put a lot of effort into things, so I thought, ‘Why not be able to share that?’”

Sister Orman’s students prepared for a two-day All Saints’ Day Walk, which took place in St. Mary Church Nov. 1-2. On each of those days, half of her students dressed up as their chosen saints and spaced themselves out inside the church. The other half of the students acted as tour guides and ushered small groups of younger students from one saint to the next.

“At first they were really nervous, but then when you went around and listened, they were talking as if those saints were who they are. It was a great way for them to be able to share with others what they did,” Sister Orman said.

Presenting as her chosen saint — St. Gertrude of Nivelles — ended up being seventh-grader Maeve Jankowski’s favorite part of the whole project.

“I was really excited to have a chance to present to the younger kids and teach them about saints,” Maeve said. “I’ve always liked talking to younger kids. It’s always just funny to see their reactions and just help them learn.”

Choosing her saint’s costume was one of fellow seventh-grader Merrick Khan’s favorite parts of the project. Merrick’s chosen saint, St. Elizabeth Ann Seton, is one of several patron saints of seafarers, and she frequently is wearing a bonnet when she is depicted in paintings and sculptures.

“I did not possess a bonnet, but I did have a blue bucket hat with little anchors on it. She’s a patron of seafarers, so I thought it was really fitting,” Merrick explained.

As part of their presentations, Sister Orman’s students also were required to hand out something relevant to their saints. The student portraying St. Patrick, for example, gave out little coins, and the student depicting St. Joan of Arc gave out paper shields for the younger students to color, Sister Orman said.

“The younger kids really enjoyed it. Some of the parents mentioned that their kids came home and shared about it,” she said.

Students in the fifth, sixth and seventh grades at St. Francis-St. Stephen School, meanwhile, also taught their fellow students about their favorite saints. They spent a month researching their saints and preparing presentations, according to Pamela Kehoe, middle-school religion and Spanish teacher at the Geneva school. On All Saints’ Day, the students dressed up as their chosen saints, participated in a procession at Mass and then visited the school’s classrooms to talk about their saints.

“Our goal was for the students to pick a saint they could identify with or wanted to learn more about,” Kehoe explained. “We want them to know that it is very possible to be a saint, that we just have to trust God and stay close to him and his sacraments so we can know, love and serve him and be with him now and forever. Heaven is our goal, and the saints will help show us the way and pray for us.”

St. Francis-St. Stephen’s eighth-graders also produced a video about Blessed Carlo Acutis, who died in 2006 at the age of 15 and was beatified in October 2020. Preschoolers learned about St. Francis of Assisi, and kindergartners studied St. Therese of Lisieux, while students in the first through fourth grades studied saints and participated in service projects related to those saints.