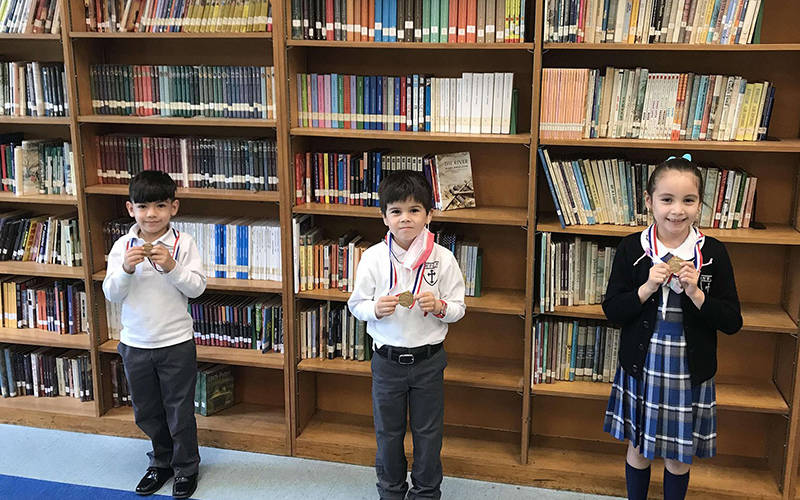 WASHINGTON (CNS) — In our modern, high-tech society, it turns out some students still have good penmanship. And the winners of this year’s Zaner-Bloser National Handwriting Contest, announced this May, have very good penmanship.

Students’ entries were judged by how they wrote: “The quick brown fox jumps over the lazy dog.”

That sentence has been the standard criteria in the educational company’s annual handwriting contest for the past 30 years because it contains every letter of the alphabet.

The judges examine the letters in each of these nine words carefully, eyeing the shape, size, spacing and slant to determine the best elementary school handwriting across the country.

Students in kindergarten through second grade submit manuscript or print entries in the contest, while students in grades three through eight submit cursive entries. They also were asked to answer, in their best penmanship, how their handwriting makes them a better reader and writer and why this is important.

To be in the contest, students first had to win best in their grade in their school’s handwriting contest. These winners advanced to state competitions and state winners moved on to the national competition, where judges selected nine grade-level national champions and nine semifinalists.

In this year’s contest, three students from Catholic schools won the grand national championship as the top writers for their grade level. The winners were: Rhys Acas, a kindergarten student at St. Thomas More Catholic School in Elgin, Illinois; Caitlyn Ngo, a fifth grader at St. Edmund Elementary School in Brooklyn, New York; and Soldae Givens, an eighth grader at St. Benedict the Moor School in Pittsburgh.

These winners received a trophy and $500 and their schools received a $1,000 Zaner-Bloser product voucher and a certificate of achievement handcrafted by Michael Sull, known as a master penman. Sull literally wrote the book on penmanship with his 2018 publication: “The Art of Cursive Penmanship.”

Zaner-Bloser is a Columbus, Ohio-based company that started as a penmanship school and now produces educational materials, including, of course, handwriting lessons.

In a time when handwriting almost seems a lost art, the students awarded for their perfect loops and curves would surely make the monks of the Middle Ages — known for copying manuscripts by hand — proud.

The contest itself also shows that more students are writing old school — with pen and paper — than one might think since more than 75,000 entries were submitted just this year. In a nod to technology, this year the entry forms could be submitted electronically.

This competition also shows that Catholic schools have kept the tradition of teaching cursive writing at a time when many public schools across the country have dropped this requirement.

“We have found that Catholic schools and Catholic school parents really put a high level of importance on foundational skills for their students,” she said, stressing that handwriting is one of these skills that is important for reading, writing and language.

The ability to write by hand is a life skill, she added, especially in this digital age.

She also said the talent is a form of artistic expression noting that “when children struggle to express themselves and find their voice, handwriting gives them an outlet.” She sees this in the answers students give in their contest entries; many say it is an art form and a way to express themselves.

Winners over the years have gone on to be artists or designers and also doctors, a surprising fact since doctors’ prescriptions are often described as illegible.

She said the school, which has often had a state winner in the contest, would have liked to honor their winning student during a school assembly. Due to COVID-19 protocols though, the school is not having assemblies this year and instead announced Caitlyn’s win on the public address system’s morning announcements after prayers.

D’Emic said handwriting is part of the school’s curriculum for students in kindergarten through sixth grade and she is a big advocate of it, saying studies have shown that it helps students develop cognitive thinking skills.

The students turn in papers the old-fashioned way to demonstrate their handwriting skills, but they also submit assignments electronically with Google Classroom and Google Docs.

“Technical skills are vital in the world they live in and they need to be proficient but there are also skills that we shouldn’t be neglecting as we focus on technology,” she told Catholic News Service May 25.

In Caitlyn’s contest entry, she said writing cursive helps her to read and write this style of writing. “It is also important for when you grow up,” she said.

The Brooklyn principal sees it fitting that Catholic schools in general continue to teach handwriting, calling it an example of our “philosophy and mission to provide a comprehensive education program.”

She said the schools want to prepare students for college and careers and “the more we offer them, the better prepared they are.” If students learn skills that other people won’t have, they’ll have an advantage, she added.

Plus, it makes points with grandparents.

Carmona said handwriting has recently had ebbs and flows but in the past few years she has seen a renewed interest in it. During the pandemic, for example, there was a resurgence in writing letters.

“It became a thing” she said, as young people realized their grandmothers would love to get handwritten notes.