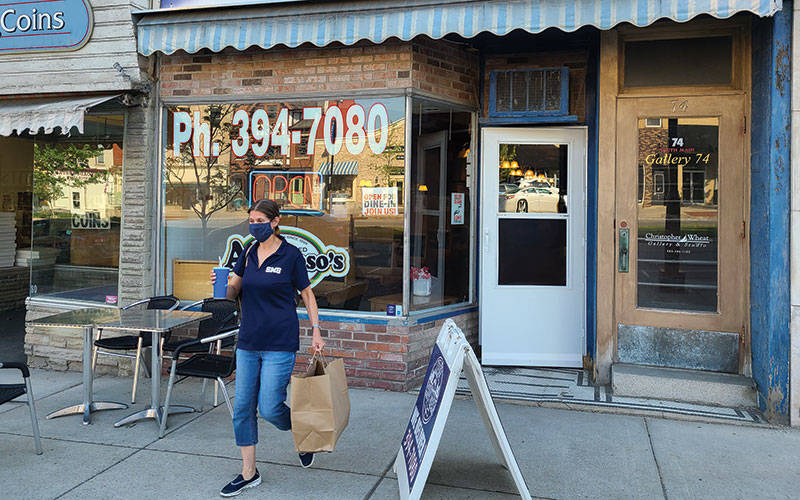 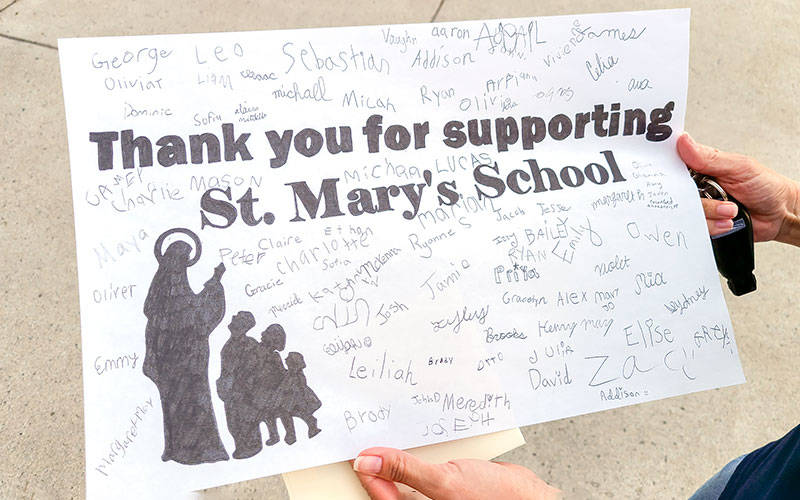 Parent-Teacher Organization member Kellie Parker holds up a poster signed by St. Mary School students that was given to Mac’s Philly Steaks on Main Street in Canandaigua as appreciation for a May 18 fundraiser to benefit the school. (Courier photo by Jeff Witherow)

In 2019 and early 2020, staff members and volunteers at Catholic schools in the Diocese of Rochester spent countless hours planning fundraisers for their schools, only to watch those plans fall apart as the coronavirus pandemic took hold in New York state and stretched on for months.

“It was very hard, especially when everything we had on the calendar had to start getting cancelled,” recalled Christine Deutsch, principal at Rochester’s St. Ambrose Academy.

Some fundraisers, especially those planned for outdoors late in the 2020-21 school year, were able to go on as planned, albeit with modifications. The annual golf tournament to benefit St. Mary Our Mother School in Horseheads, for example, took place June 6, but golfers wore masks whenever they could not maintain social distance and received their dinners in to-go boxes.

Other fundraisers had to be completely scrapped, but just as teachers rose to the challenge of educating students during a pandemic, staff members and volunteers also came up with new ways of fundraising while still respecting social-distancing requirements.

The community at St. Ambrose discovered a particularly sweet strategy when it began selling cookies made by a local bakery. Staff and volunteers had begun brainstorming new fundraising opportunities soon after it became evident that the school’s biggest pre-pandemic fundraisers — including an annual gala and twice-yearly Scholastic Book Fair — would not be possible under statewide restrictions on public gatherings. Fortunately, the school already had a working relationship with Baker Street Bakery, which is owned by parishioners of Peace of Christ Parish and had provided cookies for St. Ambrose events in the past, Deutsch said.

St. Ambrose, which is operated by Peace of Christ, partnered with the bakery to sell cut-out cookies near Christmastime, and the initiative was a resounding success, Deutsch said.

“It ended up being more profitable than we expected,” she said, noting that the school conducted a second cookie sale around Easter.

Based on the success of the two sales, the school will likely partner with the bakery in the future, although probably just once a year, Deutsch said.

“The best part for us was being able to help a small business in Rochester during the pandemic,” she added.

St. Mary School in Canandaigua also found success by partnering with local businesses, according to Kellie Parker, cochair of St. Mary’s Parent Teacher Organization. Last summer, her organization decided to take a new approach to fundraising, especially since two of its biggest events — a casino night and a meat raffle — could not take place during the pandemic.

“We decided, instead of selling wrapping paper that nobody really wants anyway, let’s support the community and have them, in turn, support us,” Parker explained.

The school partnered with at least one local, family-owned business per month beginning in August 2020. Members of the school community were encouraged to patronize each business on a designated day and to mention St. Mary School; in turn the businesses donated a portion of their proceeds to the school, she explained.

The first event took place at a local pizzeria, and so many people placed orders that night that the restaurant had to call in extra employees, Parker said.

“We had no idea how huge it was going to be. We ended up having over 400 orders,” Parker said.

After that night, participants in monthly events at restaurants were encouraged to order gift certificates, which allowed them to show financial support for both St. Mary School and the host restaurants without overwhelming the establishments, she explained. Several non-restaurant businesses, including a toy store, a garden nursery and a car wash, also partnered with the school.

By late May, this fundraising model had netted more than $15,000 for the school, Parker said.

“I feel like we kind of turned a page, and this is going to be our new form of fundraising,” she said.

St. Kateri School in Irondequoit also may permanently adopt changes it made to its main fundraiser, an annual walkathon, according to Principal Terri Morgan. The walkathon usually takes place on a school day in the fall on which students walk in class groups with their teachers. This school year, a large number of area COVID-19 cases during autumn prompted organizers to delay the walkathon until May. Reimagined as a Saturday family event, it also incorporated an online, silent auction, Morgan said.

The online auction was a nice feature because it enabled students’ out-of-town relatives to get involved, and the timing of the walkathon was nice because it wasn’t close to Christmas, Thanksgiving and competing fundraisers from other organizations, she added.

“We made a little bit more profit than we have in the past,” Morgan said. “We were thrilled with that, especially with COVID and people struggling.”