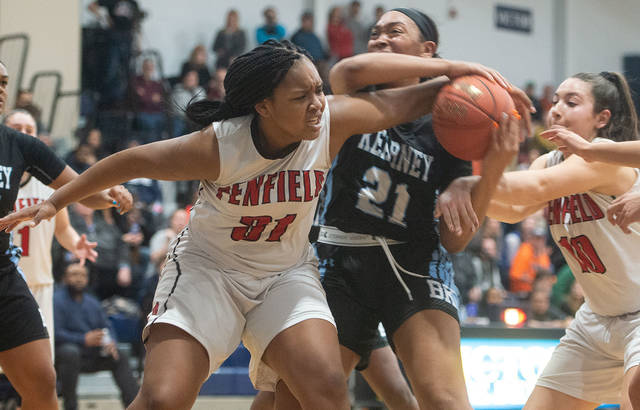 Bishop Kearney’s Saniaa Wilson (21) ties up with Penfield’s Nyara Simmons (31) and Jessica Rinere (10) for the ball in the second half of the Section 5 Class AA championship in Victor March 2. Bishop Kearney won 58-54. (Courier photo by John Haeger)

After winning Section 5 basketball titles a year ago, there was no letting up for the Bishop Kearney girls or McQuaid boys in 2018-19.

Both squads successfully defended their sectional crowns. The BK girls, seeded No. 2 in Section 5 Class AA, scored a 58-54 win over top-seeded Penfield in the championship contest March 2 en route to a state Final Four appearance. McQuaid, meanwhile, earned a Section 5 Class AA crown of its own as the No. 3 seed, winning 81-75 over No. 8 University Preparatory Charter School for Young Men in the title game March 2.

The Kings won a closely contested final against Penfield, leading 12-10, 26-23 and 38-36 at the quarter breaks. Saniaa Wilson led the way with 21 points and 13 rebounds, including a crucial basket in the final minute of play that broke a 54-54 tie with the Patriots. BK’s Marianna Freeman also had a big night, finishing with 16 points.

In earlier sectional games, Kearney won 77-45 over No. 7 Victor in quarterfinal play Feb. 21 as Lytoya Baker had 23 points. That was followed by a 72-38 triumph over No. 3 Edison Tech in semifinal action Feb. 27 behind 20 points each from Wilson and Baker.

In a state quarterfinal Class AA matchup on March 9, the Kings rolled to an 81-45 victory over Frontier of Section 6. Freeman topped BK with 21 points, followed by Baker with 20, Wilson with 15 and Emily Tytler with 12. Kearney led 16-13 after one quarter before turning the game into a rout with a 26-8 edge in the second quarter to take a 21-point halftime lead in earning its second consecutive berth in the state Final Four.

BK’s season finally came to a close March 16 with a 59-45 state semifinal loss to West Genesee of Section 3. The Kings trailed 25-20 at halftime, but any hope of a second-half comeback was thwarted by a 17-5 deficit in the third quarter that put them behind by 17 points heading into the final period. Freeman led BK with 14 points and Taylor Norris added 10 as the team finished its 2018-19 season with a record of 22-2.

McQuaid led UPrep 42-37 at the half in the Section 5 final and upped its advantage to 11 points before the eighth-seeded Griffins rallied to tie the game midway through the fourth quarter. However, the Knights put together a decisive 10-2 run to come out on top in a rematch of last year’s Class AA championship game, also won by McQuaid. The Knights’ title win was fueled by huge scoring efforts from Jermaine Taggart, who finished with 27 points, and Kobe Long, who totaled 24.

Earlier in sectionals, McQuaid started out with an 87-56 quarterfinal win over No. 11 Victor Feb. 22 as Long scored 24 points. That was followed by an 82-75 victory over No. 2 Gates-Chili Feb. 26, with Taggart and Long compiling 26 and 25 points, respectively.

McQuaid’s season was brought to an end March 9 by Niagara Falls of Section 6, 84-71, in a state Class AA quarterfinal contest. The game was knotted 34-34 at the half, but the Wolverines broke things open with a 16-3 run beginning late in the third quarter. Long led McQuaid with 20 points and Taggart had 14 as the Knights ended up with an 18-5 record.