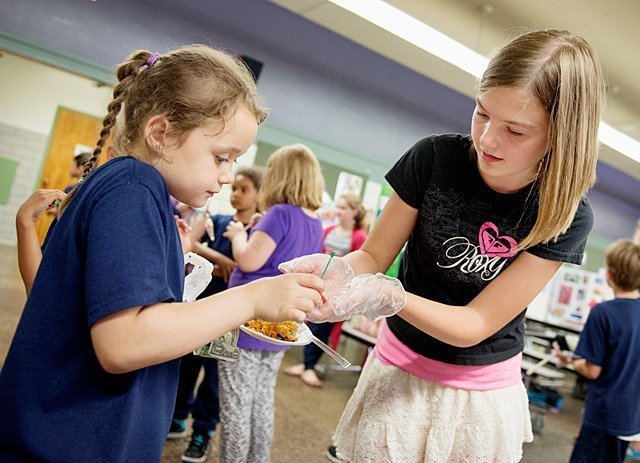 Sixth-grader Danielle Stein (right) hands a crepe to second-grader Eva Meddaugh during a June 13 'World Bazaar' at Holy Cross School in Rochester. The diocesan Department of Catholic Schools is spreading the word about local Catholic schools in new ways.

Anthony S. Cook III, superintendent of the Diocese of Rochester’s Catholic schools since 2013, knows parents of newly baptized children were probably surprised to find letters from him in their mailboxes this past March. Although many of those children are still wearing diapers, Cook believes it’s never too early for their parents to start thinking about Catholic education.

Cook used his March 17 letter to formally welcome newly baptized children and their parents to the Catholic Church in the Diocese of Rochester and open the door to further communication between parents and the diocesan Department of Catholic Schools.

"As the first catechists of your child, the diocese welcomes and values your role in their future education of faith and life. Please know I intend to keep you and your child in my daily prayers as they develop their own personal devotion to Christ, the first Teacher," Cook wrote. "The purpose of this letter is to embrace you and your child as members of the Roman Catholic Church and to provide forthcoming ways to support your efforts in nurturing your child in the Catholic faith."

Cook’s letter is just one of several new ways the diocesan Department of Catholic Schools is trying to spread the word about local Catholic schools. The diocese also has developed radio, television and Internet commercials, some of which feature a mother explaining why she and her husband — both Catholic-school graduates themselves — chose to send their children to a Catholic school. Cook hopes other parents will be able to identify with this mother’s experiences.

"I think the personal connections are what’s most effective. We’re looking at ways we can more effectively engage, especially with Catholics," he said.

Cook’s letter also is a way of engaging families who are Catholic but may not be familiar with the Catholic schools in their area. In the letter, Cook indicated that in the future he’d be sending more information about Catholic schools and religious education, and provided an e-mail address at which parents could contact him if they wished to opt out of such communications. No one has opted out thus far, Cook said, and his office is preparing to send another batch of letters to the parents of children who’ve been baptized since March.

Also included in the March letter was a listing of the 20 diocesan schools and their contact information, as well as messages Cook and Bishop Salvatore R. Matano had written to commemorate Catholic Schools Week, which had just been celebrated Jan. 26-Feb. 1. Similar packets of information also were sent to real-estate agents who may be working with families moving into the area, and to diocesan parishes for inclusion in welcome packets for new parishioners.

"I think just making that connection is very important. I think it’s so important for us to appeal to Catholics for Catholic education," Cook told the Catholic Courier.

Such appeals, however, are not limited to the Catholic community, Cook noted. The diocesan schools office currently is working with Penfield-based Mason Marketing to put together focus groups designed to shed light on some of the factors parents consider when deciding where to send their children. One of these groups will be made up of parents who decided not to send their children to Catholic schools, and another will consist of parents whose children are toddlers, as these parents soon will soon be deciding where to enroll their children, Cook said.

Diocesan schools also are hoping to entice parents through open houses being presented this fall. School open houses typically are conducted in January during Catholic Schools Week and right before the registration process begins, but presenting open houses in the fall will allow families to visit the schools earlier in the decision-making process, Cook said. Visits from parents of prospective students are not limited to open-house days, however, and parents always are free to call and schedule individual visits at the schools they’re interested in.

"Every day is ‘Visit a Catholic school day,’ as it says on our website," Cook said.