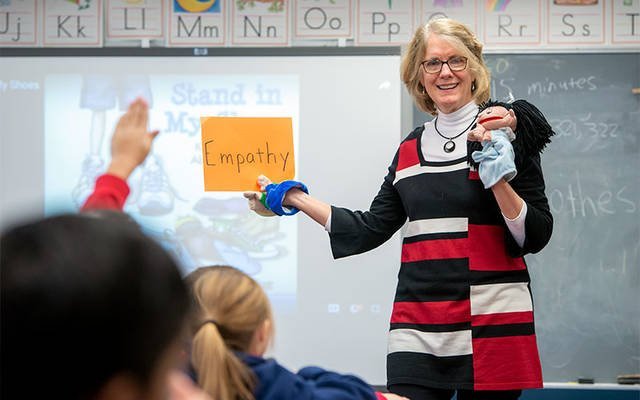 Ginny Riedman, the school counselor at St. Lawrence School in Greece, leads the second-grade class in a lesson on empathy Dec. 16. (Courier photo by Jeff Witherow)

At Greece’s St. Lawrence School this past Dec. 16, second-graders learned about empathy — a term defined by one student as “when you know how somebody else feels.” They were asked to imagine a wheelchair-bound child unable to take part in recess, or a peer who is picked last for a sports team. What might those folks be feeling? How could you make them feel better?

Elsewhere in northwest Monroe County, a fall course for sixth-graders at Holy Cross School in Rochester/Charlotte stressed making positive connections when meeting people and conversing with them.

None of the above-mentioned priorities involve the three Rs of education — “reading, writing and ‘rithmetic.” Even so, the students’ instructors emphasized the value of building life skills into their curriculum.

“If they’re hearing about these things at a young age, and we consistently do them year after year, our hope is that they’re internalizing the message,” said Ginny Riedman, school counselor at St. Lawrence.

Riedman conducts weekly character-education classes for kindergarten through fifth grade, tailoring lessons to each grade level and addressing such topics as problem-solving, self-esteem, social skills and respect for others. A top objective is for students to identify their feelings and develop language to express themselves respectfully, as opposed to lashing out when peers do something upsetting, such as accidentally bumping into them.

Meanwhile, during the Dec. 16 session on empathy, second-graders brainstormed ways to help other youths who feel left out, saying they would invite those youths to play and include them in other activities.

Treating others well also has been a priority for the sixth-grade class at Holy Cross, thanks to a first-time course based on Dale Carnegie’s well-known 1936 book How to Win Friends and Influence People. The six-session series, which ended Nov. 15, was taught by Lauren Bates, the school’s sixth-grade teacher; and Doug Escher and Ed DiPonzio, members of Holy Cross Parish who serve as owner and operations manager, respectively, of the Dale Carnegie training center in Rochester, which offered the course at no charge.

Lessons delved into such areas as smiling, shaking hands and making eye contact when introducing one’s self; remembering that person’s name; speaking kindly rather than negatively; expressing genuine interest in the other person; being a good listener; effectively handling disagreements; and making the other person feel important.

“You want to ask the other person questions; you don’t want to just talk about your day. You could find out a lot about a person,” said Leia Lewis, a Holy Cross sixth-grader, adding that the course helped her appreciate how showing interest in others “could make them feel really good.”

Leia added that the Dale Carnegie sessions have helped her become more adept at conversing with people, including those she doesn’t know well.

“At first it was a little uncomfortable, but over time it got easier. Now it’s not hard at all,” she said.

Not only can students such as Leia put their newfound skills to immediate use, but Bates observed that those skills can carry into adulthood as well, potentially resurfacing during such key moments as job interviews.

“We said on graduation day (for the course) that they probably don’t realize the gift they’ve been given. But seeds have been planted,” Bates remarked.

Another plus about teaching life skills, Riedman noted, is that doing so serves as a natural extension of Catholic education.

“This kind of goes in with how our Catholic faith instructs us to live our lives,” she said. “You can bring in some of the Catholic values, like treating others the way you would want to be treated.”