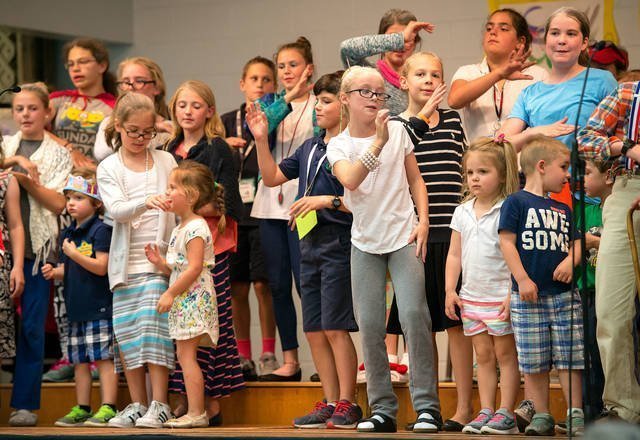 Students at St. Louis School in Pittsford perform the final song of the musical “Off Their Rockers” in the school gym June 13. Courier photo by Jeff Witherow

Fifth-grader Emmaline Dowd, meanwhile, stood near the front of St. Agnes Church in Avon last January and gave a speech in front of all of her fellow parishioners.

Neither girl was silenced by nerves, even though both were shy and quiet just a few years ago, according to their mothers. What’s more, both girls believe their lack of anxiety was due to their experiences at Catholic schools.

Ellie had been singing and acting in class plays at St. Rita School each year from the time she was in first grade until she graduated from the Webster school’s fifth grade in 2016. And for years Emmaline had been performing in St. Agnes School’s annual talent show and occasionally proclaimed the readings during the school’s weekly Masses.

“I learned from my experiences at St. Rita’s, and I used the experiences I had to help me in middle school,” Ellie explained.

It’s no coincidence that Ellie and Emmaline each had experiences at their respective schools that boosted their self-confidence and enabled them to overcome their initial anxiety about speaking, singing or acting in front of others. Many local Catholic schools incorporate a variety of experiences intended to foster the development of students’ public-speaking skills, according to Mary Ellen Wagner, principal at St. Rita School.

“They’re integrated within our lessons and activities. We’re trying to develop those skills from an early age,” she explained. “Kids are a little more fearless and open to new experiences than adults, so they tend to do very well, and they just gain that confidence each and every year.”

Every student at St. Rita School participates in a play each year, Wagner said. Two classes work together to put on each play, with the students from the younger grade singing in the chorus and the students from the older grade taking the speaking parts. Students also take turns leading schoolwide morning prayer over St. Rita’s public-address system, and at school assemblies they take the microphone and explain upcoming service projects to their peers and enlist their participation, Wagner said. Even an honor such as being named Student of the Week comes with a public-speaking component, as the students selected are required to tell their fellow students a little bit about themselves, she added.

Students at St. Michael School in Penn Yan also take turns leading schoolwide morning prayer, according to Principal Tom Flood. And every third Thursday of the month, Flood takes a group of students to the studio of WFLR Finger Lakes Country, where they are the stars of a half-hour radio show called St. Mike’s On the Mic. After Flood provides a brief update on happenings at the Penn Yan school, he turns the microphone over to the students.

“Sometimes we take three or four kids, sometimes we take a whole class, and we’ve taken the band and chorus,” Flood explained. “We had our second-graders last year talk about what they’re doing in technology class. It’s just a good experience for the kids. They love it.”

Students don’t have to be behind a microphone in order to learn how to conduct themselves in public, however. Emmaline’s mother, Elizabeth Dowd, said the principal at St. Agnes School, for example, greets students with a handshake as they arrive at school, and this teaches even the youngest students how to make eye contact while talking with adults. This is a useful skill, even for other adults, Flood noted.

“There’s not too many jobs where you don’t have to look a person in the eye and talk to them,” said Flood, who noted that where public speaking is concerned, confidence comes with experience. “You don’t get up one morning being able to speak in front of people.”

“I think (students) acquire a certain poise and a command of public speaking the more they do it,” Wagner added. “I think they’re seen in a very positive light by their peers because they are able to communicate so well and look comfortable doing it.”

Wagner said she’s had alumni tell her they’ve earned lead roles in school productions or been elected as high-school class officers because their experiences at St. Rita prepared them to speak confidently in front of others. This confidence often carries over into other aspects of their lives as they realize they’re capable of more than they initially thought, Wagner said.