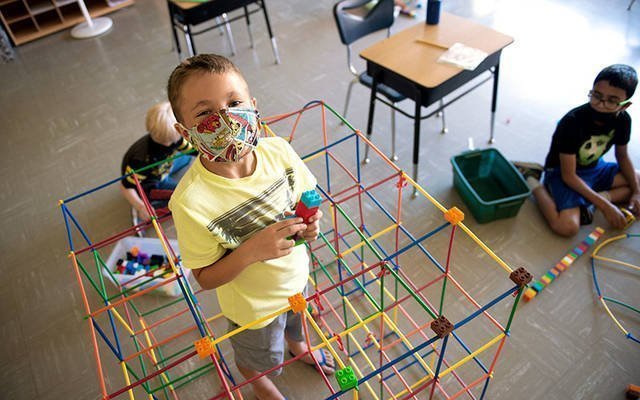 Taylor Tisdale stands inside the tower he constructed July 15 during a summer program at All Saints Academy in Corning. (Courier photo by Jeff Witherow)

Educators have long known about the phenomenon called the “summer slide,” the academic loss children experience during summer breaks from school, forcing teachers to spend time each fall reviewing material students had learned the previous year.

This year, the likelihood of academic loss also has been weighing on the minds of parents, according to Amy Johnson, principal at St. Joseph School in Penfield.

“We do have a number of families who are concerned that their child is behind,” Johnson said.

The parents’ concern stems from the fact that their children haven’t actually set foot inside their classrooms since mid-March, when the coronavirus pandemic forced students throughout the nation to finish the 2019-20 school year via distance learning.

Their concern is not necessarily unfounded, agreed Johnson and Christine Deutsch, principal at St. Ambrose Academy in Rochester. St. Ambrose Academy’s faculty and staff explained the phenomenon in a brochure mailed to school families in July.

“Children who don’t read over the summer can lose up to three months of reading process. That loss has a cumulative, long-term effect. ‚Ä¶ Over time, these lost months add up to years. By the end of fifth grade, students who don’t read during the summer fall nearly two years behind those who do,” according to the information provided by St. Ambrose Academy.

Some scholars have wondered whether prolonged periods of distance learning might have a similar effect on students.

“There is much uncertainty about whether virtual instruction, even when well-implemented, is likely to be as effective as traditional, face-to-face instruction,” according to the recent findings of a group of researchers from the Annenberg Institute at Brown University.

In May these researchers published a paper projecting the effects of coronavirus-induced school closures on student learning and test scores, using existing research on the effects of summer breaks as well as school closures due to such unexpected circumstances as weather or natural disasters. Based on their research, the scholars anticipated that students may be “substantially behind” in the fall, especially in mathematics, and that students are likely to come into the school year with more than the usual variability in their academic skills.

Fortunately, local educators and parents are taking steps to mitigate the potential consequences of students’ time away from school last spring. In the family brochure explaining the summer slide, for example, St. Ambrose Academy’s teachers also outlined the school’s new summer reading program, which includes book suggestions and bingo boards with related activities, according to Deutsch.

“The idea is to read a book and complete one of the activities on the board. After completing three to four books throughout the summer, the student would have completed enough activities to get bingo,” Deutsch said.

Teachers at St. Joseph School, meanwhile, suggested to parents several educational websites to help their children keep learning over the summer, Johnson said. Companies that provided some of the online resources used by students during the spring semester have made those resources available to students throughout the summer at no charge, she noted.

Erica Stoutenburg said her daughters, who attend St. Joseph School, have been taking advantage of some of these online resources throughout the summer.

“Online programs are more motivating to my girls to do skills practice than a worksheet might be. The fact that they are already familiar with the program allows them to be independent to log on and practice at my prompting or their own interest ,” said Stoutenberg, noting that she and her husband are helping their daughters hone their math and science skills through such practical activities as baking and tending a garden.

In Corning, nearly 30 students took advantage of All Saints Academy‘s summer program, which offered half- or full-day instruction and other activities related to weekly themes. The students wore masks, maintained social-distancing requirements and stayed in cohorts, or groups, of their peers, noted TJ Verzillo, who was All Saints principal until mid-July, when he became principal at Holy Cross School in Charlotte.

“We’re hoping to eliminate some of that summer loss by providing that structure and giving them a chance to be around kids their own age,” he said.

Even if students do lose some academic ground over the summer, there is no reason for parents to worry, noted Johnson. Teachers are used to assessing students each fall and throughout the year to gauge where they’re at, she said, and this fall will be no different.

“We’re going to get through this,” she said. “My message to everyone is, ‘The teachers have this.’”