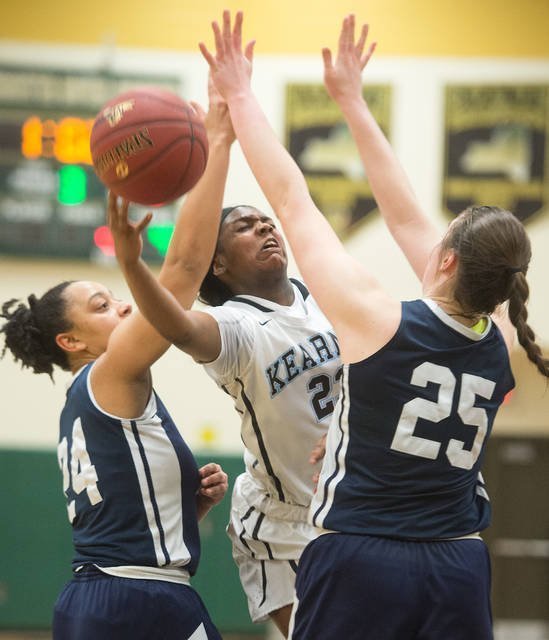 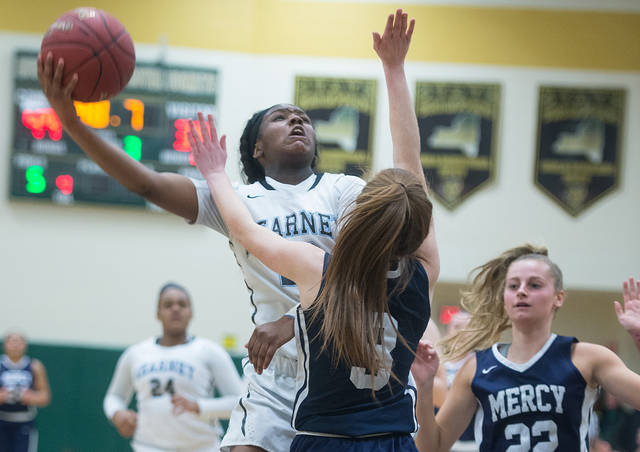 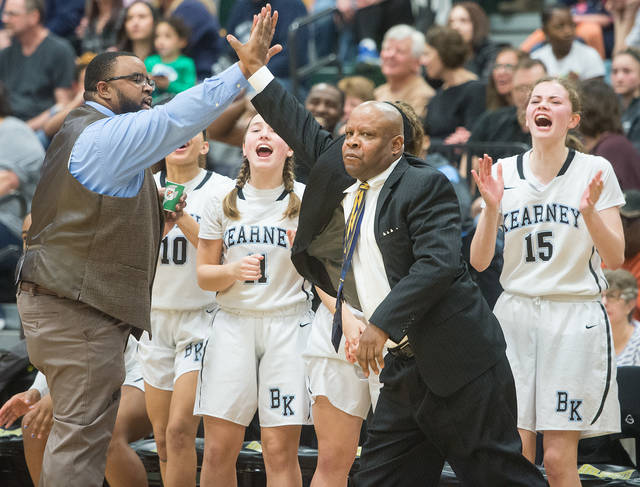 Bishop Kearney coaches and players react to a play in the fourth quarter of the Section 5 Class AA sectional championship game March 3.

With three sectional basketball crowns, as well as another in indoor track, Catholic high schools in the diocese were in top form during the recently concluded winter sports season.

Bishop Kearney won the Section 5 Class AA girls’ basketball title, scoring a 63-58 victory over Our Lady of Mercy in the championship contest played March 3. Kearney went on to reach the state Final Four before its season came to a close.

Also earning a Section 5 Class AA crown were the McQuaid Jesuit boys, thanks to their 70-54 win over University Preparatory Charter School for Young Men in the March 3 final — the Knights’ first sectional title in 15 years. They also advanced to the state semifinals.

And in girls’ track, Our Lady of Mercy topped the field at the Section 5 Class B championship meet Feb. 16.

Third-seeded Kearney was up 33-31 at halftime of its sectional title game and increased its lead to as many as 12 points. However, No. 5 Mercy closed to within two points midway through the fourth quarter before the Kings were able to hold on. Saniaa Wilson led BK with 19 points and 14 rebounds while Marianna Freeman (11 points), Lytoya Baker (10) and Allure Simmons (10) scored in double figures as well. This marked the fourth straight year that the two Catholic schools have met in a sectional final (BK prevailed in 2015 and Mercy in 2016 and 2017.)

BK went on to win its state quarterfinal contest over Orchard Park of Section 6, 58-39, in a game played March 10. The Kings only led the Quakers by two points at halftime but pulled away behind Wilson, who finished with 18 points; Freeman, with 17; and Baker, 13.

Kearney finally met its match March 17 in a 65-49 state semifinal loss to Baldwin of Section 8, the eventual champion. BK led the Bruins early but faced a 38-23 halftime deficit from which it could not recover. Wilson finished with 16 points and Baker added 13.

Earlier in its post-season, BK won 61-46 over No. 6 Edison Tech in sectional quarterfinal play Feb. 24, as the Kings held the Inventors scoreless over the final three minutes to pull away. That was followed by a 76-39 rout of No. 2 Webster Thomas in semifinal action Feb. 28 as Wilson poured in 23 points and Simmons totaled 20.

The fifth-seeded Knights broke open a close sectional title game against No. 6 UPrep beginning late in the third quarter, using a 14-1 run to take a 19-point lead over the Griffins. Anthony Iglesia was McQuaid’s top scorer with 18 points as four Knights finished in double figures.

McQuaid then earned a spot in the state Final Four with a 65-57 Class AA quarterfinal win March 10 over Niagara Falls of Section 6. The Knights built a 14-point lead late in the third quarter and held off a late rally that saw the Wolverines pull to within three midway through the fourth quarter. Jermaine Taggart scored 25 points and Iglesia finished with 16 as McQuaid won for the 13th time in 14 games.

The Knights saw their season end with an 82-66 loss to Half Hollow Hills East of Section 11 in the state semifinals March 17. McQuaid trailed by seven points at halftime, then surrendered the next 13 points to the Thunderbirds as the game fell out of reach. Iglesia led McQuaid with 21 points, followed by 16 from Taggart.

In top-seeded Aquinas’ title-game win over No. 2 Honeoye Falls-Lima, the Little Irish erased a 22-21 halftime deficit, took a 10-point lead and held off a late Cougar rally. Kayla Jackson led her team with 22 points, and AQ teammate Chanel Alexander added 14.

Prior the sectional final, Aquinas won 77-48 over No. 8 East in quarterfinal play Feb. 23, as Jackson totaled 30 points and 18 rebounds; and 77-36 over No. 4 Pittsford Sutherland in semifinal action Feb. 27, with Alexander totaling 19 points.

The Irish saw their season come to a close with a 55-30 loss to Pittsford Mendon in the state Class A qualifier game played March 6. Jackson and Nia Williams-Mathews led Aquinas with 10 points each as their team finished with a 17-7 record.

Leading the Monarchs to their sectional team title were Shannon Trevor, who took first place in Class B in both the 1,000-meter run and the 1,500 meters; Meredith McGee, who claimed the top spot in both the shot put and weight throw; and the 3,200 relay, which also placed first. The Monarchs finished with 111 points while second-place Pittsford Mendon had 79.

Trevor went on to further success at the Section 5 Meet of Champions Feb. 23, placing first in the 1,500.

‚Ä¢ In girls’ bowling, Bishop Kearney’s Christina Aldridge threw the high game of 238 and teammate Abbey Sarmiento had the top series of 1,095 en route to a second-place team finish at the Section 5 Class D championships Feb. 13.