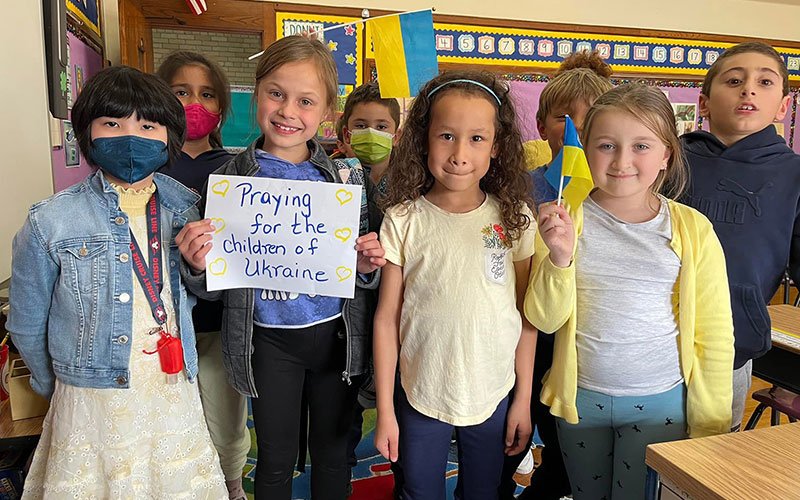 PERTH AMBOY, N.J. (CNS) — When students and faculty members at two Perth Amboy Catholic schools gathered together in a prayerful response to the humanitarian crisis unfolding in Ukraine, they were unified by their prayers and faith, and their city.

The blue and yellow ribbons on the students’ school uniforms proudly displayed the colors of the Ukrainian flag.

With Bishop James F. Checchio of Metuchen present and Father Ivan Turyk, pastor of the Ukrainian Catholic Church of the Assumption of the Blessed Virgin Mary, presiding, the students from Assumption Ukrainian Catholic School and the Latin-rite Perth Amboy Catholic School stood by side at a March 3 Divine Liturgy celebrated at Father Turyk’s church and prayed for peace in Ukraine.

“We have certainly been through a tough period,” Bishop Checchio said, addressing the students from beneath the shimmering gold dome of the church.

“First, the pandemic turned everything upside down and caused great suffering and loss. Now, on top of that, we have this aggression in Ukraine,” he said. “It is heartbreaking to watch the news and to see what is happening there, as we watch mothers and children fleeing and becoming refugees, and as we watch young men and even older men taking up arms to protect their family and their homeland.”

Solemnly acknowledging the struggles caused by the pandemic and the challenges Ukraine is facing, Bishop Checchio reminded the students that one thing never changes, even amid the difficulties in life: our friendship with Jesus Christ.

“The Holy Spirit was sent to be present with us until the end of time, and the presence of Jesus in the Eucharist nourishes us, strengthens us, and fortifies us for the challenges that we do face, so do not ever take it for granted. Remind yourself each day of the presence of our loving God with us,” said the bishop.

The March 3 Divine Liturgy came a week after Russia’s invasion of Ukraine. In the days that followed, more than a million refugees from Ukraine crossed borders into neighboring countries, and as of March 11, that number had multiplied to over 2.5 million, according to the U.N. High Commissioner for Refugees.

Many also have been displaced inside their country as Russian air attacks have devastated a number of cities.

The UNHCR, which has been tracking civilian casualties, said that to date at least 549 civilians have been killed and another 957 wounded.

In some areas, local officials put the civilian death toll much higher but news outlets report the numbers are hard to verify. In Mariupol, Ukraine — the target of relentless shelling — a mayoral official claimed 1,300 people have been killed and that at least 3,000 more have been injured.

“On behalf of the Diocese of Metuchen, we are united with you at this time and with the people of Ukraine,” Bishop Checchio said, speaking to Father Turyk, the religious sisters, and the many students and faculty members who have family and friends still in Ukraine.

“We are united in prayer, and we are storming heaven for peace in Ukraine,” he said.

In the Diocese of Brooklyn, New York, students at St. Mark Catholic Academy sent their love and prayers to the children of Ukraine and held a special “dress-down” fundraiser March 7.

The school raised over $2,000 for Voices of Children, an organization that provides psychological and psychosocial support for