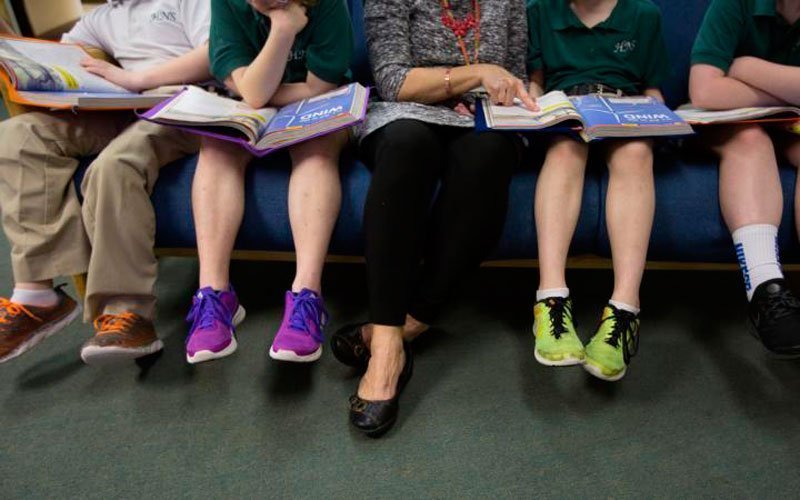 “Young people today need Catholic education more than ever,” said Bishop Michael C. Barber of Oakland, California, chairman of the U.S. Conference of Catholic Bishops Committee on Catholic Education. He also stressed that “being rooted in faith does not endanger the academic quality of Catholic schools, but in fact is their very motivation for excellence in all things.”

In a statement released for the observance, he said: “Following Christ’s example of loving and serving all people, Catholic schools proudly provide a well-rounded education to disadvantaged families, new arrivals to America and to all who seek a seat in our schools. Since the inception of Catholic schools in our country, we have always sought to welcome families of all backgrounds while maintaining our principles and teaching in a spirit of charity.”

Nearly 1.8 million students are currently educated in 6,352 Catholic schools in the United States.

Since 1974, National Catholic Schools Week has been the annual celebration of Catholic education in the United States, sponsored by the National Catholic Educational Association and the USCCB’s Secretariat of Catholic Education. Schools typically observe the annual weeklong celebration with Masses, open houses and other activities for students, families, parishioners and community members.

For the second year, the NCEA will lead an online campaign called the “Many Gifts, One Nation: A Day of Giving to Catholic Schools” Jan. 29 to Jan. 30 with FACTS Management Co., which helps with tuition management at schools. The 24-hour period, which begins at noon (EST) Jan. 29 is one way to support development programs in Catholic schools throughout the country.

Last year, more than $850,000 was donated to 539 participating Catholic schools, six dioceses and the NCEA. Information about the campaign is available at www.ncea.org/csw/manygifts.

During the week, Catholic schools plan to share their Catholic Schools Week celebrations on social media using #CSW19. The NCEA and the USCCB education secretariat also will highlight Catholic education’s strengths, successes and stories on their Twitter profiles: @NCEATalk and @USCCBCatholicEd.

Tags: Catholic Schools
Copyright © 2022 Catholic News Service, Inc. All rights reserved. Linking is encouraged, but republishing or redistributing, including by framing or similar means, without the publisher's prior written permission is prohibited.