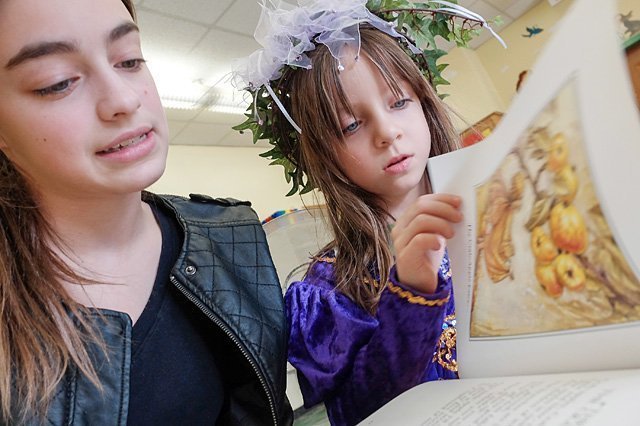 Students at Catholic schools in the Finger Lakes region recently showed their pride in their schools by doing such diverse activities as wearing crazy socks and hats, participating in Mass and playing games with nursing-home residents.

These were just a few of the activities Catholic schools held to commemorate Catholic Schools Week, which has been held in late January and early February for the past 43 years. More than 6,500 Catholic schools throughout the nation took part in this year’s celebration, including St. Mary School in Canandaigua, St. Francis-St. Stephen School in Geneva, St. Michael School in Penn Yan, St. Joseph School in Auburn and Tyburn Academy of Mary Immaculate, also in Auburn.

"Catholic Schools Week shines a spotlight on educators and our faith communities to celebrate Catholic-school education as a great gift to our church, our parish communities, our neighborhood communities and the nation," Burnford said.

Faith, knowledge and service played a big role in schools’ celebrations. Students from Catholic schools throughout the diocese traveled to Sacred Heart Cathedral in Rochester on Feb. 1 to participate in a special Mass with Bishop Salvatore R. Matano. Students from St. Mary School opened the week with a prayer service in the school gymnasium on Jan. 30. Students from St. Michael and St. Francis-St. Stephen Schools, meanwhile, wound down the week by participating in their own school Masses on Feb. 3.

Several of the schools’ activities focused on the knowledge component of the 2017 Catholic Schools Week theme. St. Francis-St. Stephen School, for example, held a Scholastic book fair from Jan. 29 through Feb. 3 in the school’s library. The event helped raise funds for the school while at the same time helping students to develop a love of reading.

"Literacy is the key to all academic success and owning their own books helps to promote students’ love of reading," according to Mary Mantelli, principal at St. Francis-St. Stephen.

Service activities also were a big part of the local Catholic Schools Week celebrations. Students from St. Joseph School and Tyburn Academy collected items for the Pregnancy Care Center of Cayuga County and delivered them to the center. Students from Tyburn Academy visited a local nursing home and played games with the residents, while students from St. Francis-St. Stephen School collected canned goods for the needy on their Soup-er Super Bowl Day on Feb. 2.

The Catholic Schools Week schedules had a healthy dose of fun sprinkled in as well. Seventh- and eighth-graders from both St. Mary and St. Francis-St. Stephen schools participated in their school’s respective annual volleyball games. St. Mary students went ice skating at the Canandaigua Civic Center on Feb. 2, and that day St. Michael students had an indoor beach party. Students at St. Francis-St. Stephen School invited some of their favorite people to enjoy an ice cream social with them at the school on Jan. 31, and on Feb. 1 students in the younger grades took part in field-day activities planned by the seventh- and eighth-graders. Students throughout the school also wore silly hats and socks on Feb. 1, and dressed up as their favorite book characters on Jan. 30.