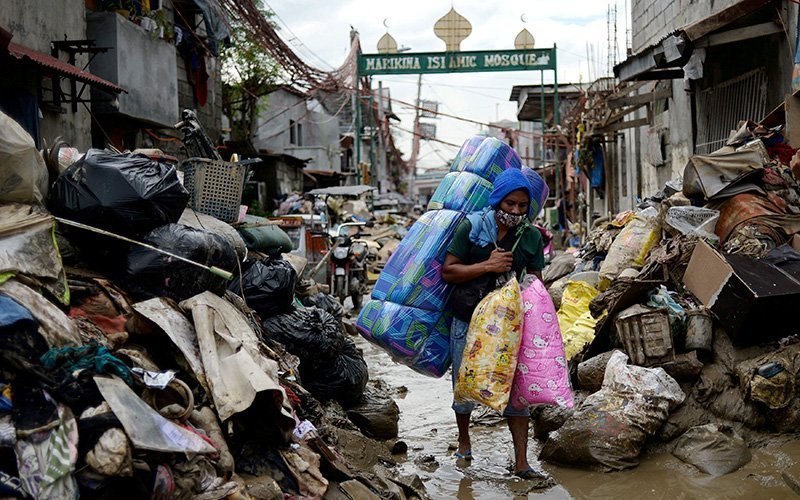 A resident carries his belongings through mud and debris in Manila, Philippines, Nov. 14, 2020, after flooding caused by Typhoon Vamco. (CNS photo by Eloisa Lopez, Reuters)

This is the first of a seven-part series on Catholic social teaching. This package focuses on the life and dignity of the human person.

A first principle of Catholic social teaching focuses on the life and dignity of the human person, which is fitting because it mirrors some of the first words and key concepts presented in the Bible.

In the first chapter of the Book of Genesis we read: “God created mankind in his image; in the image of God he created them; male and female he created them. God blessed them” (1:27).

This principle clearly is a foundation stone for the Jewish and Christian faiths.

The Merriam-Webster Dictionary defines the word “dignity” as being “the quality or state of being worthy, honored or esteemed.” The original Latin, English and French words for “dignity” focused on high status or the esteem people merited by their actions. Thus the word “dignitary,” meaning a high government or church official.

But it is the Bible’s insistence that all of humanity is made in God’s image and likeness that sets the standard for what we mean by human dignity today. We cannot earn dignity by anything we do. Rather, dignity is bestowed on us because “in the image of God he created them; male and female.” Thus, the Bible sets an entirely new standard by which we judge the value of others.

As the U.S. Catholic bishops’ Office of Justice, Peace and Human Development wrote: “We believe that every person is precious, that people are more important than things and that the measure of every institution is whether it threatens or enhances the life and dignity of the human person.”

That belief flows from the fact that God created us in the divine image.

The idea of the value of humankind is determined solely because we are created in God’s image is found throughout the Bible. Take for example this passage from the Gospel of John, “For God so loved the world that he gave his only Son” (3:16).

God’s love for us was established at our creation. Consider also the parable of the lilies of the field found in the Gospel of Matthew. There Jesus tells his disciples not to worry for God will take care of them: “Look at the birds in the sky; they do not sow or reap, they gather nothing into barns, yet your heavenly Father feeds them. Are not you more important than they?” (Mt 6:26).

The underlying reason why we are more important than the birds is because we are made in the divine image. We carry in our being divine dignity.

Psalm 8 reads: “What is man that you are mindful of him, and a son of man that you care for him? Yet you have made him little less than a god, crowned him with glory and honor” (8:5-6).

The Book of Proverbs echoes this sentiment: “Rich and poor have a common bond: The Lord is the maker of them all” (22:2).

St. Paul also expressed this thought powerfully: “Do you not know that you are the temple of God, and that the Spirit of God dwells in you?” (1 Cor 3:16)

And the First Letter of John reminds us: “See what love the Father has bestowed on us that we may be called the children of God. Yet so we are (3:1).

The prophet Isaiah offers perhaps the most powerful scriptural example making the point of God’s love for us (and the source of human dignity): “Can a mother forget her infant, be without tenderness for the child of her womb? Even should she forget, I will never forget you. See, upon the palms of my hands I have engraved you” (49:15-16).

(Daniel S. Mulhall is a catechist living in Louisville, Kentucky.)