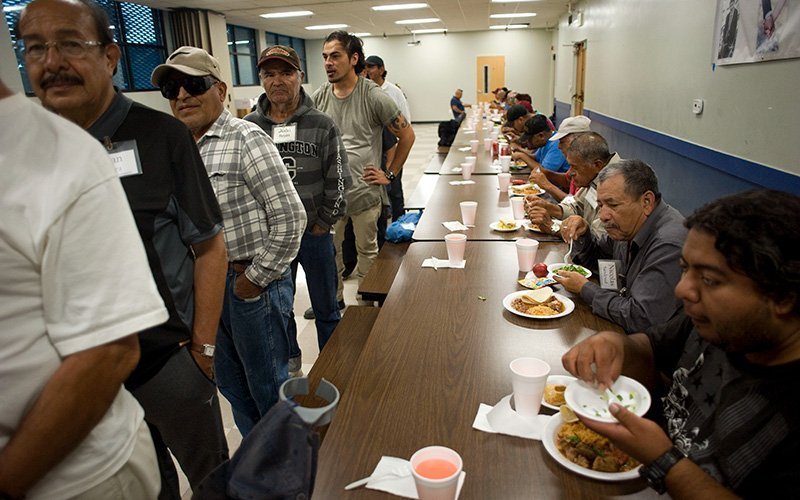 Men eat while others wait in line Sept. 7, 2018, at Dolores Mission Church in Los Angeles. (CNS photo by David Maung)

This is the first of a seven-part series on Catholic social teaching. This package focuses on the life and dignity of the human person.

In recent centuries, dozens (if not hundreds) of church documents containing millions (if not billions) of words address Catholic social teaching. But the essence of this teaching can be boiled down to a mere 10, written in the first century by St. John:

That lone sentence offers a clear framework for how we, as followers of Christ, are called to treat one another. To embrace Catholic social teaching mandates that we, as children of God, respect the God-given dignity inherent in everyone.

And it begins with love.

“Only love is capable of radically transforming the relationships that men maintain among themselves,” states the Compendium of the Social Doctrine of the Church, issued in 2004 by the Pontifical Council for Justice and Peace. “This is the perspective that allows every person of goodwill to perceive the broad horizons of justice and human development in truth and goodness” (No. 4).

St. John Paul II made that point near the beginning of his 1995 encyclical, “Evangelium Vitae” (“The Gospel of Life”).

“Every individual, precisely by reason of the mystery of the Word of God who was made flesh … is entrusted to the maternal care of the church,” said the pope. “Therefore every threat to human dignity and life must necessarily be felt in the church’s very heart; it cannot but affect her at the core of her faith in the redemptive Incarnation of the Son of God, and engage her in her mission of proclaiming the Gospel of life in all the world and to every creature” (No. 3).

The life and dignity of the human person is, in fact, the first of seven “themes” of Catholic social teaching, as articulated by the U.S. bishops’ Office of Justice, Peace and Human Development.

The bishops note that in today’s world and society, human life is “under direct attack” from abortion and euthanasia, while its value “is being threatened” by cloning, embryonic stem cell research and use of the death penalty.

And “the intentional targeting of civilians in war or terrorist attacks is always wrong,” say the bishops. Catholic teaching “calls on us to work to avoid war. Nations must protect the right to life by finding increasingly effective ways to prevent conflicts and resolve them by peaceful means.”

“We believe,” state the bishops, “that every person is precious, that people are more important than things, and that the measure of every institution is whether it threatens or enhances the life and dignity of the human person.”

Pope Francis makes that very point in “Laudato Si’, On Care for Our Common Home”:

“When we fail to acknowledge as part of reality the worth of a poor person, a human embryo, a person with disabilities — to offer just a few examples — it becomes difficult to hear the cry of nature itself,” says the pope. “Everything is connected” (No. 117).

Of course, the most striking and convincing way to teach social justice has less to do with reading about it and much more to do with actually practicing it. Jesus taught and preached endlessly about love and care for one’s neighbor, but what caught the eye of his disciples the most was his equally endless example on how to instill and spread God’s love in the world.

Perhaps no example was more revealing than his encounter with the Samaritan woman at the well (Jn 4:4-42). It is a profound lesson to love as Jesus loves, unconditionally.

For it did not matter to Jesus that the woman he encountered was of a so-called “lower class,” or that she “had five husbands” or that she was a woman or that he was speaking to her in public (actions that would, in the social mores of the time, be considered strikes one, two, three and four).

What mattered was that this woman was a creation of God, with God-given dignity, and therefore worthy of love and respect. It also mattered — to Jesus, certainly — that she was a woman with a heart ready for conversion to a new way of life.

Jesus’ treating the woman at the well with respect — and, just as important, his refusal to assume that her race, gender or occupation defined who she was — is a significant lesson for us all, especially in a time when we all too quickly make assumptions, generalizations and exaggerations about one another.

To do so is to deny one another’s dignity and status as a child of the God who gives us life and the capacity to love — and to be loved. Only by recognizing that each of us has value can we proclaim justice for all.