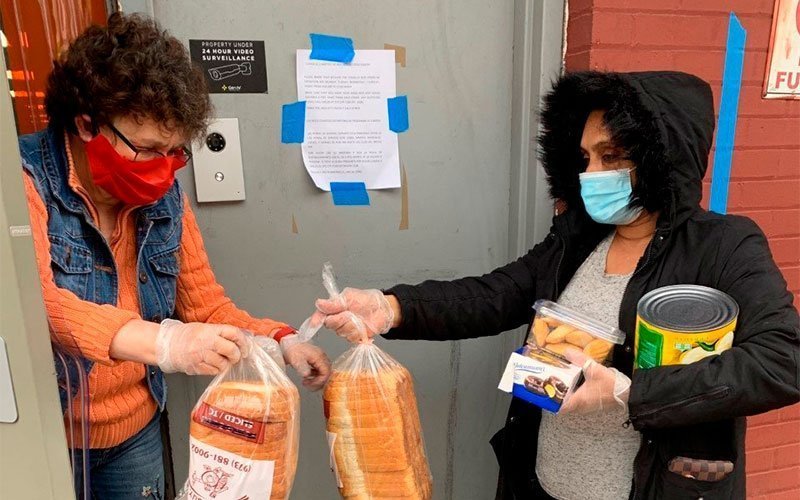 A woman in need picks up food on a July day in 2020 at the Father English Food Pantry in Paterson, N.J., run by Catholic Charities of the Diocese of Paterson. Not to make light of such efforts, but a preferential option for the poor and vulnerable must go way beyond donating instant potatoes and canned ravioli. (CNS photo courtesy Catholic Charities Paterson)

This is the fourth of a seven-part series on Catholic social teaching. This package focuses on the option for the poor and vulnerable.

A man in our parish Bible study expressed his disinterest in the church’s outreach programs to those in need. He capped off his little speech by reminding everyone, “Even Jesus said the poor you will always have with you” (Mt 26:11). His intent, I suspect, was to say that’s just the way it is.

For me this statement was jarring in that it failed to take into account all the other times Jesus emphasized reaching out to those in need (especially Mt 25:31-46). As the leader of the Bible study, my work was cut out for me.

More significantly, however, the man’s words were a reminder that many people have trouble figuring out how to respond to the poor. More than once I have heard it said that if people are poor in a country of opportunity and resources, then it is their own fault.

Consequently, for some it simply does not make sense that the church would go so far as to say that there has to be a preferential option for the poor and vulnerable. Adding the word “vulnerable” may help some. Yet the preferential option phrase is what stops lots of people in their tracks.

Almost any parish has some program for the poor, even if it is simply collecting food for a local pantry at Thanksgiving time. Not to make light of such efforts, but a preferential option for the poor and vulnerable must go way beyond donating instant potatoes and canned ravioli.

The call is for our church to consciously and intentionally bring those on the margins into the full membership of society. That means people have to work for justice that fixes broken systems as well as advocating for the voiceless and powerless.

What’s more, all of humanity can be renewed by this form of inclusion. In his book, “Let Us Dream,” Pope Francis recently wrote, “You have to make for the margins to find a new future.”

After a recent homily in which I used an example of visiting a man in the county jail after he had confessed to a brutal murder, I was surprised to receive a number of supportive emails regarding my outreach.

One woman wrote that her nephew works with inmates because he has come to realize they, too, are among God’s children. In the same note she apologized that she was not yet that open, but she wanted to be.

Maybe that is the starting point, wanting to be open to the fact that people on the edges of our society are still worth our time, still humans. Worth is not based on innocence, or lack of it, nor on accomplishments. Worth comes from the love of God for each person.

The U.S. bishops, in their “Economic Justice for All” pastoral letter, added the element of the common good as both a reason for and a result of focusing on the poor. It’s not simply that the poor and vulnerable need assistance, but working to help them is a way to allow for the good of everyone in society. They, too, can be contributing members of society.

Even when people agree with the church’s option for the poor, the question is where to allow this position to take them. Simply put, people begin with awareness of who is vulnerable and who are the poor. A growing consciousness can lead to action, but people have to get beyond news headlines and political talking points.

For several years our parish has conducted mission trips to the U.S.-Mexico border. With the help of parishes in southern Texas, our volunteers have worked with refugees as they were released from detention centers. Most were incredibly traumatized from both the journey to this country and the detention center itself.

Those who went on these trips often were following an unspecified inner desire to reach out to families in crisis. Participants often came back desiring to do more than simply helping for a week.

They were moved in profound ways to support immigration reform and to articulate the need for humane treatment of refugees. They had opportunities to talk about their experiences; some have become active in community groups.

It also became clear that the whole parish community needs to be reminded of the plight of refugees around the world. Consequently, we often have included petitions at Mass for all the millions of immigrants fleeing violence and war. We have consistently brought this population to people’s attention.

In addition to awareness, there has to be the development of a new attitude toward others. In a world where many people create us-vs.-them divides, this new way of looking at life tries to see others as sisters and brothers. It takes more than clever phrases to help people get beyond biases, but homily examples, parish hospitality plans and ongoing outreach efforts can help.

Whatever a congregation chooses to do, it has to integrate into its very fabric this awareness and response to the poor and vulnerable. It cannot simply settle for an occasional collection or activity.